Accessibility links
Community Keeps Calm Despite Questions About Wal-Mart Shooting Peaceful protests have taken place since police shot and killed a black 21-year-old who was holding a toy gun while shopping in Ohio. But new questions are being raised about the handling of the case. 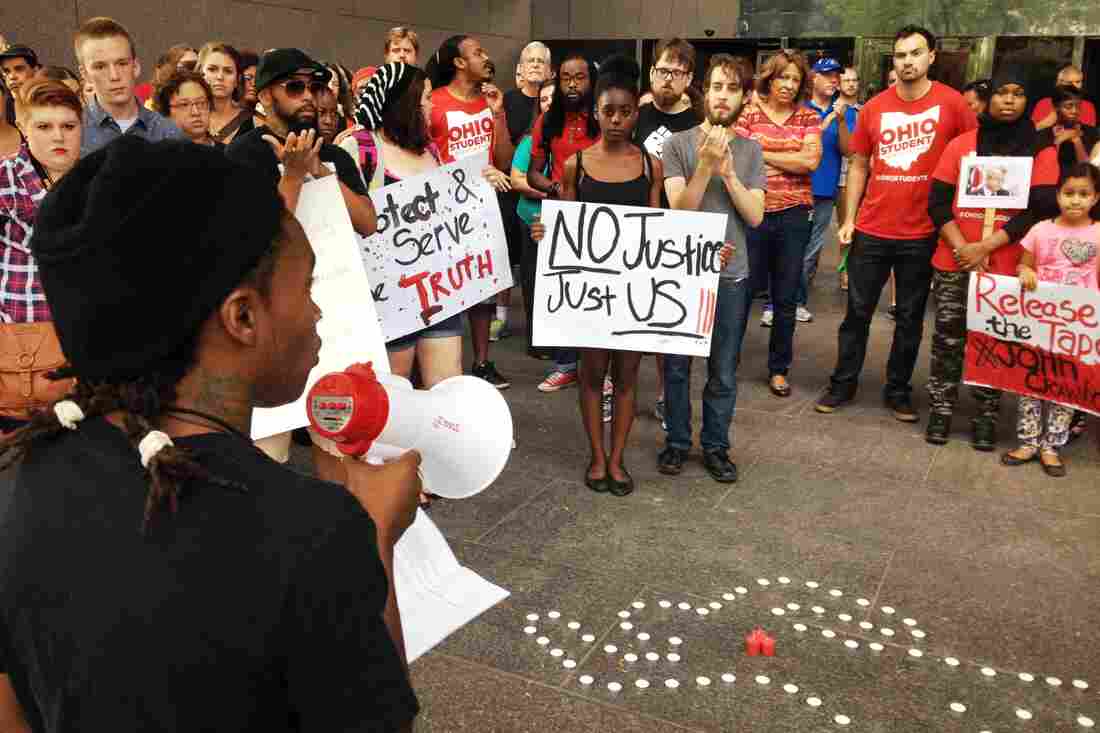 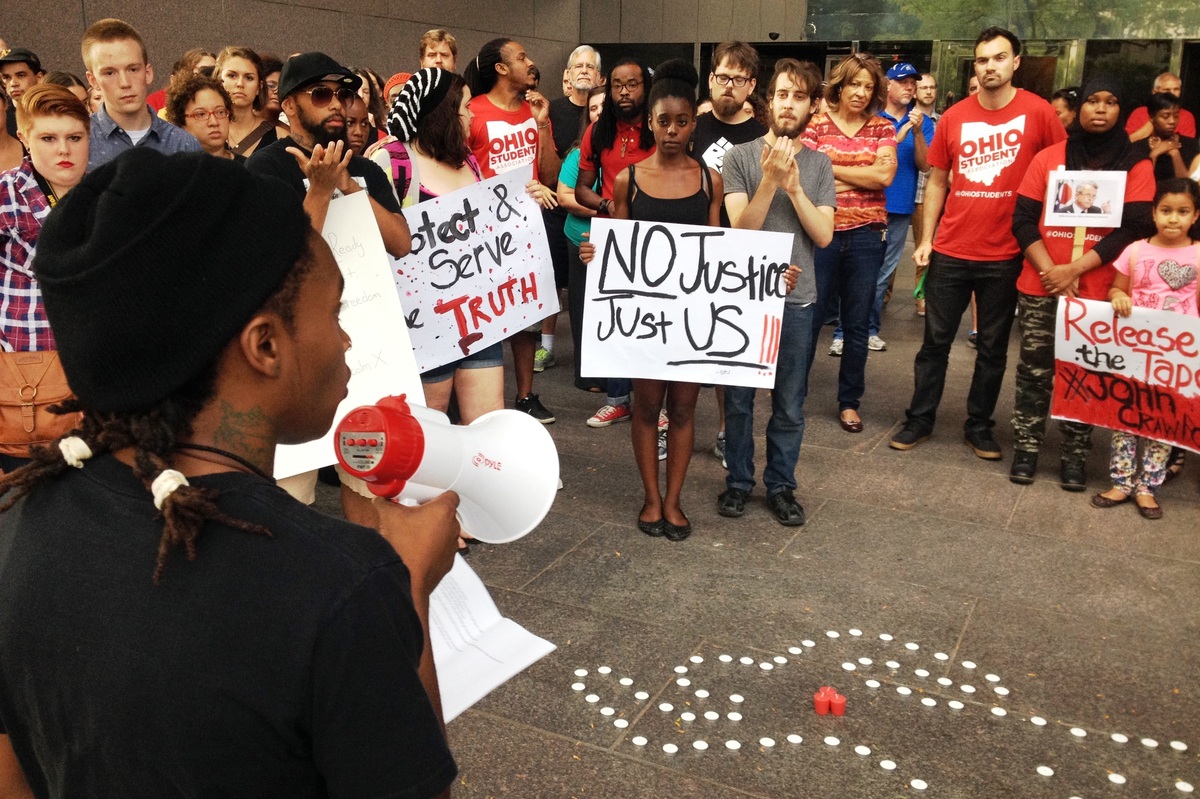 Members of the Ohio Student Association gather outside Ohio Attorney General Mike DeWine's office in Columbus last month to call for the release of in-store video in the fatal police shooting of John Crawford III.

While the police shooting of an unarmed black 18-year-old in Ferguson, Mo., continues to get considerable attention, another shooting of a black man by white police officers, near Dayton, Ohio, has been met with a more measured response.

Beavercreek, Ohio, is a mostly white, moderately affluent city of about 40,000. On Aug. 5, 22-year-old John Crawford III of nearby Fairfield was shopping at a Wal-Mart there.

While inside the store, and on the phone with the mother of his two young children, Crawford stopped in a toy aisle and picked up a Crosman MK-177 air rifle BB gun — an item Wal-Mart sells.

Crawford held the BB gun while walking and talking on the phone. He was unaware that another customer inside the store had called 911.

The first two officers on the scene say they gave Crawford two chances to drop the gun and then fired their weapons when he did not comply. Crawford was hit in the torso and died of his injuries a short time later.

Crawford wasn't the only casualty. Shots fired by police created panic, and 37-year-old Angela Williams collapsed in the store and later died.

Beavercreek Police Chief Dennis Evers said his officers reacted appropriately. "The quick response from officers was instrumental in containing this situation and minimizing the risk to customers," Evers said.

The Crawford family demanded to see Wal-Mart's in-store surveillance videos, but DeWine's office refused, saying that would compromise the investigation.

DeWine's office says it has collected significant evidence and spoken with at least 50 witnesses. Last month, the attorney general showed a portion of the video to John Crawford's family.

"Like all of us, Mr. Crawford's parents have questions about how this tragic event unfolded, and I felt it was only right that they be included as early as possible in this investigation," DeWine said.

"This was the unjust killing of John Crawford," Wright said. "There's absolutely no indication that the police gave Mr. Crawford any kind of signal. And let me make the caveat, in the event they did give a signal to Mr. Crawford, he was not aware, because the video does not show him turning towards the officers or even acknowledging their presence."

Since Crawford's death, peaceful protests have taken place, including one rally in support of Beavercreek police. But just last week, new questions were raised about the way DeWine's office is handling the case.

At issue is the testimony of Ronald Ritchie, who called 911.

In an interview with the U.K. newspaper The Guardian, Ritchie says DeWine's office showed him the video of Crawford's killing, and he recants his claim during the 911 call and to reporters after the incident that Crawford was threatening other customers.

DeWine's office would not confirm whether Ritchie was shown the video.

Attorney Michael Wright says if that's the case, then the investigation has been compromised and the Crawfords want federal prosecutors to intervene. Evidence will be presented to the grand jury next week.

Earlier audio and Web versions of this story identified the 911 caller as Richard Ritchie. He is Ronald Ritchie.