Accessibility links
Homeless Vets: They're Not Just Single Men Anymore Overall, there are fewer homeless veterans these days. But that good news is tempered by the growing number of homeless vets with families, including many women. 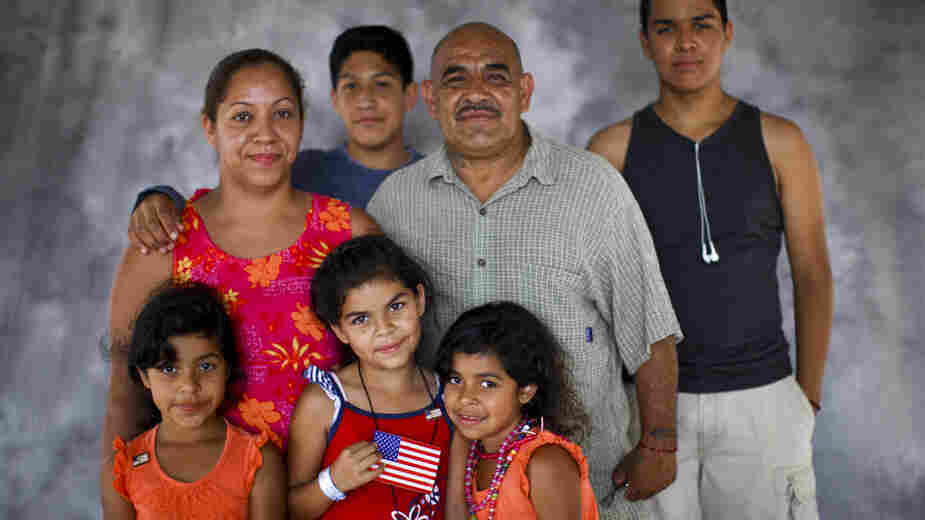 Alexander Morales, who served in the Army in the 1970s, with his family: wife Roberta; Elvia, 7, Elena, 8, and Elvira, 7 (in front), and Ruben Verdugo, 13, and Aaron D. Huerta, 17 (in back). Morales' family has been going for years to the Stand Down event in San Diego, where veterans receive assistance. David Gilkey/NPR hide caption 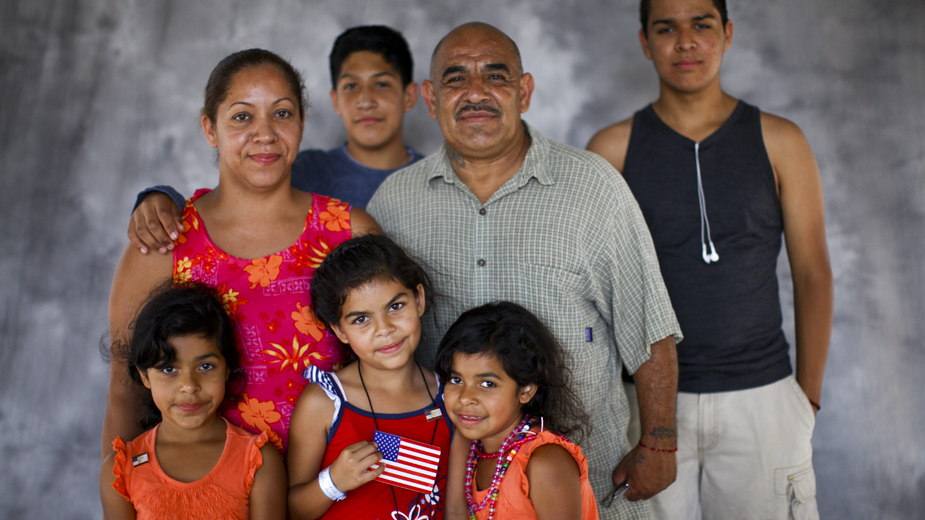 Alexander Morales, who served in the Army in the 1970s, with his family: wife Roberta; Elvia, 7, Elena, 8, and Elvira, 7 (in front), and Ruben Verdugo, 13, and Aaron D. Huerta, 17 (in back). Morales' family has been going for years to the Stand Down event in San Diego, where veterans receive assistance.

Every summer for 27 years, a small tent city has popped up in San Diego. "Stand Down" is a three-day oasis for homeless veterans, with showers, new clothes, hot meals, medical help, legal aid and a booth set up for every housing program in the city.

"They've got the kids zone and everything. My kids live out here very happy. They're looking forward to it from last year," says Alex Morales, who served in the Army in the 1970s.

Morales, his wife and their five children have come here for nine years running — the kids practically grew up here. Some years the family had transitional housing, sometimes they had jobs — but they always needed some help.

What Do Homeless Vets Look Like? Nine conversations from a pop-up photo studio at Stand Down.

After seeing attendance rise for most of a decade, Stand Down this year saw a slight drop in the overall number of vets they served. Yet the numbers grew for families and female veterans needing help.

"This year I've seen a huge number of families — more than I've ever seen before," says Darcy Pavich, who directs Stand Down. "The number of children has probably doubled from last year."

The trend matches the nationwide numbers. The Obama administration announced last month that veterans' homelessness is down a third since 2010. There are now about 25,000 fewer veterans living without housing compared to four years ago. 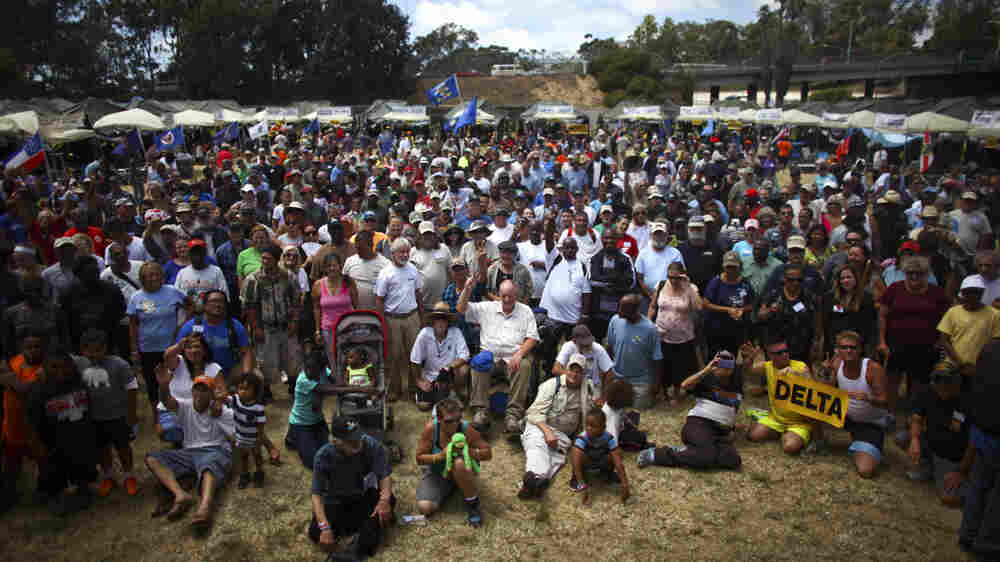 Stand Down is a three-day event offering services to homeless veterans in San Diego. There has been a slight dip in overall attendance in recent years but a rise in the number of families and women attending. David Gilkey/NPR hide caption 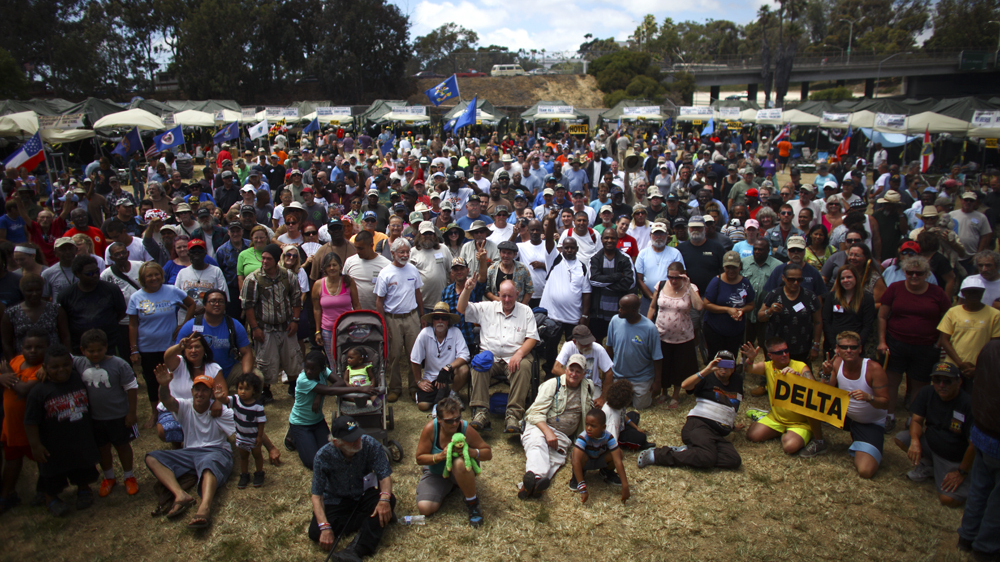 Stand Down is a three-day event offering services to homeless veterans in San Diego. There has been a slight dip in overall attendance in recent years but a rise in the number of families and women attending.

An Ambitious Goal For Next Year

The White House has vowed to eliminate chronic homelessness among vets in 2015. But the number of homeless female veterans, often with children, is creeping upward.

"I've only been homeless for a month this time — this time around," says Kim Porter, as her 4-year-old son sits squirming on her lap.

Porter says she first became homeless after getting out of the Navy and getting divorced. Then she started going to school through the GI bill, which includes housing. But this summer she didn't take classes, and without the housing stipend, she was back on the street.

"It could happen to anybody, actually. There's a lot of vets that I've met out here, some girls in particular. It's just a recession. It hits everybody," she says.

Female veterans have had an even harder time than men in recent years. Unemployment is higher than for male vets. With more women than ever serving in the military, more of them end up homeless in a tough economy. The National Coalition for Homeless Veterans (NCHV) estimates that the number of female vets on the street more than doubled from 2006 to 2010.

"Things like sexual assault, having a high unemployment rate, being disabled, women who have a screening for an anxiety disorder or PTSD; it's not necessarily causal, but women homeless tend to be experiencing those factors," says Baylee Crone of NCHV.

Finding Homes Is The Top Priority

The Department of Veterans Affairs has made homelessness a priority, but for years the outreach focused on the veteran, not the family, and that has consequences, says Darcy Pavich.

"If a veteran's in one of our programs and they relapse, and breaks the policy of the program, and their family's with them, we have to throw the whole family out. Because the VA is paying the program for the veteran to get the services, and then we have to find supportive services for the families," she says.

Most homeless people slip in and out of housing, sometimes just one missing paycheck or one bit of bad luck away from sleeping on the street. Just getting out of the military into a tough job market can be enough to push veterans over the line, and that often means their families too.

"We were having troubles paying the rent. I had two young sons," says Navy wife Tracy Sturgis. "[My husband] got out of the Navy and I was unemployed. I couldn't find work."

Sturgis and her family have been coming to Stand Down every year since 2004. This year her husband has a job, so he didn't come. They've been homeless three times over 10 years.

The VA is funding programs for families, including $300 million announced in August in grants called Supportive Services for Veteran Families.

It's part of the "housing first" approach. That means getting vets safe and dry before worrying about their other problems, like drug and alcohol abuse. That can halt a spiral that does more damage to a veteran's health and job prospects with each year on the street. It saves lives and money in the long run, says Dennis Culhane, who directs the VA's National Center on Homelessness.

"The whole federal strategy is: Get housing as soon as possible so folks don't end up in a downward cycle and in a condition of chronic homelessness," he says. "A lot of these younger veterans in particular are employable. There's a definite emphasis on trying to get people back into the workforce, not stuck in the quote-unquote 'homeless system.' "

Darcy Pavich credits the housing-first approach for the recent progress, but she's not sure the resources are there to meet the White House goal of ending chronic homelessness among vets by next year.

"I think what they've done is they've made a great start, recognizing that if we can get people off the streets and into a place, we've made step one. There's another hundred steps that have to happen," she says.