Accessibility links
When The Power's Out, Solar Panels May Not Keep The Lights On With the price of solar panels falling, more municipalities and homeowners are installing them. But having solar panels doesn't mean you won't lose power in a blackout — at least not yet. 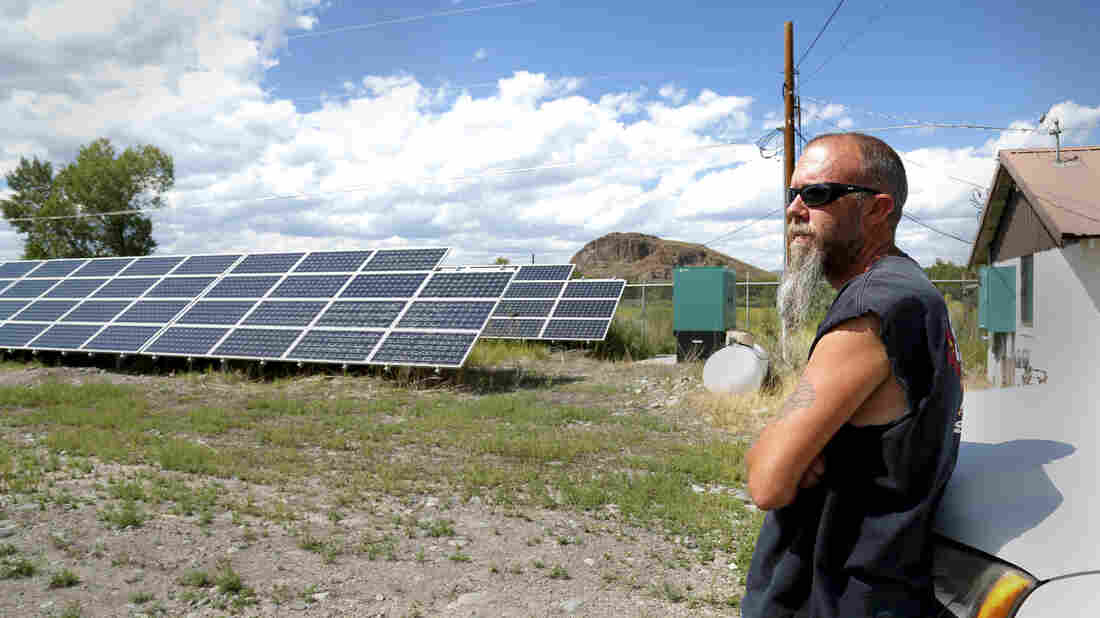 In Del Norte, Colo., Public Works Supervisor Kevin Larimore shows off solar panels that provide electricity for the town's water supply. Despite generating its own solar energy, the town is still at risk of a blackout if its main power line goes down. Dan Boyce/Inside Energy hide caption 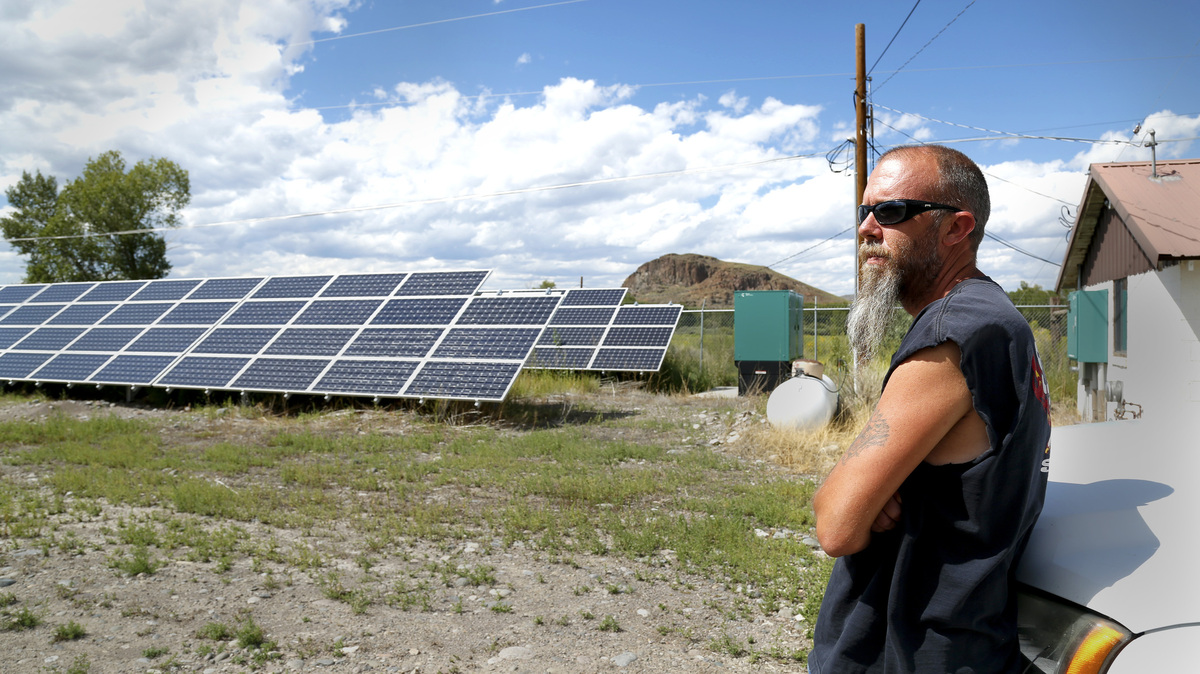 In Del Norte, Colo., Public Works Supervisor Kevin Larimore shows off solar panels that provide electricity for the town's water supply. Despite generating its own solar energy, the town is still at risk of a blackout if its main power line goes down.

The cost of solar panels is falling rapidly in the United States. And as the panels become more affordable, they're popping up on rooftops around the country.

Meanwhile, the U.S. is trying to find better ways to back up its power system against blackouts. And while it may seem counterintuitive, more solar power does not mean fewer blackouts — at least not yet.

The tiny town of Del Norte, in southwestern Colorado, is a perfect example. Despite being covered in solar panels, Del Norte is still at risk of losing power if its main power line goes down.

The answer to that conundrum, analysts say, is finding a way to let clusters of solar panels operate independent of the main power grid.

More On The Power Grid

You can read more of Dan Boyce's coverage of solar panels and microgrids here.

A Solar-Powered Town, Kind Of

Look out at the forests on the mountainous edges of southwestern Colorado's San Luis Valley, and you see a dull orange hue: broad swaths of dead trees killed by the spruce beetle.

Conditions were different back in the mid-1990s, when Larry Floyd started fighting fires here. "We didn't have as severe a drought, we didn't have as much bug kill," he explains. But today, with those dry, dead leaves, there is a lot more wildfire fuel out there.

That's a concern for Del Norte. Set in the middle of the open, flat, desertlike San Luis Valley, it's far from the forests. But fire still poses a risk to the power supply here, says the town's public works supervisor, Kevin Larimore.

Most of the valley is served by one major line, coming through the mountains and into the valley. "If that line was to go down, then most of the valley, I think, would lose electrical power," Larimore explains.

That's despite the solar panels on the town hall, the town shop and the police department.

Turns out, Del Norte's solar panels are actually dependent on the power grid. And that's how it is with the vast majority of solar panels, explains James Newcomb, a managing director at the Rocky Mountain Institute, a renewable energy think tank in Boulder, Colo.

New Jersey, Newcomb notes, has hundreds of megawatts of solar power. But during Hurricane Sandy, which thrashed the East Coast in 2012, there were widespread blackouts — sometimes for weeks — despite all those solar panels "because it's been connected to the grid in a way that it can't operate if the grid isn't up," he says.

That's frustrating for community planners, who have to stare out at rooftop after rooftop of useless solar panels during these blackouts.

Newcomb says the system has been designed this way on purpose, to protect workers. Essentially, he says, officials "have built the grid and operate it as one big system." If workers are fixing power lines after a blackout, the lines need to be dead; solar energy can't be running up the wires the wrong way.

But it is possible to fix this problem, Newcomb says. "The transition we're now talking about is one that makes it possible to operate some smaller pieces of the grid independently."

What he's talking about are known as microgrids: tiny grids that can power not just a town's water supply, but even an emergency shelter or a hospital.

To create a microgrid, you need what are called "smart inverters." These sense when the larger grid has gone down and lock off the part that needs to be fixed. It could then use the local solar panels to power emergency services.

Del Norte, Colo., still has "dumb" inverters, so the town has to rely on a diesel generator to back up its drinking water, at least.

The technology to create microgrids is advancing, however. Green Mountain Power, a utility in Vermont, is working on what it says is a first-of-its-kind microgrid powered entirely by solar panels.