Accessibility links
MacArthur Fellow Terrance Hayes: Poems Are Music, Language Our Instrument Hayes, a professor of writing at the University of Pittsburgh, was recognized for "reflecting on race, gender, and family in works that seamlessly encompass both the historical and the personal." 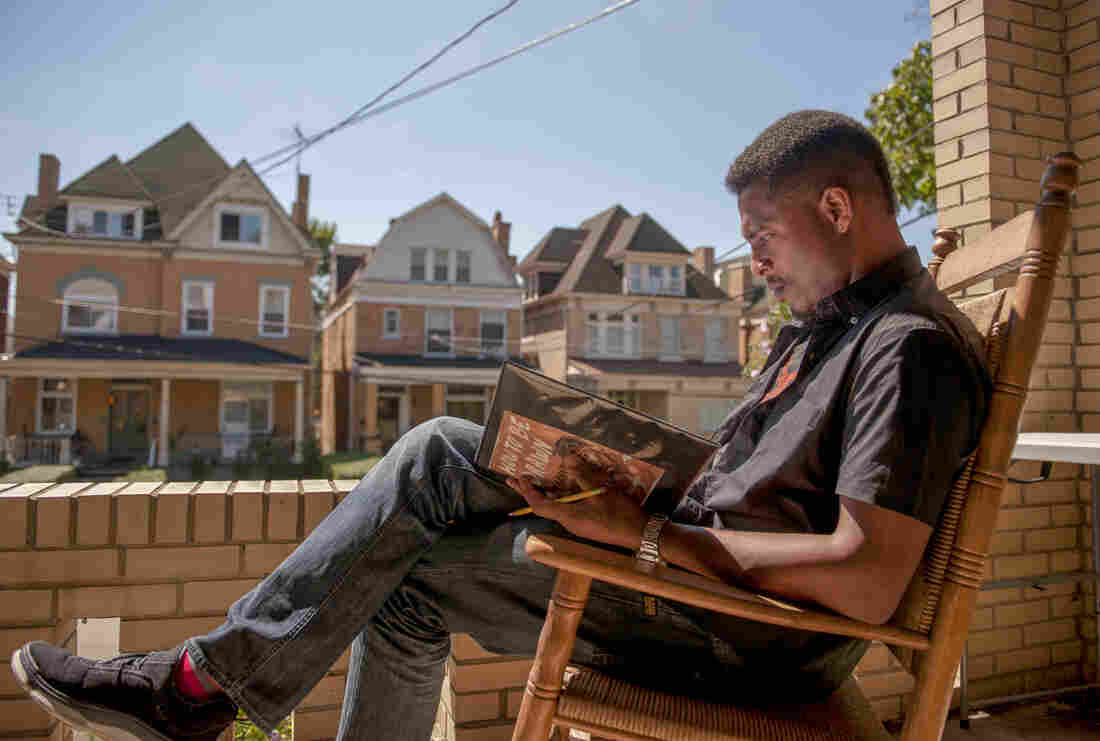 "I became a poet in Pittsburgh," says, poet and University of Pittsburgh professor Terrance Hayes, pictured above at his home. Courtesy of the John D. & Catherine T. MacArthur Foundation hide caption

On Wednesday, poet Terrance Hayes was named one of 21 MacArthur Fellows. Hayes, a professor of writing at the University of Pittsburgh, was recognized for "reflecting on race, gender, and family in works that seamlessly encompass both the historical and the personal and subvert canonical forms."

Hayes' poems play with ideas of music, visual arts, race, history and popular culture. In his poem "The Blue Seuss," he mixes the well-known childhood refrain of "one fish, two fish, red fish, blue fish" with images of American slavery. It begins:

Blacks in one box

Blacks in boxes stacked on shores

Blacks in boxes stacked on boats in darkness

Blacks in boxes do not float

Blacks in boxes count their losses

Blacks with masters in the houses

Blacks with bosses in the fields

Click here to read the rest of "The Blue Seuss."

"The idea of the box is a kind of interesting image, both for me as a poet, and, you know, historically speaking," Hayes tells NPR's Melissa Block. "What do boxes do for poems, and what do they do for our people?"

Well, you know, I wouldn't say I push against it. I think it's a bonus. It's a thing that makes me additionally interesting, is what I would say. So, black poet, Southern poet, male poet — many of those identities I try to fold into the poems and hope that they enrich them.

On Pittsburgh featuring prominently in his poetry, even though he's originally from South Carolina

I became a poet in Pittsburgh. When I lived in the South I was a basketball player and primarily a jock. An English teacher essentially suggested that I send the poems that I'd been writing — really just for him — to a few programs, so that when I wound up in Pittsburgh, it's where I figured out that I could actually be a poet. And so, much of my identity is tied up into the city and my experiences in the city.

Note: This video contains language that some may find offensive.

On the relationship between poems and music

Poems are a form of music, and language just happens to be our instrument — language and breath. But I would say, you know, people say that I'm a musician. I would just say I try. That's always — I try to play, I try to engage music, and I think if I could really play music, I don't know if I'd be a poet. So, I think, in the absence of knowing how to play a guitar or a cello, I thought, well I can play words. I know words. They're cheap, they travel very easily, and so that became my primary instrument.

On his poem "Arbor for Butch" from his book Lighthead

It's broken in several pieces, but this is just one paragraph that sort of gets into both my interest in music and questions about identity. Primarily, the poem is about traveling to the South, and sort of reconnecting with the South. But also, reconnecting with my father, my biological father, who ... I didn't know until I was in my 30s. And so, this is just one section about what I thought I was looking for:

Sometimes my body is a guitar, a hole waiting in wood, wires
trembling to sleep. To identify what you are, to be loved by what
you identify, I thought This is how the blood sings into the self.
I thought what was hollow in me would be shaped into music.

Click here to read the rest of "Arbor for Butch."