Accessibility links
Movie Review: 'Tracks' | Mia Wasikowska takes a long and lonely trek across the Australian desert in a film that leaves her character a bit unformed, but features a strong central performance and a surprising friendship. 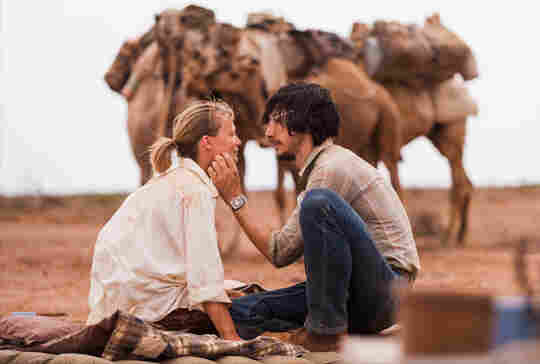 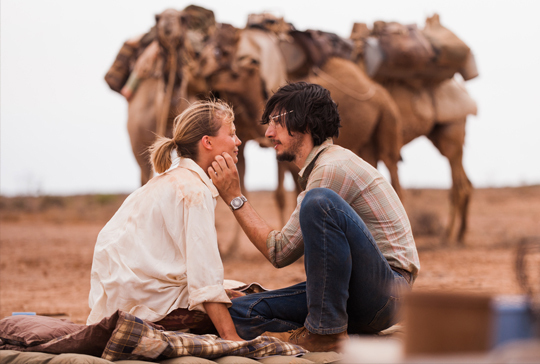 Scenic and a touch bloodless, Tracks is a tastefully off-Hollywood version of the upcoming Wild. Wild is bound to make a lot more noise, and not just because it has Reese Witherspoon in the lead as a grief-stricken Cheryl Strayed hiking the Pacific Crest Trail to get over her beloved mother's death. Tracks is a little too subdued for its own good.

There's a lost mother here, too, tucked away in a quick late flashback along with the loss of a beloved pet. But early on in Tracks, which is based on Robyn Davidson's best-selling memoir of her 1975 trek across 2,000 miles of Australian desert, the truculent adventurer, played by Mia Wasikowska, announces that her only motive for undertaking her journey through such unforgiving terrain was, "Why not?"

Fair enough: For many explorers of unforgiving terrain, nature offers itself primarily as an obstacle course to be subdued. And "why not?" sounds like a cue for a happening adventure yarn, yet Tracks is neither fish nor fowl: The patient, slow-burning style so well-suited to director John Curran's 2008 Somerset Maugham adaptation, The Painted Veil, doesn't translate as well here in a film that dithers between action-adventure, half-baked character study and intimidating scenery.

Wasikowska makes a fine Robyn, adding this fierce wanderer to her otherworldly readings of Alice in Wonderland and Jane Eyre. Skinny and rangy in shapeless '70s hippie-wear, she gives an intensely inward performance that concedes nothing to femininity, and subtly hints at the deep emotional turmoil to be expected from a woman who chooses to go it alone.

But beyond an occasional explanatory voiceover — all too often a lazy substitute for inner life — there's little to fill in the gaps between Robyn's account of herself and the filmmakers' sense of what else drives her. Screenwriter Marion Nelson's overly expository dialogue reduces Robyn to an explorer-type daddy's girl we've met before, trudging diligently through the heat and dust, throwing off cliches. She feels "at home nowhere"; says "nice people confound me"; and adds that "when it's just me and my animals in the desert, I feel free."

Mostly, though, Robyn puts one foot doggedly in front of the other, armed with little more than four camels, her faithful dog, a hunting rifle and a plaintive soundtrack. Refusing all help other than that of the Aboriginal natives and a few rugged whites, she plugs along through sandstorms, unbearable heat and dusty foliage.

I could watch those snooty-looking camels forever, but Tracks isn't meant to be a travelogue, and I wanted to know more about this woman, whose encounters with a massive snake, deer and endless windstorms prove far less upsetting to her than the crowd of ill-behaved reporters and photographers who foul up her journey.

I haven't read Davidson's book, so I don't know whether she really had a night of wild sex with National Geographic photographer Rick Smolan, whose company was foisted on her in return for the sponsorship that made her trek possible. But I do know that every time Rick (beautifully underplayed by Girls' Adam Driver) comes within a half-mile of Robyn, he quickens the movie's pulse no end.

The role-reversing moment when Robyn disabuses Rick of all expectations arising from their one-night stand is one for the ages. And yet — gangly, awkward and far too chatty for Robyn's taste, Rick soon shows himself one of those rare men who, even after romantic rejection, happily assumes the mantle of unshakably loyal and forbearing friend. For Robyn, he's the village that it takes, and we don't see that often enough, on or off screen.