Accessibility links
Book Review: "Velocities" by Stephen Dobyns | Tuesday is the first day of fall. This time of year reminds critic Abigail Deutsch of Stephen Dobyns' "How to Like It" — a poem about a man who ponders his lost summers and fleeting dreams. 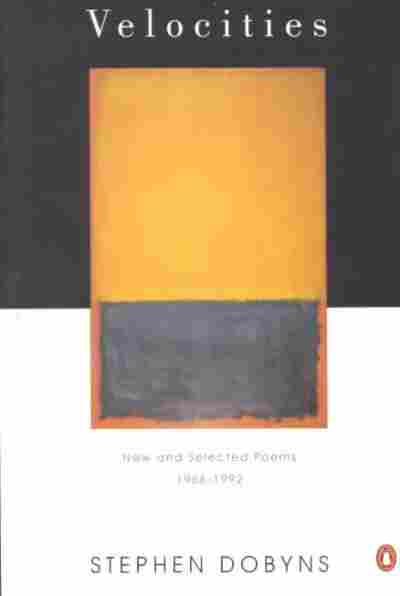 This time of year always reminds me of a wonderfully autumnal poem called "How to Like It," by Stephen Dobyns. Set in "the first days of fall," the poem describes a man whose summer seems long over: Old memories weigh on him, and new adventures feel just out of reach.

But that doesn't stop him from dreaming of one. He envisions a long road trip in heart-rending detail, from the "dusty smell of the car heater" to the pines by "the edge of the shoulder" to the triumphant moment when, "at dusk he'll crest a hill / and there, filling a valley, will be the lights / of a city entirely new to him." The richness of the fantasy suggests how much he wants it to come true.

The man imagines all this movement while standing still — in front of his house, accompanied by his dog. His dog, surprisingly enough, can talk. While the man doesn't speak his desires aloud, the dog does verbalize its wishes. And it has a lot of them. "Let's go downtown and get crazy drunk. / Let's tip over all the trash cans we can find." "Let's dig holes everywhere."

Perhaps the dog is a projection of the man, a canine id that reveals its owner's basest desires. Either way, the man generally ignores the dog's hopes — a poignant reflection of his tendency to ignore his own.

The poem concludes with a final instruction from the pet:

... Let's go make a sandwich.
Let's make the tallest sandwich anyone's ever seen.
And that's what they do and that's where the man's
wife finds him, staring into the refrigerator
as if into the place where the answers are kept --
the ones telling why you get up in the morning
and how it is possible to sleep at night,
answers to what comes next and how to like it.

It's an unsettling account of an unsettled man — and as chilling as autumn weather.

Abigail Deutsch is a writer based in New York. Her last article was about her hunt for the author of an anonymous couplet on a New York City park sign.