Accessibility links
Not My Job: Travel Guru Rick Steves Gets Quizzed On Steve Ricks Since we specialize in asking people things they know nothing about, we've decided to ask Rick Steves three questions about the people out there in the world who have his name, but reversed. 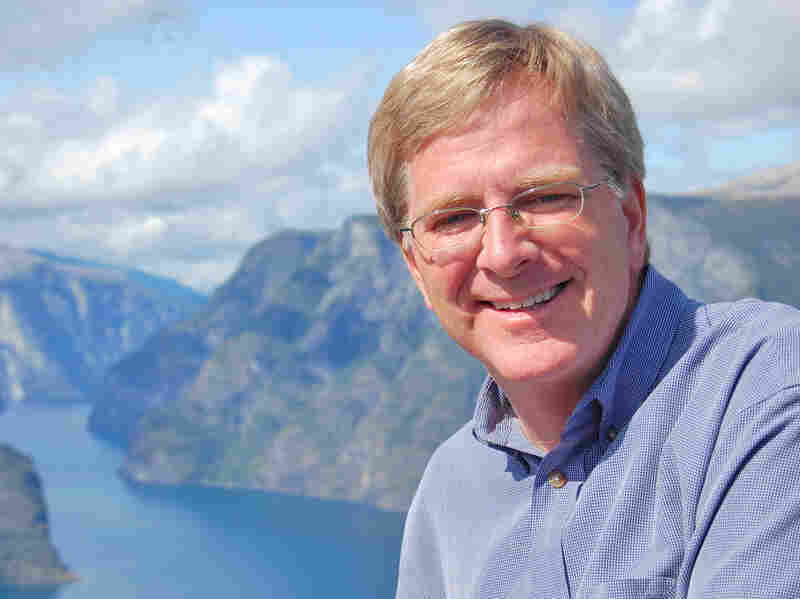 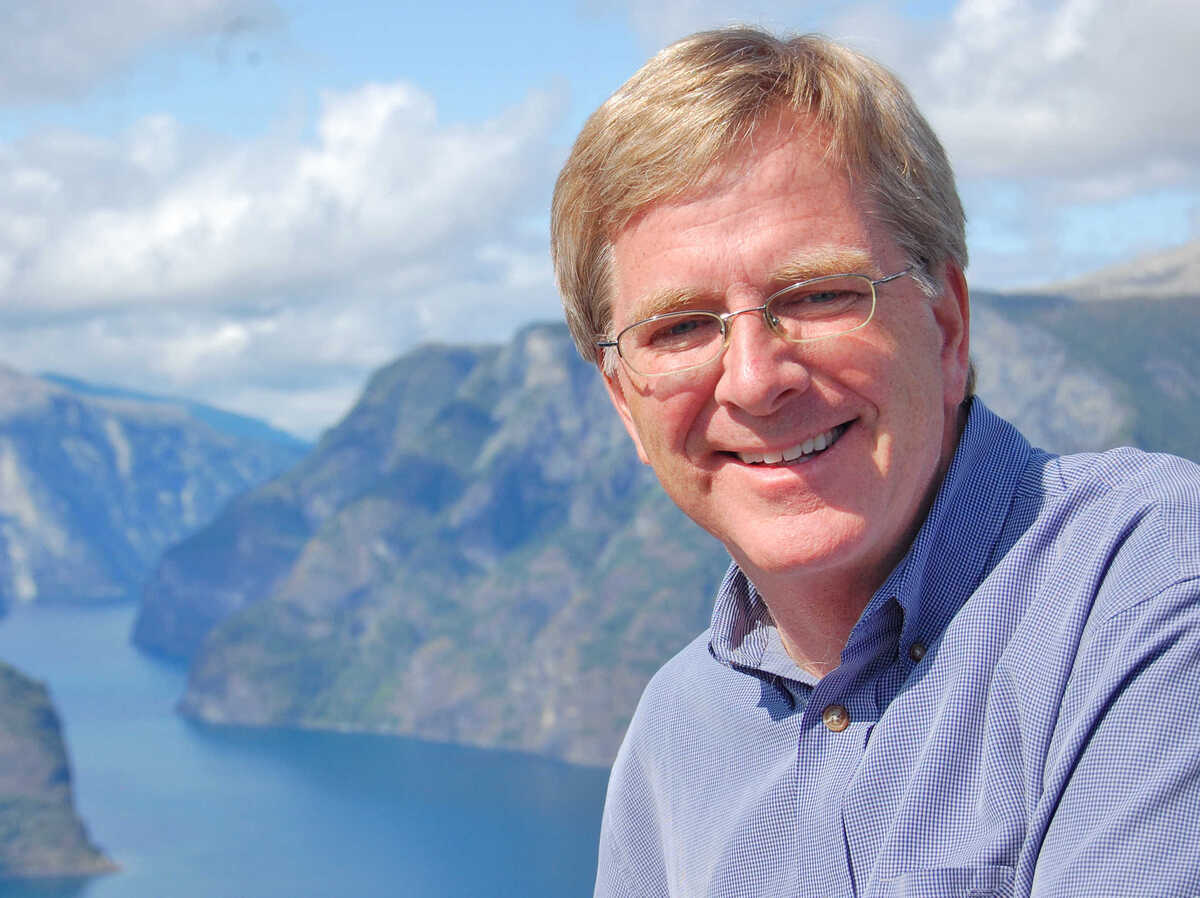 Travel guru Rick Steves was born and raised in Seattle, where we're taping our show this week, but he didn't stay put for long. Steves spent most of his adult life traveling the world, writing a series of guidebooks, hosting a travel show for PBS and ruining some of Europe's most treasured cities with hordes of Americans following his advice.

Since we specialize in asking people things they know nothing about, we've decided to ask Rick Steves three questions about people out there in the world named Steve Ricks.

And now the game where people who have seen the treasures of the world take a detour to see something dumb, we call it Not My Job. Rick Steves was born, raised and still lives in the Seattle area, but that doesn't mean he doesn't get around. He spent most of his adult life traveling world. He wrote a series of best-selling guidebooks. He hosts a travel show for PBS, and he has ruined some of Europe's most treasured sites by sending hoards of Americans who follow his advice. Rick Steve's, welcome to WAIT WAIT, DON'T TELL ME.

SAGAL: So you were born here in Seattle - Edmonds, Washington?

SAGAL: Half hour north of here. And you live right near where you grew up, right?

STEVES: I can look out my window at work and see my junior high school. Didn't go very far.

SAGAL: And did you enjoy junior high school? Is that why you stuck around? 'Cause I never want to see mine again to tell you the truth.

STEVES: Well, I never thought about Europe when I was in junior high.

SAGAL: I understand. And you've made your name specifically as a guide to Europe. So what was it about Europe the first time you went that you were like, oh, this is what I want to do. I could come here for the rest of my life?

STEVES: You remember a long time ago there was roots, and everybody was tracking their roots and wanting to see tombstones with their names on it stuff like that?

STEVES: That's right. Yeah. And that didn't do anything for me but I wanted to find my cultural roots, which happed to be in Europe. So I got over there and it was quite interesting. There was different candy, different pop. I remember statuesque women in Germany with hairy armpits.

SAGAL: You're a 14-year-old boy. You go over to Germany like oh, they have different candy, and then you notice the women with hairy armpits.

STEVES: It had quite an impact on me.

SAGAL: I can imagine. You made a career out of it. Now you are - you have these very large number of fans, people who follow your books and - were best-selling and your TV shows and your specials on PBS - and they're called Ricknics?

SAGAL: Yes. Why not Steveorinos?

STEVES: 'Cause my people have a lot of picnics.

STEVES: And I don't know. I don't actually know where that came from, but I hear it a lot. And I guess there's a lot people that are looking for somebody to sort through all the superlatives and tell them if you got limited time, do this and not that. Normally people are just raving about everything, but that doesn't help you. You know, I'm tired of hearing people.

SAGAL: So do you actually say - I mean, will you tell people, you know, everybody goes over here, don't go over there. It's terrible. It's a tourist trap. Avoid it.

SAGAL: Like, give me an example. Tell the world some place they shouldn't go that they think they might need to go.

STEVES: Americans have the shortest vacations in the rich world, and if you've got a short vacation, which we generally do, and you're going to England, which is part of the UK...

SAGAL: Tonight is a continuing education.

STEVES: I'm assuming you have enough time for one great university town. So the question is not is Oxford good or bad? The question is, is Oxford or Cambridge better for your trip? And I think Cambridge is more fun as a sightseeing place.

SAGAL: There you are. It is in fact very lovely. Oxford is more urban.

STEVES: And then you save time for something entirely different.

SAGAL: I see. Has anybody ever mistreated you? I'm sure it happens, you travel all over the world and people have treated you rudely or ripped you off. And then you say to yourself in your best Emperor Palpatine voice, I shall destroy you.

STEVES: I got in a little bit of a tiff with the tourist people in the little town of Vicenza in Italy because they wouldn't provide a place for travelers to check their bag for the day if they're side tripping in from Venice.

STEVES: Which is like less than an hour away by train. And for two or three years, I came back and I said all of these people with my book are coming to your town and there's no place for them to leave their bag. They're not going to spend the night, they just want to check the bag for three hours and if you don't have a place to check bags at the train station, I'm going to take you out of my book. And I finally had to take Vicenza - the entire town out of my book because they wouldn't do that at the train station.

SAGAL: And did it fade into the mist like "Brigadoon"?

STEVES: The whole town just disappeared. That was the end of it.

SAGAL: It's destroyed. There's just - there are tumbleweeds rolling down the streets. And there are no tumbleweeds in Italy. You brought them somehow. That's an immense power, Mr. Steves.

STEVES: Well, it's fun to do that.

POUNDSTONE: Do you ever - when you are dealing with somebody and maybe the tourist board isn't agreeable, do you ever just say one word - Vicenza?

POUNDSTONE: Just want to say one word to you - Vicenza.

STEVES: You know, the problem with...

SAGAL: Have you ever heard of a town called Vicenza? Right. You know why not?

SAGAL: Now people who have seen you in PBS might be surprised to learn that in addition to your travel, you're a huge pot advocate, right?

STEVES: I worked on that for 10 or 12 years now. I'm a board member of NORML. And I'm very proud that Seattle - or Washington State and Colorado have legalized marijuana. Now we have a new sort of sense of what the lower 48 means. Now there's 48 states that are still working on this, but...

SAGAL: But, I mean, does this - I mean, does your advocacy in this issue ever sort of conflict with your vast audience and readership? I mean, would they be surprised to know this?

STEVES: Yeah, once in a blue moon somebody will email me and say I know what you think about marijuana and we're not going to take your tours or read your guidebooks. And all I can think is Europe's going to be more fun without you.

SAGAL: So this - this marijuana enthusiasm explains why your top recommendation of things to do in Paris is just sort of look at the sky.

SAGAL: I'm glad you found that funny. Thank you very much.

STEVES: I've been there.

SAGAL: Well, Rick Steves, it's a pleasure to talk to you. We've asked you here to play a game we're calling...

BILL KURTIS, BYLINE: You're Rick Steves, what do you know about Steve Ricks?

SAGAL: Despite your many travels, Rick Steves, you've probably never crossed paths with many people in the world named Steve Ricks. So we're going to ask you three questions about these people who are sort of your reverse doppelgangers. Get two right, you'll win a prize for one of our listeners - Carl Kasell's voice on their voicemail. Bill, who is Rick Steves playing for?

SAGAL: So we got on Google and we found that there is a, quote, "bespoke tailor" out their named Steve Ricks. What is Steve Ricks tailor - what is his specialty? A, custom tailored hazmat suits, for discerning emergency workers; B, exact replicas of the outfits of each of the 11 different "Doctor Whos" - I think we're up to 2 now; or C, custom-made and custom-fitted codpieces?

STEVES: The only one I can really envision is C.

SAGAL: You're going to go with C.

SAGAL: All right, so you still have two more chances. There is a number of musicians out there named Steve Ricks, including one whose art form is what? A, mix tapes to listen to while you're stoned...

SAGAL: Well, you just sing all the songs, I guess, in a much lower register. But move on.

STEVES: OK, I'll go with just to keep up with the theme, A.

SAGAL: You're going to go with A - mix tapes to listen to while you're stoned. That's the answer.

SAGAL: You have more than just your names in common. All right. This is exciting. You have one more. If you get this right, you'll win. Deep down in the Google results we found a Steve Ricks mentioned in what book? A, "The Mammoth Book Of Killers Still At Large."

SAGAL: B, "How To Make Anything Out Of Masking Tape;" or C, "A Man, A Plan, Another Canal: Gowanus."

STEVES: I love the idea of masking tape. I'll go with B.

STEVES: Is that what it was?

SAGAL: You ever use masking tape?

POUNDSTONE: It didn't sound like a confident response you got from Peter there.

SAGAL: "The Mammoth Book Of Killers Still At Large."

POUNDSTONE: Good for you.

SAGAL: If you're sleeping too well, I recommend to you "The Mammoth Book Of Killers Still At Large." Don't worry, Mr. Ricks is merely a witness to a victim's disappearance, not actually one of those killers. Bill, how did Rick Steves do on our quiz?

KURTIS: Two out of three, so he's going to have a happy trip next time.

SAGAL: Well done. Congratulations. Rick Steves is America's best-selling guidebook writer and host of the public television show, "Rick Steves Europe." Rick Steves, thank you so much for joining us on WAIT WAIT ...DON'T TELL ME.

STEVES: What a pleasure. Thank you.

(SOUNDBITE OF SONG, "I'VE BEEN EVERYWHERE")

SAGAL: Support for NPR comes from NPR stations and Lumber Liquidators, supporting the Ronald McDonald House charities, the National Braille Press and NPR. Information at lumberliquidators.com. Subaru, featuring the all-new Subaru Outback. Love, it's what makes a Subaru a Subaru. Learn more at Subaru.com. And Angie's List, where consumers can browse, buy, and schedule local services online. More and angiestlist.com.

We'll be back in a minute with more WAIT WAIT ...DON'T TELL ME from NPR.