Accessibility links
As Run-Ins Rise, Police Train To Deal With Those Who Have Mental Illnesses As the availability of mental health services has declined, many police departments have trained Crisis Intervention Teams to respond to people with mental illness. 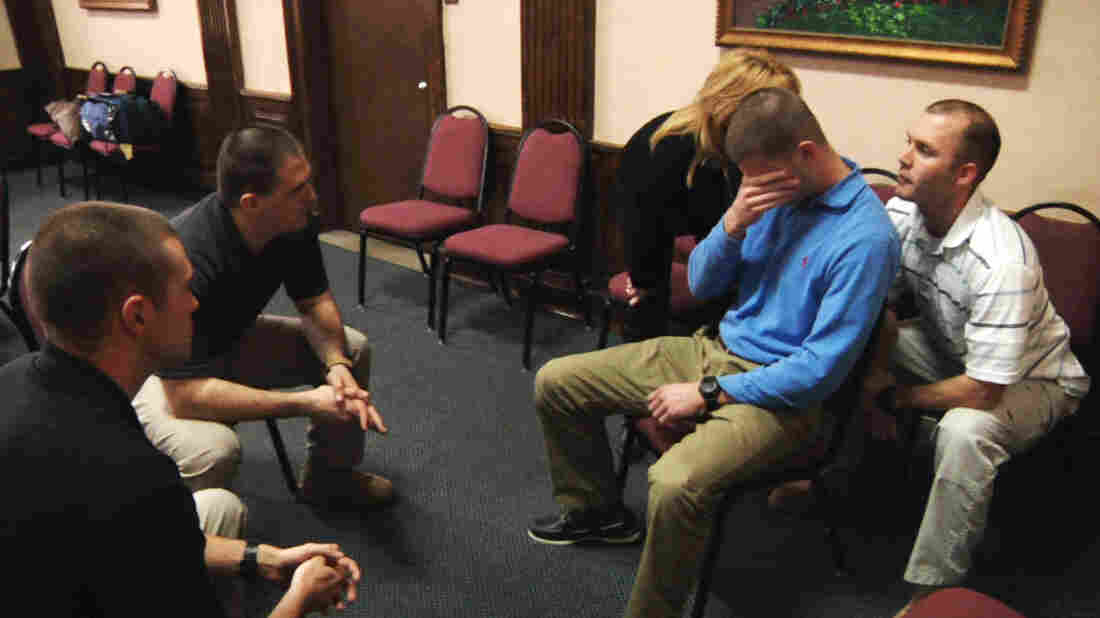 In this image taken from video on Jan. 15, police officers Edward Sarama (from left) and Robert McGuire try to talk to officer Matt Dougherty, who is pretending to be mentally ill, during a training simulation at Montgomery County Emergency Service in Norristown, Pa. Michael Rubinkam/AP hide caption 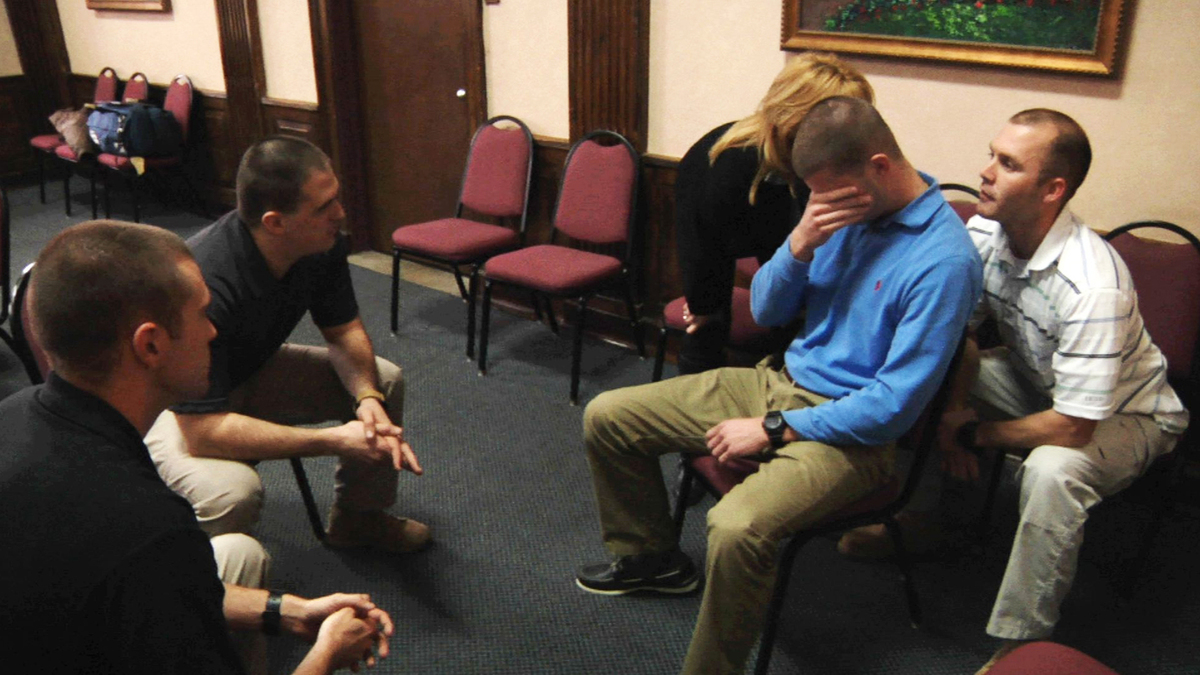 In this image taken from video on Jan. 15, police officers Edward Sarama (from left) and Robert McGuire try to talk to officer Matt Dougherty, who is pretending to be mentally ill, during a training simulation at Montgomery County Emergency Service in Norristown, Pa.

A number of high-profile police shootings, including that of Michael Brown in Ferguson, Mo., last month, have led to increased scrutiny of police interactions with civilians.

One group that is disproportionately subject to police uses of force is people with mental illness. Many local departments hold special sessions to train officers about mental illness and how to help the people they interact with.

Walking up and down the aisle of a police academy classroom in downtown St. Louis, Lt. Perri Johnson tells the officers here that responding to calls where a person is in mental distress is never easy.

"You're going to get plenty of opportunity to utilize some of the things that you learn," Johnson says.

The "tactical communications" lecture is part of a weeklong Crisis Intervention Training, or CIT. Officers are taught to recognize different types of mental illness and to calm situations where someone feels threatened or may react violently.

"You'll see bipolar disorder, schizophrenia, various versions of that," he says. "What we see a lot of is people who haven't been diagnosed, and they may be taking drugs, they may be drinking to mask those issues."

When Cop Calls Involve The Mentally Ill, Training Is Key

Johnson says he tells his students that most of all, they need to use compassion.

"Lower your voice so that that person becomes comfortable, but at the same time you're keeping an eye on their movements, on their hands. Know where the doors are in case you need to get out quickly," he says.

In the late 1980s, police in Memphis, Tenn., shot and killed a man threatening suicide with a knife. Outcry about the incident led to developing the Crisis Intervention Team model, which now is used by almost 3,000 local and regional departments.

Local providers for mental health services, including the National Alliance on Mental Illness, work closely with departments to develop the curriculum.

Richard Stevenson is with that group. He says it's important for officers to know where they can take a person to get help. Almost 90 percent of St. Louis CIT calls end with a person being taken to the emergency room or another treatment facility.

"Because it is helpful, because it is successful, no one hears anything about it," he says. "There's not much great news value to an officer who does an effective job at calming a situation down and getting help for the person who is in distress."

Linda Teplin, who teaches psychiatry at Northwestern University, says that in the decades following the closure of some state mental hospitals and the decline of funding for mental health programs, police officers often have found themselves acting as "street psychiatrists."

"The issue is, what is happening to these people, who in past years, in a past era would have been treated in the mental health system, and now are not receiving treatment and are in the street?" Teplin says.

This means people with mental illnesses now have more contact with law enforcement, are more likely to be arrested, Teplin says, and, in very rare cases, are hurt during police encounters.

An analysis of St. Louis-area CIT reports shows that on average, officers used force in about 4 percent of cases, most often with a Taser or constraint. Last month, a St. Louis CIT-trained officer shot and killed 25-year-old Kajieme Powell, who police say rushed toward officers while carrying a knife, imploring them to shoot him.

Sgt. Jeremy Romo says in some cases, officers must respond to people who are a danger to themselves or to others.

"We train officers that — don't do any actions yourself that would further escalate that situation," Romo says. "But in some situations, the situation has evolved and gone so far downhill that the officer's safety, or citizen's safety, takes a priority."

Romo says when force is used, particularly lethal force, there's something else that comes to mind.

Romo says demand for CIT training classes has increased. But he notes that the greatest need appears to be not in cities but in rural areas, where mental health services often are scarce.