Accessibility links
From Sideman To Star: A New Film Captures Jimi Hendrix's Pivotal Year Jimi: All Is By My Side focuses on the year Hendrix changed his name and recorded his first album. Director John Ridley and star André Benjamin (a.k.a. André 3000) talk about portraying the guitarist. 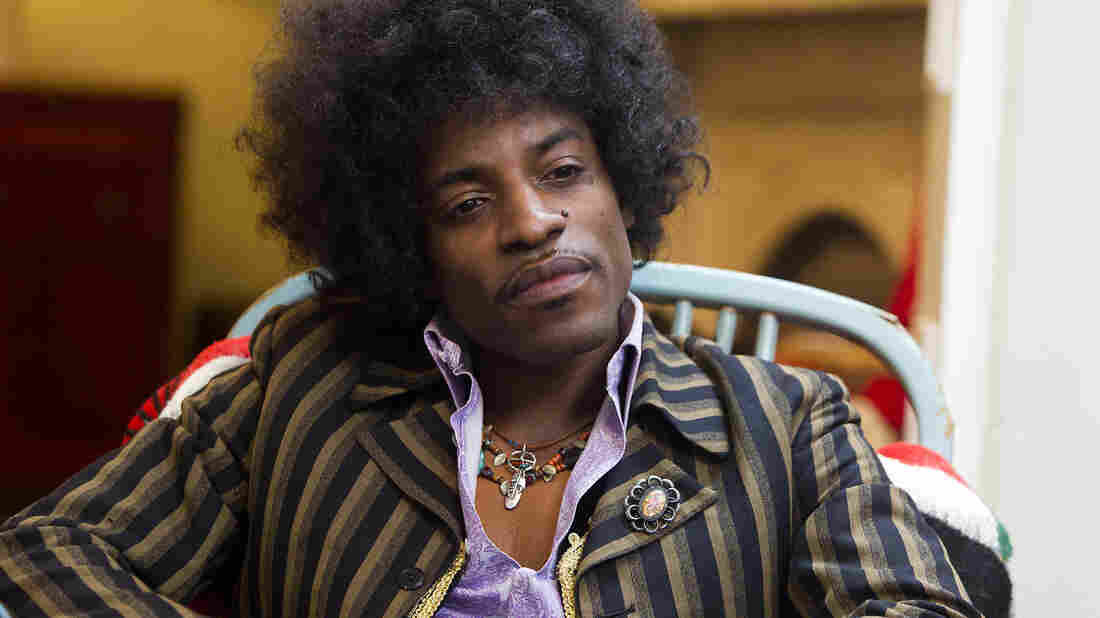 André Benjamin plays Jimi Hendrix in the new film Jimi: All Is By My Side. Patrick Redmond/Courtesy of Open Road Films hide caption 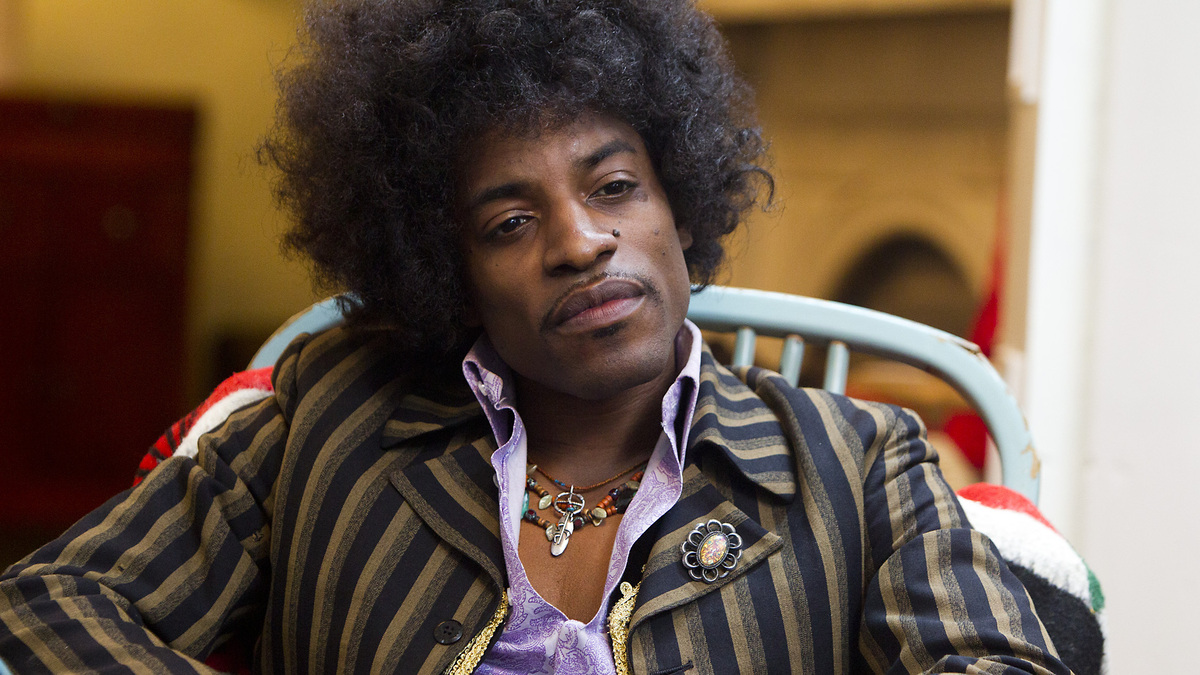 André Benjamin plays Jimi Hendrix in the new film Jimi: All Is By My Side.

In 1966, Jimmy James, a guitarist working as a sideman in R&B bands, is discovered by Linda Keith, a 20-year-old music insider. She helps him move to London, where he developed his own sound. During that year, he transformed himself into an electrifying performer known as Jimi Hendrix.

Hendrix formed his band The Jimi Hendrix Experience, recorded his first album Are You Experienced, and soon became a star.

A new biopic, Jimi: All Is By My Side, focuses on this year in Hendrix's life. It's written and directed by John Ridley, who won an Oscar for his screenplay for 12 Years A Slave.

"To me, Jimi is a consummate artist," Ridley tells Fresh Air's Terry Gross. "He wasn't so much about going out and trying to please a crowd, but trying to create something that brought people to his vision for music, his vision for life, the way he expressed things." 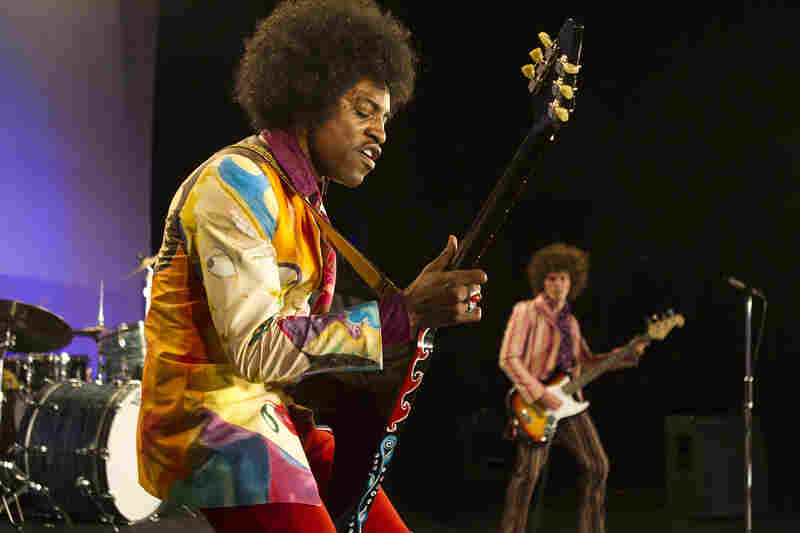 A right-handed guitar player, André Benjamin says he had to learn how to play with his left hand in order to accurately portray Hendrix. Patrick Redmond /Courtesy of Open Road Films hide caption 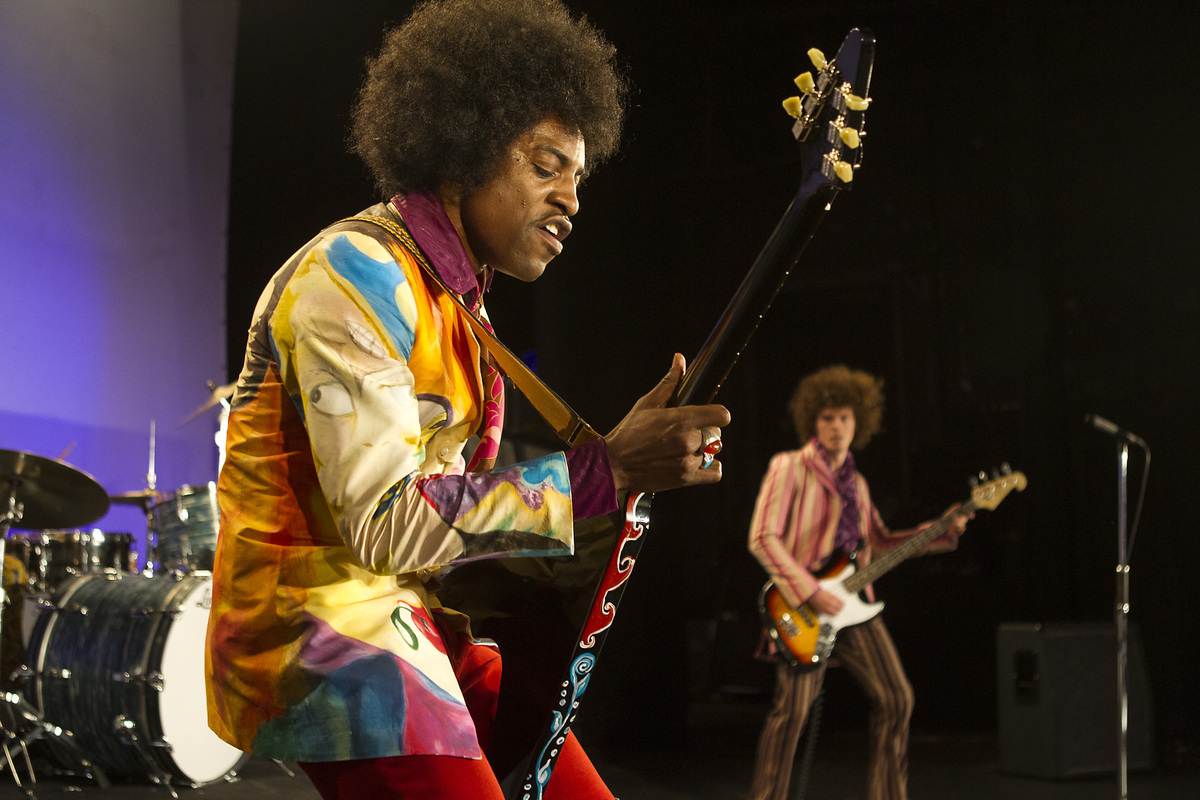 A right-handed guitar player, André Benjamin says he had to learn how to play with his left hand in order to accurately portray Hendrix.

In 1970, Hendrix died of complications related to a drug overdose. He was 27.

The film stars André Benjamin, who performs under the name André 3000 and co-founded the hip-hop group OutKast. He's also acted in the films Be Cool, Idlewild and Four Brothers.

Benjamin does his own singing in the film. But you don't get to hear any songs written by Hendrix, because Ridley wasn't able to get the rights to those songs.

Benjamin says that playing Hendrix was a challenge, in part, because he had to learn how to play guitar left-handed — and alter his Southern accent to sound like Hendrix, who was from the Pacific Northwest.

"I worked with a vocal coach, listened to a lot of interviews ... in my headphones repeatedly," he says. "At one point in time, I was walking around with a wine cork in my mouth ... because Jimi, he protruded his mouth forward and he talked with a lisp, kind of."

On Hendrix as an artist

John Ridley: One of the things that was very interesting to me, particularly as I found out more about him as a player, he never ... liked to play the same thing the same way. There's an expectation from an audience to do this thing that you're known for, and I think it's really a remarkable individual who appreciates the people who like his music ... but at the same time feels like, "I need to give you what's inside of me, not just what you think you want."

André Benjamin: I had to learn everything from playing behind my back to playing with my teeth to rolling around on the ground playing. I watched all the footage and I mimicked everything to a T, just to have it in the arsenal, just in case we needed it.

On how Hendrix worked on his stage presence

John Ridley: It was one of those things where he had an innate quality, and if people were really looking at the way he played and how he played, you could see it. If you are an individual and you end up in spaces where continually you are told to not be individualistic, you're not going to get ahead that way. Just play the game and fit in — after a while that kind of beats you down. ...

One of the things that people would stay to him is, "You've got to sing. You've got to take ownership of your performances." And he never really liked his voice, and one of the people who really encouraged him, [British Vogue model and the girlfriend of The Rolling Stones' Keith Richards] Linda Keith, would say to him, "Look, [Bob] Dylan doesn't have a great voice, either, but it's not about the sound of his voice. It's about the passion that he puts into his singing." And it really helped drive [Hendrix] to a place where he had more confidence and took more ownership of the material.

On artists being different onstage and offstage

André Benjamin: I think with a lot of performers, and you'll see it, it's kind of like Cowboys and Indians if you're a child — the stage is the place where you go for it, and then when you're offstage, you can be a completely reserved individual. I'm that way.

Sometimes onstage, you're just going and having a good time and seeing where you can go with it, because it's the place where you're just open.

Comparing it to Cowboys and Indians, if you're in your room and you're having this war in your head, and you've got these toys ... as soon as Mom opens the door, the veil is lifted. You're back to the normal world. Once the amps go off and you walk down the steps from the stage, it's a different thing; you're back into reality in a way.

On living a 'double life'

André Benjamin: My upbringing was kind of odd, because it was kind of like a double life. [I lived] on the west side of town of Atlanta, across the street from [the projects], and I would get on the bus. And there was [a program] where they would take kids from these neighborhoods and take them to Buckhead, where the mayor's kids and the governor's children would go [to school]. So I would go to Sutton Middle School. So I would be coming from this side of town, going to this other side of town, being turned on to white bands and skateboarding and all that kind of stuff. It was almost like a double life. I'm actually glad my mom did it that way, so I could see two sides of everything.