Accessibility links
Book Review: 'Afterworlds,' By Scott Westerfeld | Scott Westerfeld's latest book is about a teen who writes her own YA novel. Westerfeld alternates chapters about her life with chapters of her novel. This book honors YA tropes as it subverts them. 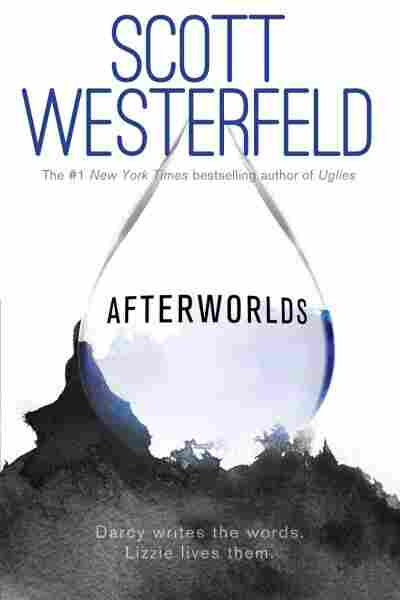 YA is thriving, but it's become a diverse genre, linking books widely spread across more traditional classifications like mainstream literature, fantasy, mystery and romance. What these books often have in common is their unremitting fondness for ordinary, everyday people — just like the reader, perhaps — who become Chosen Ones by suddenly discovering they have powerful abilities, or a unique birthright, or a complicated, passionate love triangle forming around them.

Scott Westerfeld's new novel, Afterworlds, finds an interesting way to honor these beloved tropes while also coyly subverting them. His protagonist, ordinary-everyday San Diego 17-year-old Lizzie Scofield, is caught up in a terrorist attack at an airport and plays dead to survive. She wants so desperately for the terrorists to mistake her for a corpse that she actually wills her consciousness into the underworld, becoming one of a select few who can freely travel back and forth to the land of the dead. In one exceptional moment, she becomes exceptional herself.

But Lizzie isn't the only teenager in the book representing a fantasy. Ohio 18-year-old Darcy Patel, whose chapters alternate with Lizzie's throughout Afterworlds, is living her own dream: She invented Lizzie and her story in a frantic burst of writing during NaNoWriMo and sold the resulting novel (also called Afterworlds) and its untitled, unwritten sequel for a six-figure advance. While Lizzie is living the dream of discovering a hidden world where she's a powerful figure, Darcy is living the dream of moving to New York with a hefty nest egg, meeting her YA writing heroes, and trying to make it as a full-time author. Both girls represent strong fantasies of independence, excitement and significant responsibility in fresh new worlds.

Westerfeld, author of the New York Times best-selling Uglies series and the popular steampunk Leviathan series, has a comfortable way of spinning out boldly imaginative scenarios. Taken on their own, though, both halves of Afterworlds might seem thin. Lizzie's pursuit of a young ghost and an old mystery, and her romance with a dreamy spirit guide named Yamaraj, both leave little time to fully explore Westerfeld's fascinating underworld, or the questions and conflicts that emerge there. Lizzie's story resolves in a rush that underlines Darcy's rush in writing it. Meanwhile, Darcy's budget woes and impostor syndrome feel like mundane concerns in such a heady fantasy of early success and financial independence.

But the two stories complement each other well and provide plenty of variety between supernatural spice and grounding real-world exploration. And the mixture between the two reaps rewards as readers get to see Darcy struggle over plot issues in her chapters, then resolve them through Lizzie's chapters. Westerfeld plays with YA conventions via Darcy, who worries about young-adult-novel cliches and thinks she might be cheapening her own culture by turning the Hindu lord of death into a seductive teen love interest. A stronger version of Afterworlds might dig deeper into those ideas, instead of skimming lightly across them for flavor.

But any book lover should be able to relate to Darcy's frustration with her publisher, who wants a happier ending for her book, so a franchise can follow. And Westerfeld has an easy out for any flaws in Lizzie's side of the book: Darcy is a young, inexperienced author. For instance, her relationship with Yamaraj seems insubstantial and heavily romanticized because it's being written by an 18-year-old who's just learning about love herself.

In fact, while Lizzie's story is briskly thrilling, it's ultimately more valuable as a window into Darcy's mind and her own young-adult-novel-driven fantasies of being extraordinary and impressive. Just as Rainbow Rowell used excerpts from her protagonist's fan-fiction in her recent Fangirl to expose a rich inner life at conflict with a more banal day-to-day existence, Westerfeld puts a girl on the page alongside her own dreams, and turns both stories into wish-fulfillment enjoyment for his readers. There's plenty of space left for sequels in both halves of Afterworlds: Like Darcy's demanding publisher, readers may hope this book branches out into a full-fledged franchise.