Accessibility links
'Black-ish' And The Color Of Money The new comedy Black-ish not only addresses itself to race in a way not many sitcoms do, but does the same with socioeconomic class. 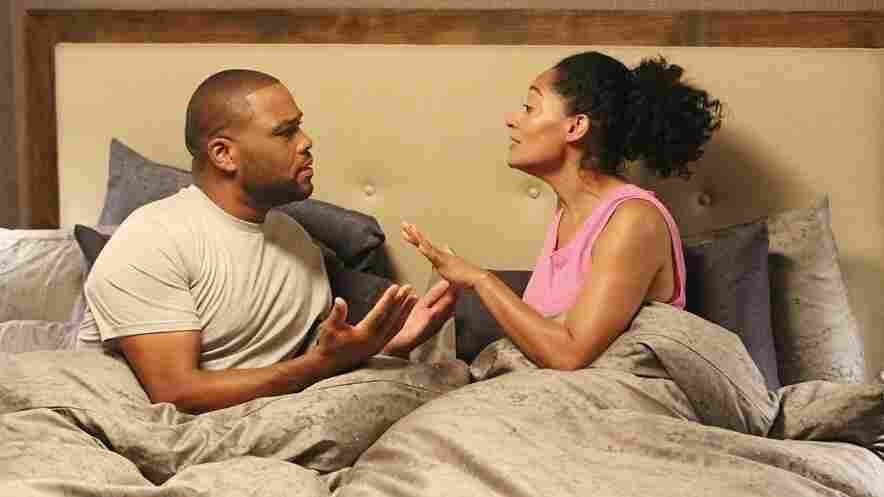 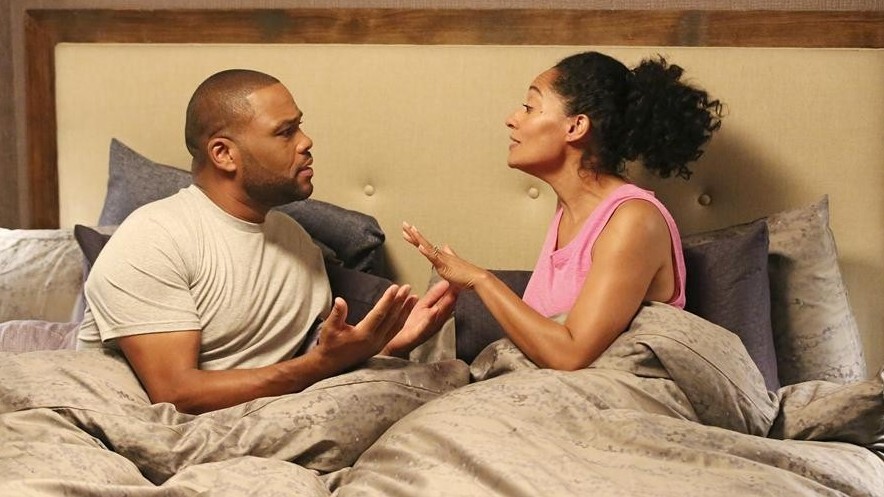 That's one of the opening lines of the pilot of ABC's Black-ish, which follows the Johnson family, led by ad executive Andre (Anthony Anderson, whose line that is) and doctor Rainbow (Tracee Ellis Ross), who live with their four kids and Dre's father, referred to simply as Pops (Laurence Fishburne). As Karen Grigsby Bates discussed on today's Morning Edition and as Eric Deggans mentioned on Monday, the show represents an interesting evolution in sitcoms about black families, which actually do go back to well before The Cosby Show, but which haven't been all that common on broadcast networks in recent years.

While the racial politics of Black-ish are interesting and feel pretty fresh (especially for a broadcast show), what's even more unusual is Dre's mention of money. What makes the show interesting and the comedy more pointed, for me, is that there's a candor about the way that having money affects Dre and Rainbow's sense of who they are and how they're raising their kids that's very uncommon in a world where the obviously rolling-in-dough families on Modern Family, for instance, almost never discuss it.

That's not to even mention, of course, the many much-maligned examples of people living in palatial New York apartments they would never be able to afford in their proffered professions, from everyone on Friends to Carrie Bradshaw on Sex and the City, who was somehow supporting herself in high style and hot shoes by writing one column for one outlet, rather than living in a closet with four roommates and a cockroach infestation.

Black-ish concerns itself largely with the way Dre's sense of racial identity intersects with the introduction of wealth. When I asked about this at press tour over the summer, producer Larry Wilmore (who will unfortunately be largely exiting his work on the show once his Comedy Central show begins) said, "Class is as much an issue, probably even more so now in some ways, for families that have 'arrived,' as you will, no matter what the culture is. Can be a more profound discussion than race and culture in some ways. ... When you talk about black privilege, that isn't something that people are always accustomed to seeing, especially in comedy."

Indeed, Dre feels so conspicuous in his tony neighborhood that he imagines himself being pointed out to a tour bus full of white people as the guide says over the loudspeaker that he and his "mythical and majestic black family" are "out of their natural habitat, and yet still thriving." Not exactly Key and Peele, necessarily, but for broadcast television, that's a surprisingly sharp-edged joke about a pretty insidious and condescending form of prejudice: the bestowing of specialness for not meeting other people's pernicious expectations.

His introductory voiceover (which is too flatly expository of the show's point of view, but so are many pilots) explains that he worries that in trying to "make it," black people have dropped elements of culture that have been grabbed up by white people. "They even renamed it 'urban,' " he says. "In the urban world, Justin Timberlake and Robin Thicke are R&B gods, Kim Kardashian's the symbol for big butts, and Asian guys [seen hip-hop dancing in a YouTube clip called 'Kick-Ass Asian Dance Moves'] are just unholdable on the dance floor." That's a pretty assertive opening on the topic of appropriation for the first minute and a half of a broadcast network comedy.

For this show, though, these questions about culture are inseparable from Dre's sense that he's giving his kids more materially than he had, and what appears to be a questioning on his part of whether being privileged in terms of material wealth is taking away some part of their racial identity. His son goes by "Andy" instead of "Andre" and plays field hockey at his fancy school instead of basketball, and Dre feels in his bones that he's losing something that connects him to his kids. Whether you agree with it or not, that's a pretty provocative notion compared to "men like breasts and are gross, and women like purses and are nags!" and other common thesis statements for half-hour comedies. Some people are going to like the idea behind this show, and others won't — maybe a lot. But at least it has an idea.

At that same panel at press tour, producer Kenya Barris said, "The socioeconomic classes in our country now, to me, are more divisive than race or culture." He sees this show as one with a class component — how wealth affects Dre's self-concept — that's inseparable from its racial component. Unlike the Huxtables, who were clearly well-off but only acknowledged it very, very rarely, the Johnsons (who are starring in a much broader show) talk about it a lot, and talk about how it affects their kids.

It's hard to tell from pilots, because shows can easily go up or down in quality from there, and Wilmore leaving is definitely a hit to the show's team. And the pilot is uneven; it's stronger at the beginning than in the middle, which gets too broad to be as cutting as the opening minutes. But Anderson (who's also a producer) and Ross, as well as Barris, spoke extensively at that panel about the viewpoint of the show and its relationship to their own experiences. There are still people involved who are passionate about the show, and that, while no guarantee, is a good and important start.