Accessibility links
Making The Case 'Against Football' Steve Almond's new book is a powerful polemic laying out the reasons he, a longtime passionate football fan, is giving up the sport.

Making The Case 'Against Football'

Making The Case 'Against Football' 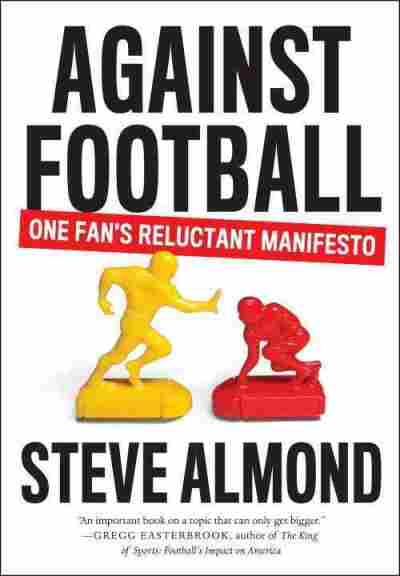 Steve Almond's blistering book Against Football: One Fan's Reluctant Manifesto is exactly what it advertises itself to be: an exasperated, frustrated, wide-ranging argument that the time has come to abandon football — particularly but not exclusively the NFL — as a sport built on violence, racism, economic exploitation of poor kids, corrupt dealmaking with local governments over stadiums, and a willingness to find it entertaining to watch people suffer brain damage.

The most important question with any book like this is whether it's being written to persuade or to fist-pump — whether the intended audience is current football fans or current football haters who have believed for years that football was stupid who are eager to have substantive claims of harm to mix in with their personal taste in what is classy and what is not. Particularly in the early going, Almond speaks to fans as a fan: he lays out his passionate attachment to the Oakland Raiders and the agony his fandom has wrought. But he also explains how important football was to his relationship with his dad, and how much he enjoyed camaraderie with fellow fans at a sports bar, and how he loved the sport enough to be transported just by reading about it.

But he eventually turns his attention to a variety of things he says ail the sport at the professional level: those stadium deals that benefit team owners, the kids who will do anything to pursue football in part because they sense limited options, the homophobic bullying culture he sees playing out in stories like the bizarre tale of Richie Incognito, and especially — especially -- evidence he cites that even ordinary, day-to-day football, played without anybody getting a concussion, can to permanent brain damage, profound suffering for current and former players, and shortened life spans.

There are times I felt like the critique became too sweeping: he offers some valuable critiques of The Blind Side (the book, not the film), but comes uncomfortably close (for me) to suggesting the family that adopted Michael Oher did so strictly to exploit him for the sake of Ole Miss football, an accusation that's been hurled at them a lot based on essentially circumstantial evidence. And, to my eye, he reads a tone of "triumph" in the book's presentation of their using correspondence courses to skirt the academic requirements of college where I read "whatever it takes, however imperfect, given this particular kid's circumstances."

Similarly, his criticism of Friday Night Lights seems built on the assumption that to present a way of life as being true for a group of characters is to endorse it as a desirable one — I'd counter that in a critical scene, Coach Eric Taylor once made it clear that pride is not worth kids being injured, no matter how much they may want to play on. And in fairness to the writers, what "injured" in football means has evolved even in the time since that show was on; his frustration that concussions weren't mentioned may be a little unfair to people who started writing a network show in 2006.

But also in fairness — to him this time — those things, both that book and that show, are things I like. This is the entire challenge of this little (under 200-page) book: you are challenging what people hold dear. If you question for a moment how personally people take their love of football, give a gander to his sampling of the hate mail he received when he started writing about his reservations about football (one of the few funny parts of the book), or check out the comments from when Here & Now talked to him last month when Against Football first came out.

While I'm certainly not a superfan of football, I will tell you that one of the first things I demanded when I got my new cable package was RedZone, the NFL cable channel that shows football all day every Sunday during the regular season, jumping from game to game without commercials. I consider it one of the few really great new ideas cable has had in a while, and I made sure I'd have it. I've been considerably cooler to the idea this year, both because of the injury issues Almond spends the most time on in this book and because of the issues the league has with both domestic violence and transparency.

One of the smart things about Almond's approach is that he doesn't claim that watching football is bad because it's lowbrow, or because it's dumb, or because it has no appeal. He's not throwing in with the people you may know who rail about the stupidity of sports as compared to high art, and he's not denying the understandable, genuine appeal of the game as a spectacle and a ritual. He's saying information has changed, our understanding of the consequences of watching as entertainment the likely shortening of people's healthy lives has evolved, and the business aspects of the NFL have taken on unsavory characteristics that may not be desirable for a variety of reasons.

I don't think the purpose of the book is entirely to persuade people to give up football, but I do think the purpose is to ask people to consider and process all of the pieces of this argument: When you consider the whole picture, is it something you want to watch and support? Even if it is, then if you've read the book, you've at least heard and processed a full-throated version of the case ... well, against it.

Read an excerpt of Against Football