Accessibility links
Book Review: 'The Clockwork Dagger,' By Beth Cato | Beth Cato's debut novel takes on the problems and limitations of the steampunk genre with an appealing heroine and a thoughtful meditation on what heroism really means. Plus, mechanical animals! 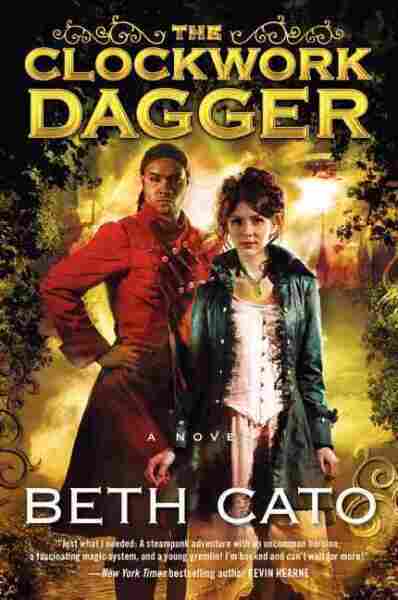 What makes a hero? Untold numbers of authors have tried to answer that question, all the while knowing that there can never be a simple solution to such a complex equation. Defining heroism is as slippery as defining humanity — as well as defining the culture that happens to be surrounding it any given moment. Which is why genre exercises like The Clockwork Dagger, the debut novel by Beth Cato, have their work cut out for them.

The book is as steampunk as they come: Dirigibles lumber overhead, wind-up mechanical marvels abound, and a pseudo-Victorian level of industrial technology is mixed with alchemy and magic. Cato's richly anachronistic setting only makes the definition of hero that much harder pin down. That she pulls it off so winningly is something of a marvel itself.

In The Clockwork Dagger, Octavia Leander is a 22-year-old medician — a doctor, in other words, although the similarity between the words "medician" and "magician" is not accidental — who embarks on a voyage aboard the airship Argus. Her mission has as much to do with her own soul-searching as it does with mercy. Orphaned at age 12 after a Hindenburg-like disaster killed everyone else in her village, she's the child of a world perpetually at war. Her country, an empire in decline, is exhausted from beating down a rebellion in a region known as the Waste; she isn't aboard the Argus long before she falls into the middle of that conflict. Attempts on lives are made. Skulking and skulduggery ensue. And an elite, semi-mythical wing of the Queen's guard — called The Clockwork Daggers — winds up being slightly less mythical than previously advertised.

Any fan of steampunk will tell you that the phrase "Clockwork Dagger" doesn't make any sense. In the genre, "clockwork" is used freely to describe the intricate, elaborate engineering that animates everything from mechanical animals to humanoid automatons (some of which also appear in The Clockwork Dagger, although they're kept to a tactful minimum). A dagger is, well, just a dagger — no moving parts, and hence very hard to apply "clockwork" to. Cato addresses this head-on, and it's the first hint that she's in the process of lovingly, subtly turning steampunk on its head.

For a book that's so solidly in the steampunk wheelhouse, The Clockwork Dagger is bracingly progressive. Sure, Octavia is spirited, self-possessed, and proto-feminist in a world that has yet to fully recognize the rights of women; that's not unusual. But Cato brings a broader range of viewpoints and backgrounds into steampunk, which is far too often a whitewashed genre. She also tackles the fundamental issue of otherness: Who do we consider our enemies, and why? And how can a hero function without being sure? Steampunk too often glosses over its glorification of colonialism and imperialism, and while The Clockwork Dagger isn't trying to reinvent the wheel in that regard, it consciously does better — not just because the genre needs it, but because it makes for a grander story.

Octavia doesn't set out to be a hero, and in a way, she doesn't become one, at least in the expected sense. She's a healer. Punching or pushing or shouting her way out of a fight isn't an option. Plus, her conflicts can't all be addressed that way: Even her chosen vocation, medician, is beset by an ideological struggle between those, like Octavia, who believe healing powers stem from faith, and those who are so taken by the new technology of airships and clockwork creatures that they see mysticism as backward superstition. In her struggle to reconcile these disparate forces — not to mention uncover the secrets of her fellow passengers aboard the Argus — she becomes a different kind of hero: One who thinks, cares, and nurtures as actively and powerfully as a member of The Clockwork Daggers can fight.

Cato juggles the issues with grace and ease. Her prose is bright and chiming, and her plot speeds by, brisk and uncluttered — but it isn't simple. She paints real-world concerns like war profiteering, biological warfare, and patriotic jingoism with allegorical resonance. Above all, though, Cato has crafted an effortlessly charismatic story. It occasionally dips into cliché, but she never lets it linger there long.

As a piece of genre fiction, The Clockwork Dagger works on two levels: It doesn't assume that the reader has any familiarity with steampunk, yet it hits all the high notes that steampunk fans crave. Then it pokes those tropes to just the right degree. It's an action tale that's as thought-provoking as it is rollicking — and a statement about how heroes don't always fit our definitions, nor should they.