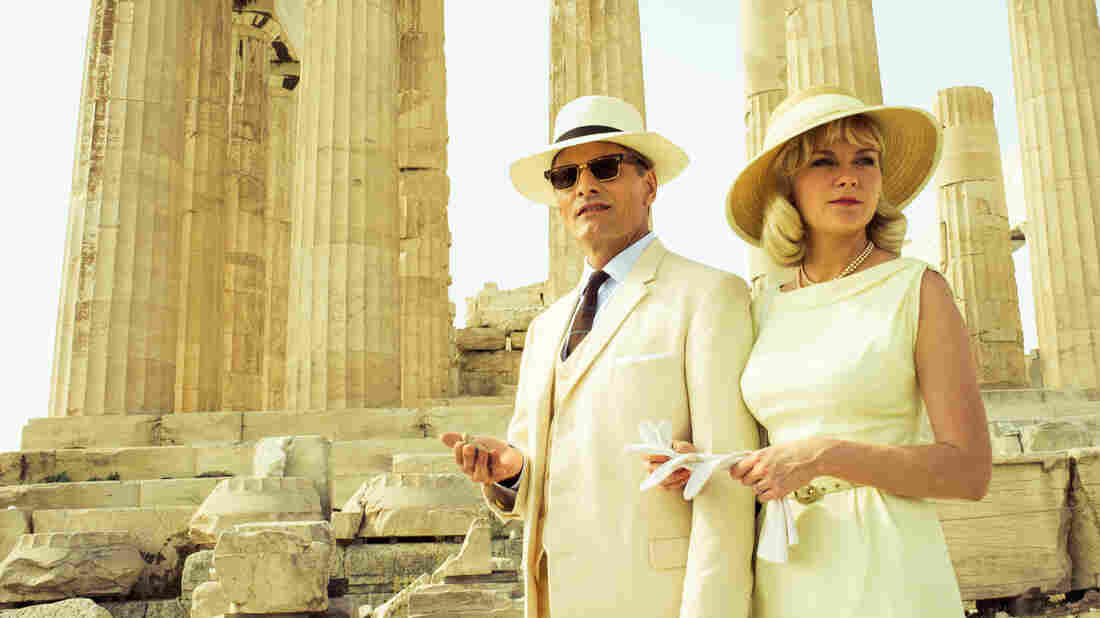 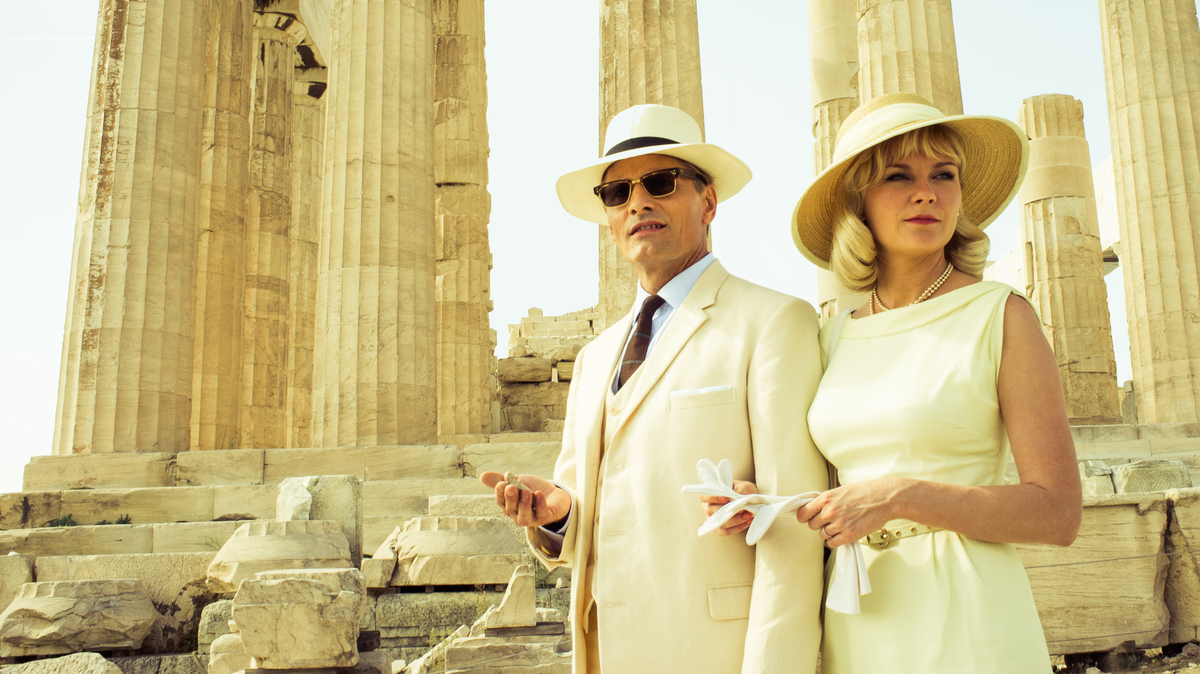 Viggo Mortensen and Kirsten Dunst star as Chester and Colette MacFarland in The Two Faces of January.

Adapted from a Patricia Highsmith novel, The Two Faces of January is, like Highsmith's The Talented Mr. Ripley, a tale of deceptive identities. When we meet Chester (Viggo Mortensen) and Colette (Kirsten Dunst) in 1960s Greece, they seem like a rich, elegant American couple casually touring Europe. It's not long, though, before Chester's previous life catches up with him. A private detective comes to his hotel room demanding payment on behalf of a group who were swindled by Chester when he lived in the U.S. After a brief tussle, the detective ends up dead on the bathroom floor.

By the time that happens, though, Chester and Colette have befriended Rydal (Oscar Isaac), whose back story, while less evidently misleading, is also mysterious. He's introduced as a more obvious cheat than Chester, running small scams on tourists while working as a tour guide. His demeanor, more than Chester's, suggests that he may not be what he claims to be. And ultimately, while Rydal, too, may be on the run from his past, his past may not be so sinister.

Rydal and Chester are flip sides of the reinvention narrative, embodied quite magnificently by Isaac and Mortensen. Isaac, still doughy-eyed but much less frazzled than in Inside Llewyn Davis, captures a self-assured center beneath Rydal's somewhat fidgety outer appearance. Chester, on the other hand, is pristinely put together but barely controlled just below the surface. Rydal, it seems, will find peace eventually, but Chester's torment only grows more frightening and dangerous.

The face-off between these two polarized characters — and two fine actors — offers up a fine flirtatious dance but never quite the promised payoff, although the two do share a few splendid interactions. One scene where the normally haughty Chester apologizes for a drunken episode and is brushed off by Rydal typifies these moments — they're made up of small gestures and looks that raise the tension in the men's power struggle.

Unfortunately, writer-director Hossein Amini's heavy-handed approach to interpreting the material bogs down the relationship. Chester and Rydal are clearly acting out something like a father-son dynamic, but Amini's insistence on having them say as much reduces their rapport to simplistic therapy. Similarly, a series of dramatic shots as Chester's behavior turns menacing are maddening for their excess: that Chester has inner demons is evident enough without lighting him as if he were the Phantom of the Opera.

Most of all, The Two Faces of January feels shot too tight and cut too tight; it doesn't push forward at a bewilderingly fast pace, but its story and its performances still feel like they need more room to breathe. The film's plot, after all, is fairly uneventful after the death of the private detective, punctuated by stops at a series of towns in Crete while Chester and Colette wait to receive the fake passports that Rydal arranged for so they can leave the country.

In such an open scenario, what's most interesting is how the trio's perceptions and feelings shift, yet Amini refuses to let scenes run on any longer than needed to get the story movement across; thus, rich subtext is left frustratingly unexplored.

Mortensen and Isaac are hindered by Amini's method, but ultimately it's Dunst who feels its effects most. The script sidelines her character as a plaything in Chester and Rydal's competition. And the camera, when it finds her, does so seemingly for the sole purpose of tracking a fixed emotional trajectory — she is intrigued by Rydal, then gloomy, then despondent. Dunst complies adequately enough with the limited requirements of the role, and that's ultimately how much of the film comes off: as a perfectly adequate take on a story that contains much more to be plumbed.