Accessibility links
Book Review: 'Doomsday Book,' By Connie Willis | This week, the CDC predicted there could be tens of thousands of Ebola cases if the disease is not controlled soon. Author Alaya Dawn Johnson turns to a favorite novel for wisdom amid this epidemic. 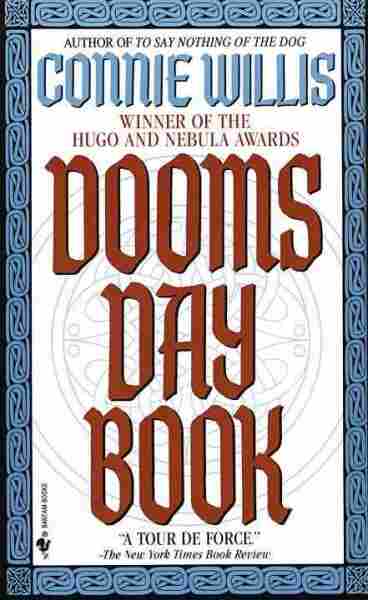 Many sobering statistics have emerged from the Ebola outbreak in West Africa, but one number in particular has stuck with me: More than 200 health care workers have died so far.

It is hard for me to conceive of the bravery required to take care of people with this awful, contagious disease. And yet, when I recalled Connie Willis' groundbreaking, Hugo Award-winning science-fiction novel Doomsday Book, the resonances came back to me with the sound of tolling bells.

Bells ring throughout Doomsday Book — they mark the hours in the small medieval village in which the time-traveling heroine Kivrin Engle has been stranded, awaiting rescue from her contemporaries in Oxford of the 2050s. They ring for holidays, they ring for weddings — and they ring for the dead, so that the sound might guide their souls to heaven. As the plague scythes through the English countryside that winter of 1348, the bells ring until it seems they might never stop.

Kivrin, who has been inoculated against the plague, helps the local priest, Father Roche, care for the dying in her adoptive town. Together, they battle their invisible enemy with only the crudest weapons, and, when those inevitably fail, faith.

"I'll be doing all right," Kivrin says, "and then suddenly the fear swamps me, and I have to take hold of the bed frame to keep from running out of the room, out of the house, out of the village, away from it!"

This kind of fear would paralyze most of us. But the remarkable, human bravery of Kivrin and Father Roche is that they don't run. They lance buboes and clean blood and fight and fight, even as the town dies around them.

Nearly alone, Kivrin's anger is incandescent. "It was God who should have to beg forgiveness," she says. And still, she doesn't run. Instead, in the end, she rings the bells, so that even the souls of the caretakers can find their way home.

Read an excerpt of Doomsday Book