Accessibility links
Book Review: 'Love Is The Drug,' By Alaya Dawn Johnson | Alaya Dawn Johnson's latest is about senior at a Washington, D.C. prep school in the midst of a global pandemic. This book offers a chilling glimpse of a dystopia that could be just around the corner. 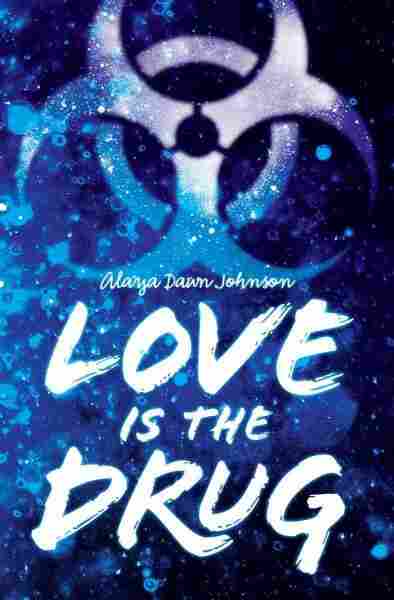 Love Is the Drug

Though some dystopias are bound to seem more plausible than others, the nature of these stories, especially those written for young adults — the heightened fable of the premise (with all the eye-rolling this can sometimes provoke) and the realistic teenage psyches being mapped on top of them — usually means that the books open in an established status quo. Complaints about these high-concept stories often, and with varying legitimacy, exist in the Hows. The overarching question: How do these new orders ever begin?

Love Is the Drug, the newest young adult novel from Alaya Dawn Johnson, is preoccupied with that very question; it's a world on the edge of dystopia, and it's all very real indeed. Our heroine is Bird, a high school senior at an elite Washington, D.C. prep school who's trying to navigate the social minefield just long enough to make a run for Stanford.

She's just enough aware of the local status quo to have an interior monologue that's a spinning-plates act: her mother thinks she's too black, her boyfriend thinks she's too ungrateful, her crush thinks she's too sheltered. She's also just rebel enough to test all those limits, knowing she must if she's going to find herself underneath them. When she wakes up after a party with no memory of what happened, those plates have all crashed. Her interior arc deals largely with the way she begins to rearrange the pieces, and how much she's willing to bleed for it.

The outward catalyst that speeds up this soul-searching: a deadly virus turned global pandemic. Amid cries of terrorism and threats from foreign governments, D.C. gets quarantined. It takes Bird's confined world from metaphorical to literal; it takes her government-scientist parents even further out of reach; and it means she has limited resources against the shadowy government agent (are there any other kind?) who wants to make sure she never remembers what she forgot at the party.

It's not a particularly tidy plot; despite the all-too-feasible disease vectors and the politically-savvy kids at Bird's school, there are a few false starts, several Macguffins to chase, and a sexy loner (nicknamed Coffee) whose knowledge of chemistry is vital to Bird's search, and whose sexy hair drives our heroine to distraction at regular intervals.

Then again, adolescence isn't particularly tidy. The novel carefully avoids superhero syndrome; against a global pandemic, there's not much these teenagers can do here, just knowing anything is dangerous enough. And that air of helpless claustrophobia perfectly backdrops Johnson's sharp observations about the stock market that is teen social hierarchy, giving the supporting characters depth and life, and lending Bird's extracurriculars — investigation and friendship alike — an air of espionage she desperately tries to break through. And the longer prep-schooler Bird stays with her uncle on the wrong side of town, the more the novel raises issues of class at a time when having the social protection of a private school can be a life-or-death affair.

Equal parts character study and thriller, Love Is the Drug offers a gripping study of identity, sly social commentary, and a chilling glimpse of a dystopia that's just around the corner.