Accessibility links
Book Review: 'How To Build A Girl' By Caitlin Moran Caitlin Moran's semi-autobiographical novel is an earnestly written look at a young woman's self-reinvention. How to Build a Girl tackles class, gender and sexuality with both humor and sincerity. 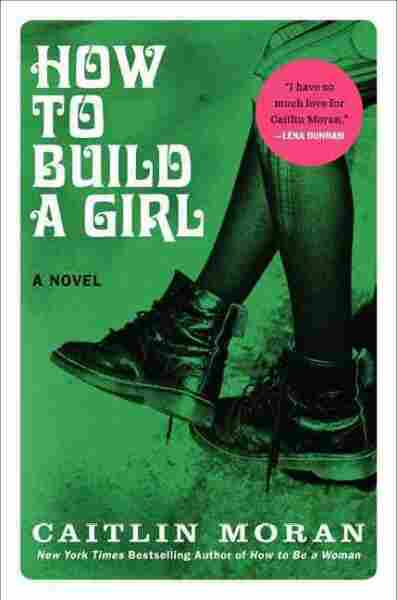 How to Build a Girl

Title
How to Build a Girl
Author
Caitlin Moran

Caitlin Moran's weekly column for The Times, has gained fans all across the U.K. With humor and a wry, self-deprecating wit, she writes on a wide range of topics that include government, technology, beauty and pop culture — all of which become, under her feisty gaze, feminist issues. "I rant about the welfare state, library closures and poverty," she explains on her website, "like a s - - - Dickens or Orwell, but with tits." And this irreverent summary, casually smutty, very funny, and barely disguising a serious intent, is the perfect introduction to her novel, How to Build a Girl.

The story opens in 1990 in Wolverhampton, a city in the English West Midlands. Johanna Morrigan is 14 years old and knows there has to be more to life than her small existence now offers. Her father is an unemployed would-be rock star, her mother is suffering from depression and young Johanna has more childcare duties (she has two brothers and there are twin babies to care for, too) and financial worries than a teenager should have to take on. She also has dreams of finding a way out.

Johanna's concerns are, in some ways, those of any teenager longing for popularity, love, fame and recognition of their hidden talents. But living in a working class family, in a deprived neighbourhood with few prospects, she's not quite sure how to go about fulfilling those dreams. Meanwhile, she tells us early on, "Today, like every other day, I'm going to go to bed still a fat virgin who writes her diary in a series of imaginary letters to sexy Gilbert Blythe from Anne of Green Gables."

Due to her family's economic hardship, Johanna decides that it is up to her to find a way to make some money. A very public humiliation that results from her initial efforts spurs her to reinvent herself, to become the person she is sure she was meant to be. "I want to be a self-made woman. I want to conjure myself out of every sparkling, fast-moving thing I can see," she declares, "I want to be the creator of me. I'm gonna begat myself." First, she'll change her name. This, then, is how to build a girl: find a cause; identify your image; let nothing stand in your way.

Moran is also the author of the bestselling memoir How to Be a Woman. This new book reads very much like Moran's own autobiography, exaggerated for effect. Dolly Wilde — as Johanna christens herself — lands a job as a freelance music journalist, travels to London, has lots of sex and drugs and rock 'n' roll. It's a fast-paced tale of a working class girl whose brains and way with words, and her sheer grit, ensure her escape and her success.

Moran never loses touch with what seemed to me an authentic and believably teenage voice — from the self-obsessed navel gazing nature of Dolly's reflections to the exaggerated emotional responses and flights of fancy. At times, the tone does become a little too breathless and over-excited. But, as any mother who has despaired of the sharp intake of breath and "OMG!" exhalation that accompanies the most banal of observations by an adolescent girl could tell you, this too is probably true to life. Moran manages to poke fun at her young alter ego just as she elicits the reader's sympathy.

The joy of this easy-read novel is not just the scrappy protagonist. As Dolly navigates her new life going to gigs and parties in London, and as we are reminded of the fate of her family back in Wolverhampton, Moran makes strong statements about social inequality and gender throughout. In one particularly moving — and uncharacteristically restrained — moment, Dolly tells the reader: "my biggest secret of all — the one I would rather die than tell, the one I wouldn't even put in my diary — is that I really, truly, in my heart, want to be beautiful. I want to be beautiful so much — because it will keep me safe, and keep me lucky, and it's too exhausting not to be." Even as she finds her way into womanhood, Dolly is beset by self-doubt and consumed by a negative body image. She may be living the feminist creed, but building yourself is never going to be an easy task.

How to Build a Girl is, in essence, a very British story about class and social privilege. American readers may have to work a little to get the sly social references and regional English. But it's well worth the effort. Dolly quits school at 16 — she's making enough money now and can't see any benefit to an education that seems designed to constrain rather than inspire — and the daily drama of her life with her parents, two brothers and the infant twins, trundles on. There are real moments of tenderness in her relationship with her brothers, Krissi and Lupin, and in the relentless optimism of her failed-musician father.

Dolly makes a name for herself writing destructive, acerbic reviews and by the end of the book (several reckless adventures, broken relationships and a wild tour of the music of the early '90s later), she is on the way to reinventing herself again as she moves to London permanently. This is — thank goodness — no tidy happily-ever-after. Instead Moran leaves the reader with the sense that once a girl takes responsibility for building herself there is always more to learn, the job is never done. She is a glorious work in progress.