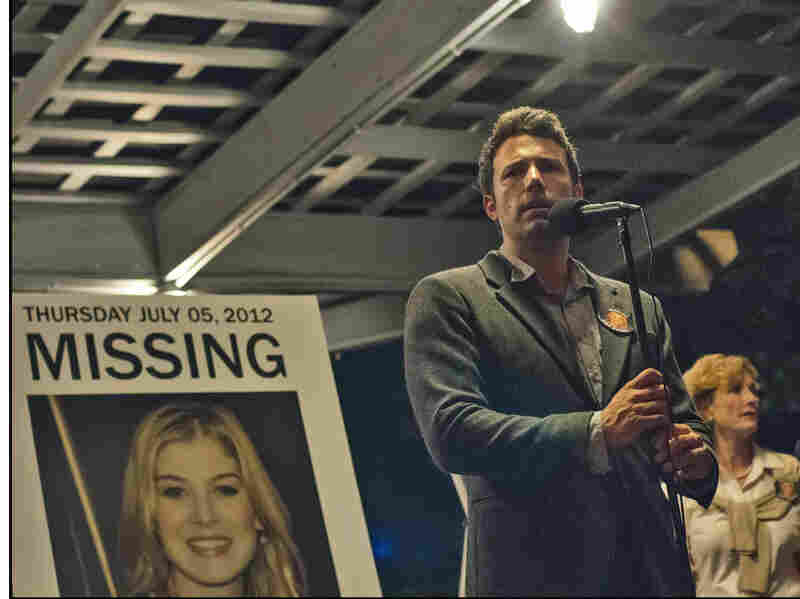 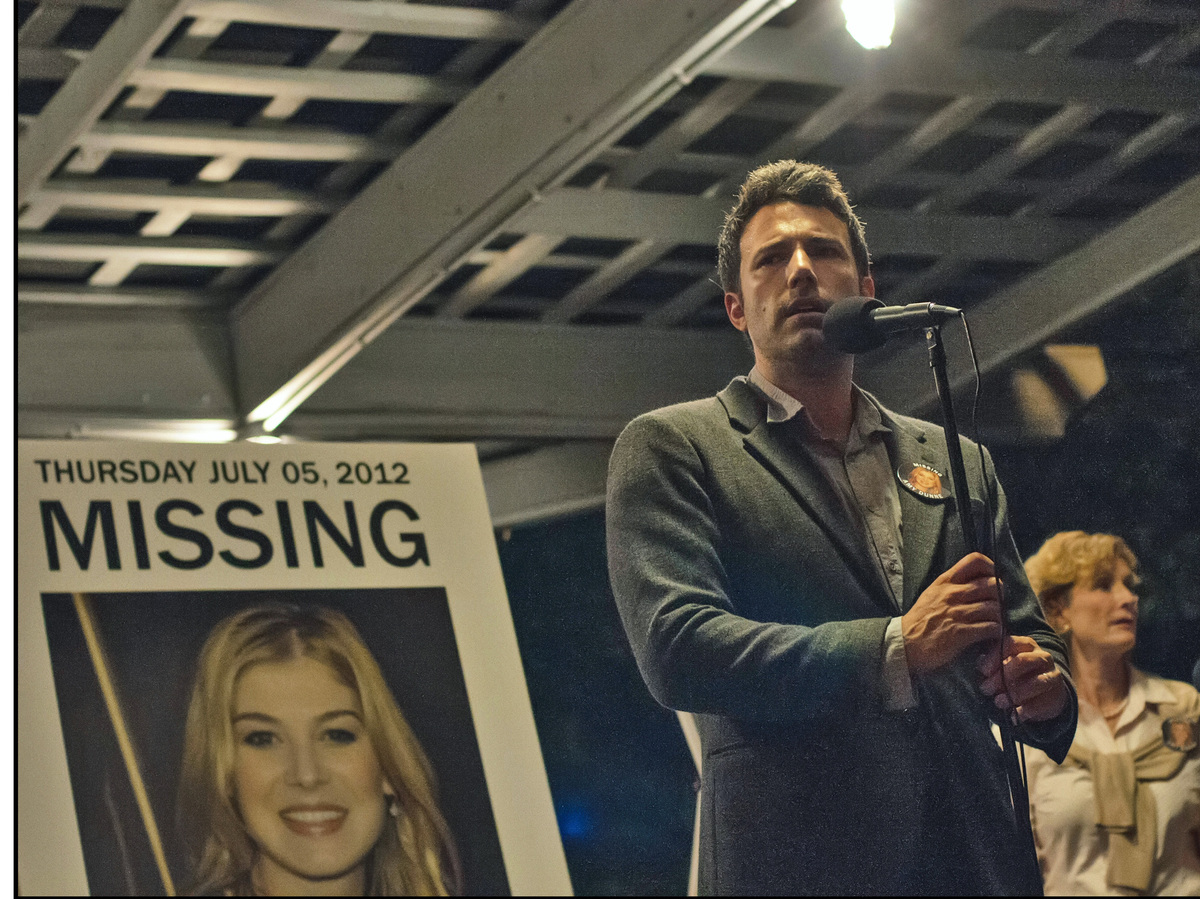 Nick Dunne (Ben Affleck) finds himself the chief suspect behind the shocking disappearance of his wife Amy (Rosamund Pike), on their fifth anniversary.

At the opening of Gone Girl, Nick Dunne (Ben Affleck) is literally a man on the street. Standing by his trash cans in the half-light of an early morning at his gorgeous Missouri home in a T-shirt and sweatpants, he is what might be mistaken for "comfortable," but he is painfully, powerfully ordinary. And in keeping with the title, he is about to learn that his wife, Amy (Rosamund Pike), is missing. Suspicious to both the authorities and the audience, Nick has lost his wife to either an act of violence he committed or an act of violence he did not commit. He is no longer ordinary; he is either a monster or a misunderstood victim of circumstance.

The story proceeds as a pair of alternating narratives: We follow Nick in the present as he describes to the investigating officers a challenging but basically good marriage, while Amy recounts in her diary, in parallel, a blissful courtship followed by increasingly dark flashes of trouble. We watch Nick tell the police and his sister things we know from peeking at Amy's diary are not true. It begins to dawn, in fits and starts, that the Nick we saw standing in the street was not the entire Nick.

It seemed almost impossible that director David Fincher and original novelist Gillian Flynn, who wrote the adapted screenplay herself, could hang on to the 2012 book's uncommon and disorienting structure, but they do. Seeing the film feels much like reading the book: They achieve the same gasps, the same moments of sudden and giddy understanding. They solve the problem inherent in every mystery: that it will be solved, but it cannot be until the final page, because once it is, the tension will slacken irreparably absent a series of false endings. In the film, as in the book, the opposite happens. Information is gained, sometimes in sudden gulps, but when it is, there is no deflation — only an exhilarating newness.

The story calls for such unrelenting work with mood, though, that there are times when it feels in danger of stalling to gaze at its own blue-gray color palette. Fincher loves his Trent Reznor/Atticus Ross scores, too, and while the dreamlike, woozy music in the first part of the film has just the right unnerving constancy, it seems at times to admit too little silence.

But if the production is slightly too atmospheric, the performances are bracingly specific, led by Affleck, whose task is complex. What drives any effective portrayal of Nick is that you must be able to believe that he could be a malevolent sort of pent-up guy, or he could be a middle-of-the-road lousy-husband guy, or he could be a truly put-upon and largely blameless guy. You must, no matter how hard you peer at him, find it hard to tell. You must be unable to choose an answer even after you know the answer. He has to have an almost existentially untrustworthy quality, so much so that you don't even trust any instinct you may have that he's not to be trusted. He has to be, to Amy, both charismatic and disappointing, and he has to be, to us, maybe innocent and maybe guilty but naggingly unseemly either way. It is the greasy sheen on Nick's personality, combined with something sympathetic in his insistence that he's innocent, that makes the movie run.

And that is where Ben Affleck's sweet spot is. Like Hugh Grant, he flounders dully when people try to get him to play anybody too unambiguously nice; he leans on his grin and his ingratiating shrug, and he gives off a generous whiff of distasteful entitlement. But allowed a bit of early-middle-age moping and resentment that's built into the character, allowed to play a more questionable person, he's more human. His work here is taut and controlled, and he beautifully translates details from the book like Nick's tendency to smile at cameras even while surrounded by the theater of tragedy — a tendency that's either an unfortunate disadvantage that makes him seem guilty or a crucial tell that he is guilty. (Seeing this kind of detail on screen — the kind that's tough to understand until you see a living person do it — goes a long way to justify the film adaptation's existence.)

Rosamund Pike's performance is much harder to talk about, because she's the co-lead of the film despite the fact that Amy is gone. It is Amy who must come into focus gradually, and it is Amy whose disappearance must eventually be solved, and whose story will have to be closed from there. It is adequate to say that playing Amy in the dual narratives that she and Nick offer is an enormous challenge. It's not quite the pop-culture staple of Rashomon, but reconciling Amy from Nick's telling and Amy from the diary — and the two Nicks with whom those Amys live — becomes key to understanding what happened to Amy and whether she will or will not ever be found.

I think it is not spoiling too much to say that there are really two movies curled around each other in Gone Girl: one part built on the tropes of mystery and one part drawn from the traditions of suspense and horror. There is more subtlety in the first, more focus on the fine points of how marriages bend lovingly and warp dangerously. The second story is more an unsheathed weapon, wielded extravagantly, in which whatever is wrong, whatever made Amy be gone, must be confronted, whether it's internal or external to her husband. Fincher's handling of both is appropriately creepy and nicely paced — the movie is 2 1/2 hours long and never drags.

While this is largely a two-person dance (of people spending much of their time apart), supporting performers, including the fabulous Carrie Coon as Nick's fretting twin sister and a surprisingly relaxed turn from Tyler Perry as Nick's attorney, put in good work. Neil Patrick Harris as a former boyfriend of Amy's makes for an offbeat piece of casting given the other roles he's played, and while it's an almost impenetrable performance, it seems intentionally so.

But ultimately, Gone Girl runs on the diabolical, inventive, sometimes unhinged genius of its story. It is constantly pressing on the edges of tropes until they show weakness — the tough detective, the dirty lawyer, the sweet wife and worried husband — and then cramming sticks of dynamite into the cracks and lighting them for kicks. Fincher being Fincher, it's a fine-looking, carefully crafted, meticulous piece of filmmaking full of shots that beg to be admired until they are almost but not quite ostentatious, including the very first one of the film, in which the back of Amy's head is obliquely referenced as a thing to be cradled, struck and ultimately dismantled — the better to understand it, of course.

It is fine filmmaking. It is fine acting. But this is, in the end, a story-driven movie, and what makes it work is that Flynn and Fincher together have told the ever-loving heck out of this scary, weird tale, with respect for the pitch-black (really, really pitch-black) humor that occasionally oozes from its pores. They are acting here as social commentators on the topics of gender and marriage and media (it's just hard to explore that without giving too much away), but they're also acting as campfire legend-spinners. This one time, there was this man, and he called the police and said that his wife was missing.