'Lies' May Be Fiction, But Its Story Rings True

'Lies' May Be Fiction, But Its Story Rings True 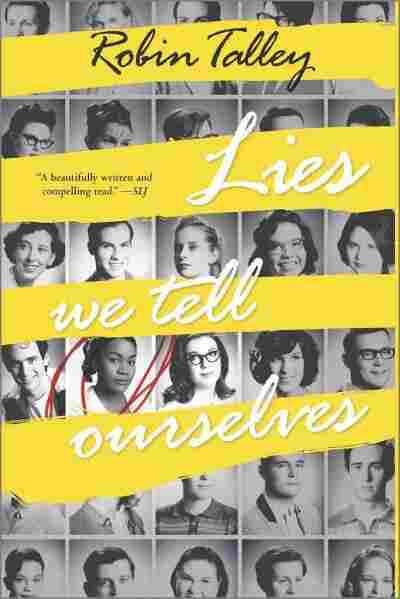 Lies We Tell Ourselves

Editor's Note: This book review includes a passage in which a racial slur is used. The word is key to understanding the point the author is making.

In the spring of 1968, my aunt Elizabeth Rice was about to start her first term as a teacher at Virginia's Petersburg High School. "I remember driving there in my red Volkswagen," she told me when I called to ask about it. "And Richard was with me, and when we got close to the school he said, 'Well, Betty, looks like you've got a welcoming committee,' and I said, 'What?' But then we turned the corner and I saw them."

What my Aunt Betty and Uncle Richard saw that day was a sea of white people blocking the front steps and entrance of the school. Betty Rice would be the first black teacher at Petersburg, and one of many black teachers finally integrating the faculties of Southern high schools. That morning, there was no name calling, no spitting, no rocks. The white people were absolutely silent. "You could have heard a pin drop." She got out of that car, faced that mass of hatred and fear and palpable menace, and she walked through. "I'll never forget," she told me, "the day I parted the white sea."

Robin Talley's debut, Lies We Tell Ourselves, begins in 1959 with black students approaching the same menace my aunt faced down all those decades ago: "The white people are waiting for us," reads that indelible first line. Ten teenagers are about to enter the lion's den, to serve as soldiers on the front lines of a war in which they could lose their lives. Davisburg, Va., and Jefferson High School are Talley's fictional creations, but the dangers faced by Sarah Dunbar, her sister Ruth and the other eight black students selected to integrate the formerly all-white school are raw and real. Theirs is a story that deserves to be remembered, and I found myself at turns grateful and horrified as I read Talley's fictionalized account of integration.

"I've never been called a nigger in my life," Sarah says. "Not until today." It was hard to read that word, so deliberately placed, over and over in the text. Hard, but, I came to understand, necessary. Avoiding its use would be a soft-focus camera lens fuzzing out a very cold fact of these students' experience.

That experience, that suffering, is often dismissed by the adults in their lives — the adults are focused, perhaps out of necessity, on the goals of "the movement" and the good that these kids will do in the long term. But, as Sarah says, "It's hard to think about the good of the movement when you can't hear yourself think for the shouting." The kids who integrated these schools were undeniably heroes, but heroism at such a young age — an age where you have even fewer emotional resources to withstand such a barrage of hate — raises hard questions that I was glad the text addressed.

Sarah's viewpoint alternates with that of Linda Hairston, the daughter of Davisburg's most ardent segregationist. While I felt an initial distrust for a narrative that would balance the journey of a black girl literally struggling for her life with that of a white girl realizing that racism is wrong, Linda eventually won me over. It works in large part because Talley uses these alternating points of view to generate an absolutely thrilling, head-over-heels love story that owes a great deal to traditional romance novel modes of storytelling (while blowing a big raspberry at their whiteness and heteronormativity).

The two of them come together when forced to work on a school project, and very quickly the sparks caused by their different worldviews give way to sparkling sexual tension. Sarah has always recognized her attraction to women, though religious and social norms have made her desperate to repress and atone for "sinful" thoughts. Linda has a fiance, but she doesn't love him so much as the escape he represents from an emotionally (and occasionally physically) abusive home life.

As Linda comes to reject the violent racism of her father and her classmates, she also falls in love with Sarah. It's the perfect recipe for an "I-hate-you-no-I-love-you" romance, and the moment when they finally give in to the pressure and kiss is as delightful as any young adult novel I've read in a long time. I loved that the narrative celebrated lesbian romance in an era in which it was rarely discussed — and did it in a genre that by and large continues that erasure.

A few omissions in the text stand out — particularly the way a novel that discusses "the movement" in broad terms could fail to mention Martin Luther King or other black leaders, or situate its personal struggle in that broader context. I also wished we could have seen more of Sarah's social world apart from her involvement in the movement. Sarah's life in the novel is dominated by a white world, and almost none of Linda's takes place in a black one.

Like Talley, I'm a generation removed from the civil rights movement, and yet I know far too little of my own history. My Aunt Betty told me about the day she got to class only to find that one of her students had written KKK will lynch you on the blackboard. I had never heard that story before.

Lies We Tell Ourselves might be fiction, but the story is true — and it's one we should never forget.