A Poetic Look At A Medical Pioneer, 'Dr. Mütter's Marvels' Jolts The Heart

A Poetic Look At A Medical Pioneer, 'Dr. Mütter's Marvels' Jolts The Heart 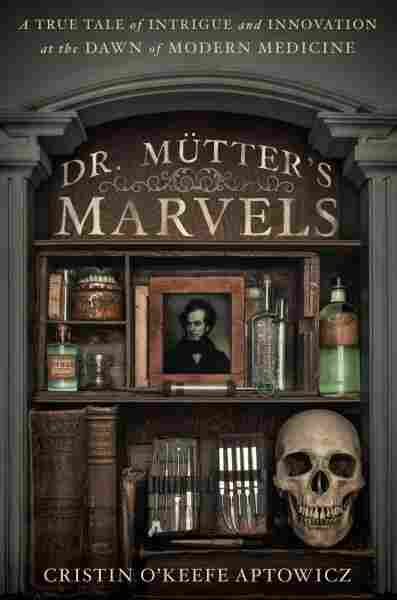 In 1859, Philadelphia surgeon Richard J. Levis published a piece in The Medical and Surgical Reporter titled "Memoir of Thomas Dent Mütter." It was a eulogy for his former teacher, a surgical pioneer who had died earlier that year at the tender age of 47. Mütter is also the subject of Cristin O'Keefe Aptowicz's new book, Dr. Mütter's Marvels; in it, Aptowicz forgives the simplicity of Levis' tribute to Mütter by noting, "[Levis] was not a poet, just a surgeon." Aptowicz, on the other hand, is a poet. She's had numerous books of her verse published, and she's a notable figure in the American slam-poetry scene. That wouldn't seem to qualify her for writing a Mütter biography — but her poetic eye is exactly what makes Dr. Mütter's Marvels a marvel itself.

Mütter grew up in an age when death hovered perpetually overheard, a grim fact he was intimate with. By the time he was 7, his mother, father, brother and grandmother had all died of disease, and he himself was chronically ill as a boy. Having to witness so many of the primitive, ineffectual medical treatments that were commonplace at the time, up to and including being bled, he gravitated toward medicine as a student. But he was not one for sticking to the textbook. His career became a spiral — sometimes upward, sometimes downward — of innovation, iconoclasm and a dandified showmanship that would have made him a celebrity in our time.

Back then, though, his flamboyant advocacy of hygiene, anesthesia and the most radical of all techniques — compassion — wound up gaining him as many enemies as admirers. In the end, he enjoyed a certain amount of triumph, but it was trumped by his untimely death from the illness that had plagued him his entire life, not to mention the fact that historians relegated him to a footnote.

With clinical precision, Aptowicz lays bare the facts of Mütter's colorful, tumultuous life. But those are only the bones of the book. Through anecdotes, rich context and an unabashed artistic license on par with Erik Larson's novelized historical accounts like The Devil in the White City and Thunderstruck, she injects Dr. Mütter's Marvels with warmth and wit. In particular, the doctor's borderline fetishization of grotesque medical curios — which would come to rest in Philadelphia's Mütter Museum, still standing and attracting tens of thousands of visitors annually — comes across as both a quirk and a virtue, the result of his fascination with how the human body can be not only healed, but re-sculpted. His work in plastic surgery underscores a larger point that Aptowicz reveals masterfully: Vanity and wanting to be accepted in society are two very different things, then and now.

Most of all, the book portrays Mütter — a remarkably handsome man — as a victim of his own vanities and ambitions. Not that Mütter saw it that way: Ambition "is like the sun; it gives life and heat to all around," he says at one point. That intrinsically American way of looking at personal aspiration made Mütter, a man who added umlauts to his own name as a way to distinguish himself, as much of an inveterate self-brander as he was a true mover and shaker. Although Aptowicz glosses over none of his faults, she carefully, poignantly constructs an image of Mütter as a man of empathy at a time when surgeons had all the bedside manner of butchers: "The physician should also be a gentleman" was one of his personal tenets. Like the best biographical works, Dr. Mütter's Marvels shows its subject to be an anomaly as well as a product of his time.

Aptowicz first began writing about Mütter over a decade ago, when she penned an award-winning screenplay for a feature film about his life that remains unproduced. Like Mütter, Aptowicz has her obsessions, and that fixation on one of America's unsung medical heroes has served her — and Dr. Mütter's Marvels — well. For a book so immersed in the intimate perspective of its subject, it also brings a broad perspective about everything from the development of modern medicine to women's issues of the 19th century, not to mention how norms of beauty and the definitions of monstrosity have inspired and held us back over the centuries. With Dr. Mütter's Marvels, Aptowicz keeps a steady hand on her historical scalpel, even as she wields it with a winning flourish.