Accessibility links
NPR Poll: Senate Battleground Tilts Republican, But Still Anybody's Game A new NPR poll concentrates on the Senate battleground — the 12 states that will determine control of the Senate next year. It found an electorate where nobody likes anybody. 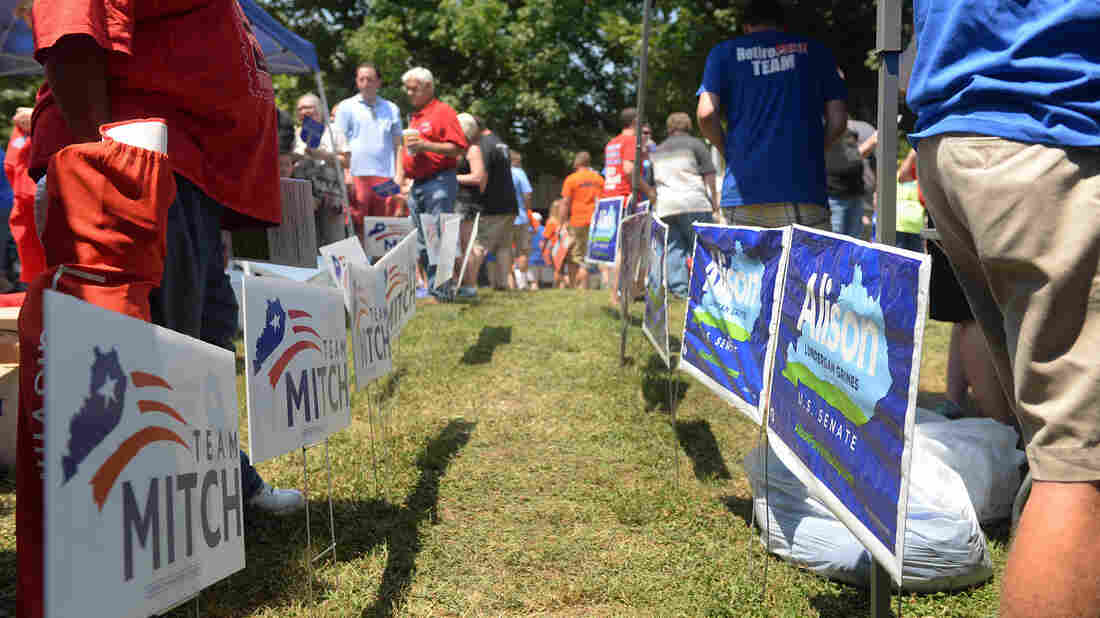 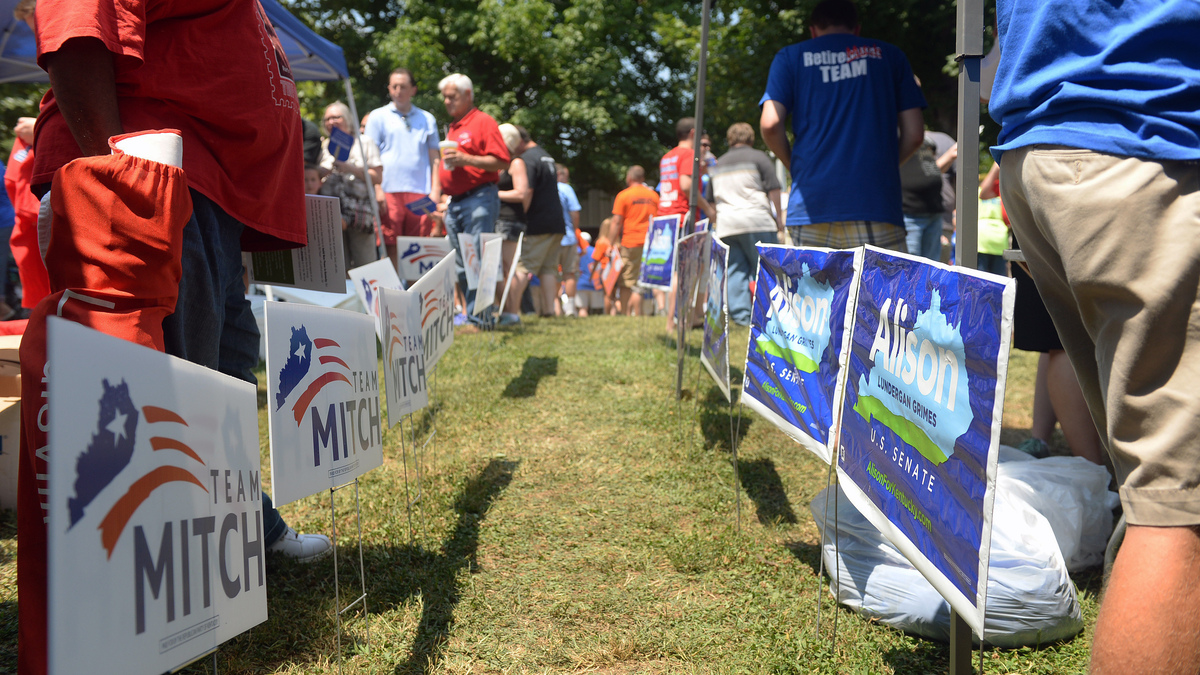 With fewer than five weeks until election day, the political landscape continues to be tilted against President Obama and his party. The battle for control of the Senate — the biggest prize this year — remains close and could tip either way. 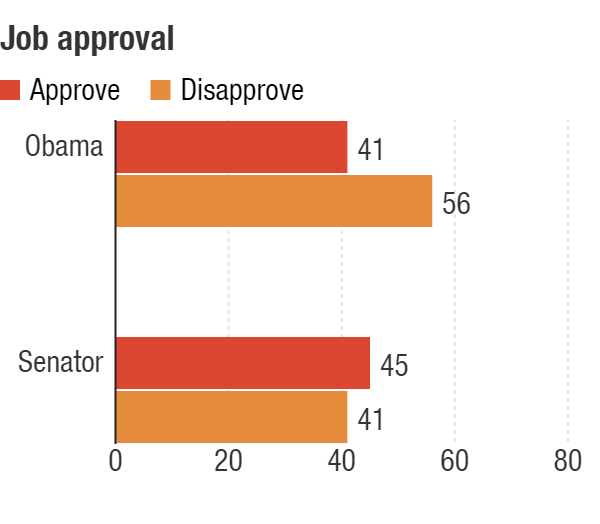 Those are the findings of NPR's latest bipartisan poll of likely voters, conducted by Republican Whit Ayres of Resurgent Republic and Democrat Stan Greenberg of Democracy Corps.

The poll concentrated on the Senate battleground — the 12 states that will determine control of the Senate next year. It found an electorate where nobody likes anybody. The president, the Republicans and the Democrats were viewed with equal disgust — their favorability ratings all in the low 40s. This is a disgruntled group of voters, says Ayres, which this year happens to be good news for his party.

"The direction of the country is overwhelmingly perceived to be in the wrong direction. Barack Obama is exceedingly unpopular in the Senate battlegrounds," he says. "The generic party preference for a Senate candidate favors the Republicans by three points. So the playing field still tilts strongly to Republicans in these 12 battleground states."

Democrat Greenberg doesn't try to sugarcoat the outlook for his party. But he points out that although not that much has changed since we last polled the Senate battleground in June, the president is a little more popular today, mostly because the public supports his military action against ISIS.

Likely voters were asked, "What are the most important issues when deciding whom to vote for in the election for U.S. Senate?" NPR/Democracy Corps/Resurgent Republic poll hide caption

"The mood is bleak, the president's not popular," Greenberg says, "but it's not entirely stable. That is, we're looking at a president that is slightly improved. ... The Democratic candidates, incumbents, are a net positive in their own personal favorability and their job approval. And so they're clearly withstanding the trend that we're talking about."

There's another phenomenon this year that shows up in the poll. In the battleground, Democrats and Republicans are equally energized, highly likely to vote, and they are not up for grabs. Big majorities of both parties say their minds are made up.

"But these elections are still within a point or two, and so despite this consolidation, the campaigns matter and can still impact both on preference and on turnout," Greenberg says.

Ayres says he agrees. "Democrats are locked in, the Republicans are locked in, and that's why it's so important the independents prefer a generic Republican by 53 percent to 37 percent — 16-point preference," he says.

Rebecca Janes from Arkansas describes herself as an independent and a home-schooler mom. She plans to vote for Republican Rep. Tom Cotton for Senate. She says she wants to send a message to Obama. "I will try to check and balance our current administration at every point I am able to with my vote," she says.

Janes says Obamacare is her most important issue, and across party lines Obamacare is still among the top three issues for voters this year. Jobs and the economy are No. 1, of course.

But the poll also shows that Democrats have been successful at driving an agenda aimed at their top targets — female voters. Democrats in our poll rank a candidate's position on women and women's issues just behind the economy.

Gwen Clements, a registered Democrat and out-of-work dental assistant from Kentucky, plans to vote for Alison Lundergan Grimes for Senate. Or rather, she plans to vote against the incumbent Republican Mitch McConnell.

"For one, I'm a woman," she says. "And he has voted against everything for women — the fair pay, the violence."

Republicans need to pick up six Senate seats to win control, and the NPR poll shows the 12 battleground Senate races continue to tilt to the right. But there's no sign yet that a big electoral tsunami is coming, the way it did to help Democrats in 2006 or Republicans in 2010.

"The definition of a wave is when one party wins many seats by one or two percentage points, where every close race goes their way," Ayres says. "The overall environment is very promising for Republicans now, but there's not yet evidence of a wave comparable to 2006 or 2010. But one could easily develop. It's like on a hot, muggy summer day, you know the environment is right for thunderstorms even if none are yet visible on radar, but you'd better keep an eye out for them."

Greenberg says in election after election, "we've watched ... Republicans expecting to win control at the Senate, and it's broken at the end for the Democrats, winning almost all the competitive Senate races. That could happen here too. Republican party is very unpopular, president's not very popular, I recognize. Both are at work, but it could tilt one way or the other."

And that's the suspense of this election. History and the number of red states voting tells us that the GOP should win the Senate. But Republicans have fallen short of expectations in the past two cycles. This year, things look very good for a Republican Senate takeover, but the battleground races are still too close to call to make that guarantee.

Note on Methodology: This survey was conducted from September 20-24, 2014 using a list of 2006 voters, 2010 voters, and new registrants. The survey is of 1,000 likely 2014 voters in the most competitive Senate races across the country, conducted by Greenberg Quinlan Rosner Research for Democracy Corps, Resurgent Republic, and NPR. Unless otherwise noted, the margin of error for the full sample is = +/- 3.10% at 95% confidence.