Accessibility links
As Populations Shift, Democrats Hope To Paint The Sun Belt Blue Democrats see an opportunity in the South's changing demographics — particularly in states with growing Hispanic communities, lots of unregistered black voters and migration from other states. 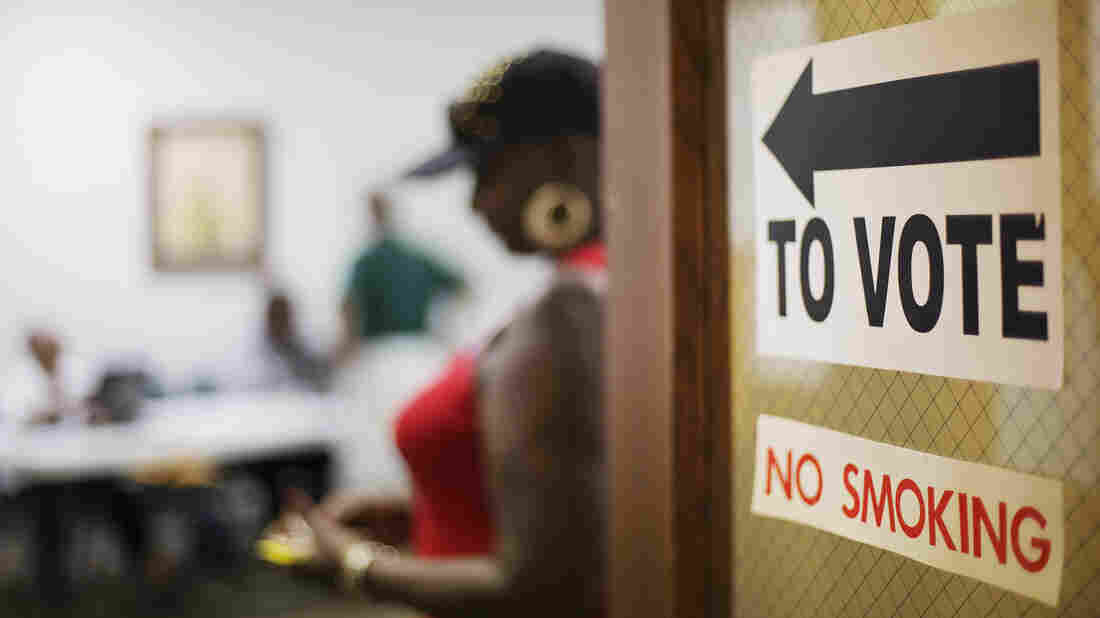 A sign directs voters at a polling site in Atlanta. "Georgia is changing dramatically," Democratic gubernatorial candidate Jason Carter says. "There's no doubt that Georgia is next in line as a national battleground state." David Goldman/AP hide caption 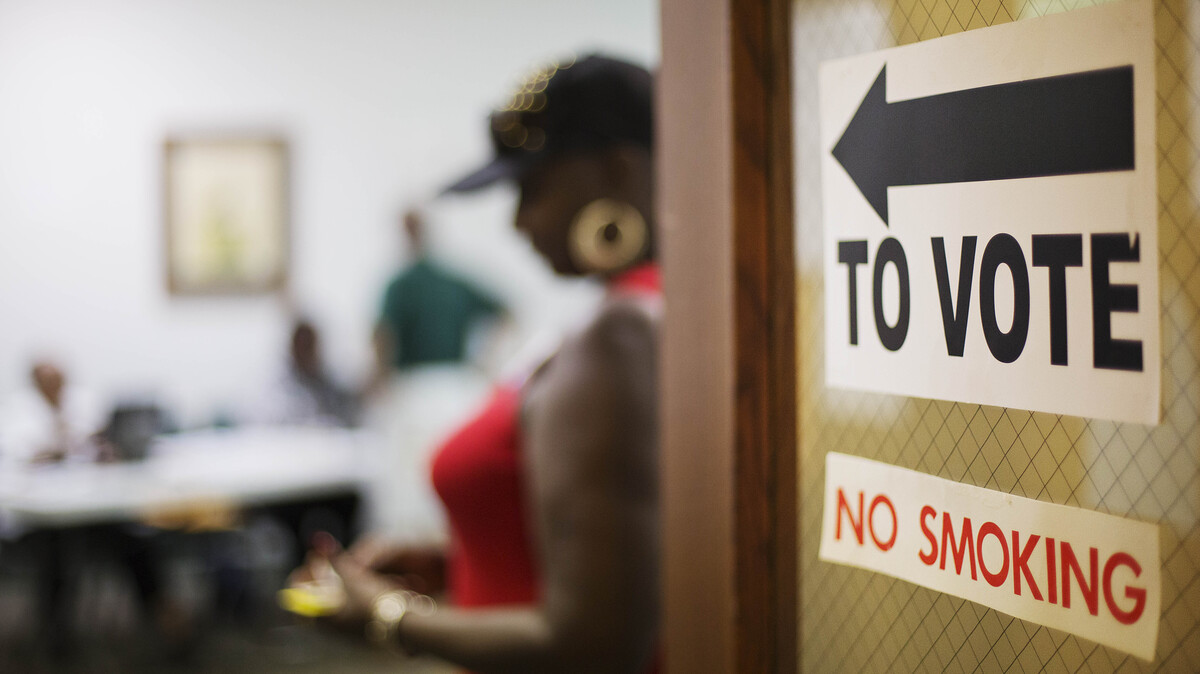 A sign directs voters at a polling site in Atlanta. "Georgia is changing dramatically," Democratic gubernatorial candidate Jason Carter says. "There's no doubt that Georgia is next in line as a national battleground state."

The Democratic National Committee is running a Spanish language ad on radio stations in North Carolina and Georgia, where there are competitive U.S. Senate races.

"Republicans think we're going to stay home," the ad says. "It's time to rise up."

Democrats see opportunity in Southern states with fast-growing minority populations and an influx of people relocating to the Sun Belt. In Georgia, there's a push to register new voters in hopes of turning a red state blue.

Anastasia Fort says she needs to check because she just moved to a new neighborhood. Nix tells her how to make sure she's on the voter rolls.

"Because things are tight," Nix says, "we feel like it's even more important that people are not only registered but are actively engaged in what's going on."

Fort admits she's not so engaged. Her friend Steve Stuglin is shocked.

"You're not following? I mean Michelle Nunn's got a chance," he says.

Michelle Nunn is the Democrat in a tight race with Republican David Perdue for an open U.S. Senate seat. Stuglin moved here from Detroit six years ago, bringing his Democratic politics with him. He says Democrats could make gains in Georgia if their voters would just turn out.

"They think it's a lost cause, it's never gonna happen, it's a red state, just deal with it," Stuglin says.

But Democratic operatives say Georgia's days as a reliably red state are nearing an end, in part driven by demographics.

"There are 800,000 unregistered African-American, Latino and Asian voters in the state of Georgia," Abrams says.

Asian Americans are the fastest growing minority in the South, with Latinos close behind. Both groups have settled in Atlanta's bustling suburbs.

The New Georgia Project has been canvassing door to door and conducting drives to sign up voters. Abrams says they've registered 87,000.

Georgia doesn't register by party, but the group has targeted populations that tend to vote Democratic.

The question is, will they?

Emory University political scientist Andra Gillespie says Republicans still have the edge in Georgia. She doesn't expect this Democratic new-voter push to bear fruit this cycle, even though the registration numbers are impressive.

He says what's happening here can alter the political landscape.

"Georgia is changing dramatically," Carter says. "There's no doubt that Georgia is next in line as a national battleground state." 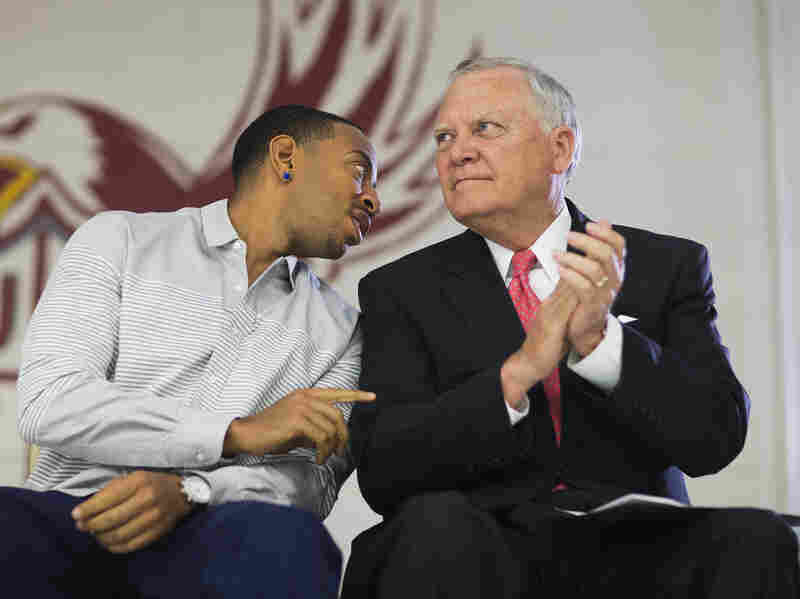 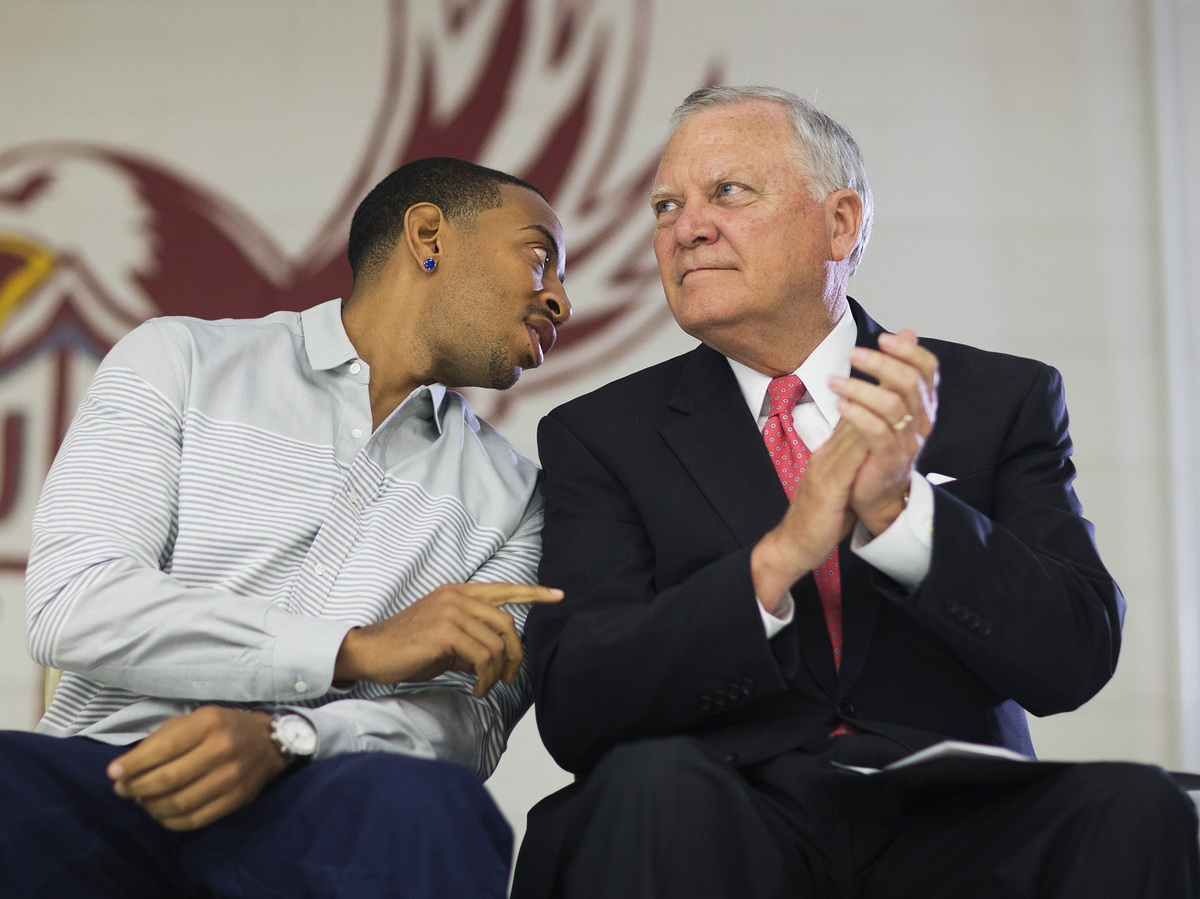 Republicans are taking note of the change. Gov. Deal also campaigned at an African-American church in Macon on Sunday, and appeared at a school last week with the rapper Ludacris.

"That is our battle," Robinson says. "Changing the way people identify themselves by party over the next 20 to 30 years."

On the front line of that battle is Leo Smith, minority-engagement director for the state GOP. For the past year, he's been touting Republican values.

"These are ideas of liberty and freedom that Grandmama and them used to talk about," he says. "God bless the child that's got his own. Keep the man outta your house. Man don't work, man don't eat. All those were sort of black value systems that I grew up with that sound really Republican."

Smith acknowledges his work is cut out as he sits in the state GOP office surrounded with portraits of the top Republican office holders in Georgia — all white men.