Accessibility links
Lena Dunham Really Isn't 'That Kind Of Girl' Dunham presents a charming, bumbling, confessional front in her new memoir, but critic Annalisa Quinn says it's only a partial portrait that skimps on revealing Dunham's true talent and ambition. 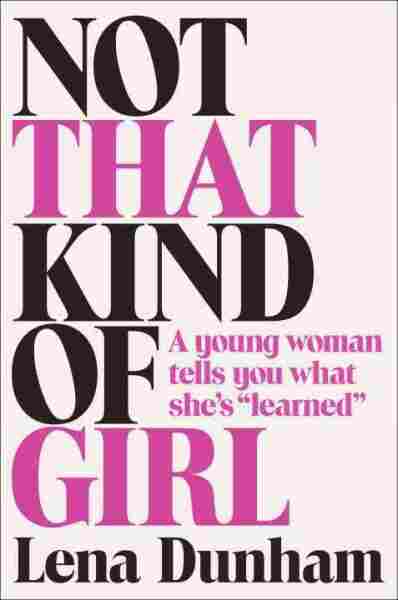 Not That Kind of Girl

A Young Woman Tells You What She's Learned

What kind of girl is Lena Dunham? Is she Hannah Horvath, narcissistic Girls character? Is she Your Friend Lena, the charming, bumbling author of her new book, Not That Kind of Girl? Is she a celebrity? An artist? A media mogul?

Her memoir persona — Your Friend Lena — is unassuming. Your Friend Lena is witty. Your Friend Lena is charming. Your Friend Lena carries five different types of pills in her purse and is afraid of lamp dust. Indeed, YFL is so nonthreatening that, if it weren't for occasional references to her "work," a reader might be forgiven for thinking that YFL spends most of her time bopping around in patterned jumpsuits, eating vegan cheese and having bad sex. This is a comforting image: the hugely successful Lena Dunham is just like us — overfed, undersexed, not appropriately dressed for the occasion.

But Lena Dunham is not like us. We do not have her HBO show or her book deal because we don't have her work ethic or her unique mix of wit and vulnerability, of candor and charm. One does not just stumble, berompered and pudgy, into a career writing, directing, and starring in one's own TV show. No doubt she is lucky, but no one is that lucky.

Dunham is often called brave for baring her body on TV, but perhaps the truly daring thing would be to acknowledge the wild heights of both her talent and her ambition. This isn't a criticism: only Dunham knows the ways that she would be shamed and punished for a book that really examined her success and its effects on her life. It's one of many taxes on fame: you lose the ability to talk in any way that isn't winning and self-deprecating. (Other taxes on success: privacy, autonomy.)

It isn't that the book's picture of Dunham is dishonest: it's just partial. And she acknowledges this: "There is so much I've shared," she writes, explaining her choice not to write (much) about her boyfriend, "and so much that's been crushed by the sharing."

But the explicit aim of Not That Kind of Girl is social utility, not truth: Dunham wants to make us – mostly women, mostly young — feel better and less alone. "[I]f I could take what I've learned and make one menial job easier for you, or prevent you from having the kind of sex where you feel you must keep your sneakers on in case you want to run away during the act, then every misstep of mine was worthwhile." And she never pretends to be a reliable narrator, cautioning us that her sister "claims every memory we 'share' has been fabricated by me to impress a crowd."

She meets her aims: we are comforted, we are charmed, we leave more empowered than we came.

Lena Dunham On Sex, Oversharing And Writing About Lost 'Girls'

There are moments when she departs from YFL-territory, and these are some of the book's most interesting. In one passage, she analyzes the way she's always called "brave" for getting naked on TV ("The subtext there is definitely how am I brave enough to reveal my imperfect body, since I doubt Blake Lively would be subject to the same line of inquiry.") In another, she imagines being 80 and finally able to "name names" — that is, the names of older men who treated her like a "cute little director-shaped thing" instead of taking her seriously. "And I won't give a shit about doing battle with someone's estate because I'll be eighty and, quite possibly, the owner of seventeen swans."

Another of the book's wonderful aspects is the way Dunham establishes herself within a tradition. She's sometimes accused of egotism (as far as I can tell, because she plays an egotist on TV), but here she acknowledges her literary heritage again and again, saying explicitly and implicitly that without a Nora, a Judy, a Gloria, and a Helen, there could be no Lena. She reminds us that we — the maladjusted girl children of the 80s and 90s — have a canon, too.

And Lena Dunham is the passionate, talented, hardworking — and, yes, ambitious — inheritress of that canon. She can pretend to be winningly hapless all she wants, but we know that she's a force to be reckoned with. We don't get the real Lena, sure. But what have we done to deserve her?