Accessibility links
Did The Supreme Court Just Legalize Gay Marriage? As thousands more same-sex couples marry all over the country, this legal climate change becomes a kind of fait accompli. 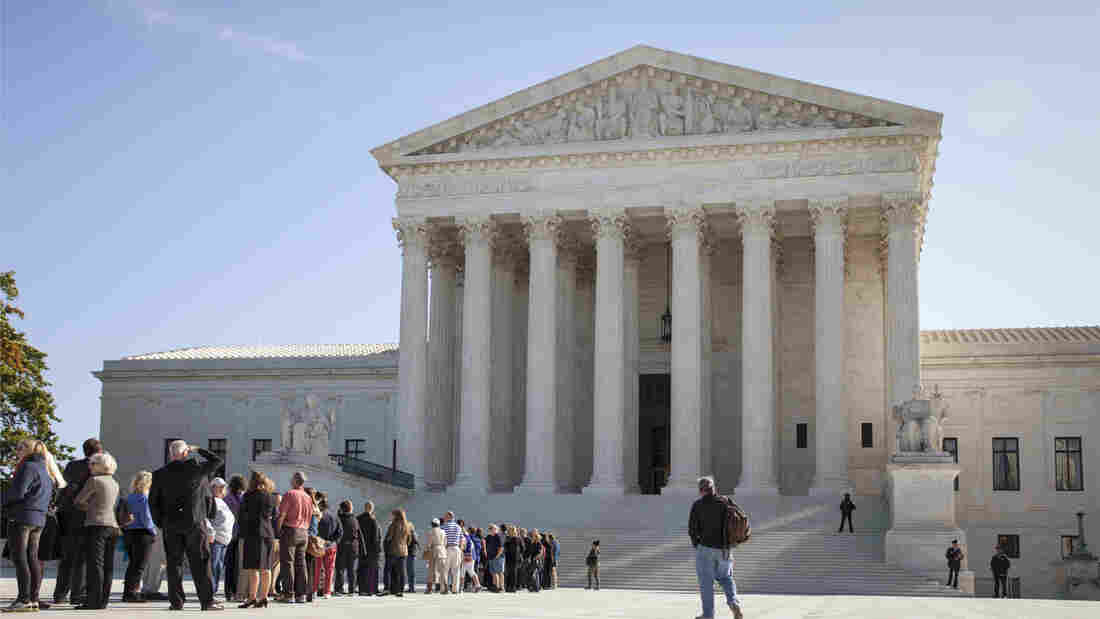 People wait to enter the Supreme Court in Washington Monday as it begins its new term. The justices cleared the way Monday for an immediate expansion of same-sex marriage by unexpectedly and tersely turning away appeals from five states seeking to prohibit gay and lesbian unions. J. Scott Applewhite/AP hide caption 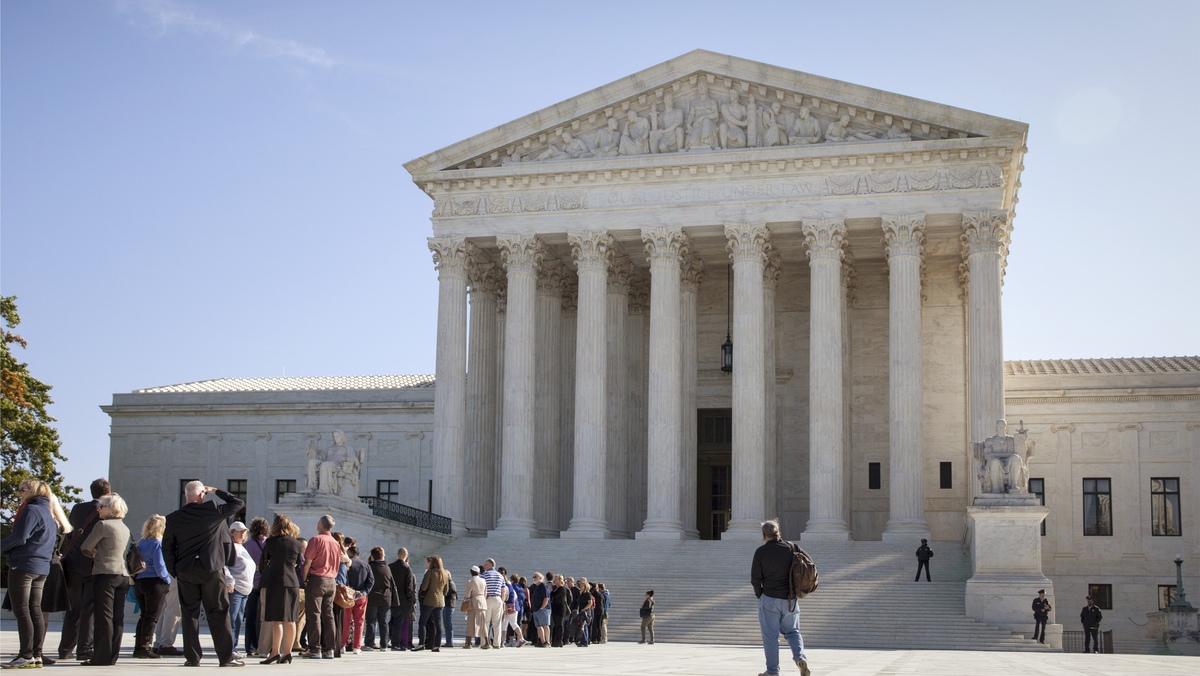 People wait to enter the Supreme Court in Washington Monday as it begins its new term. The justices cleared the way Monday for an immediate expansion of same-sex marriage by unexpectedly and tersely turning away appeals from five states seeking to prohibit gay and lesbian unions.

Technically, the Supreme Court Monday did not establish a constitutional right for same-sex couples to marry. It merely declined an opportunity to rule definitely one way or the other on the question.

But in the not-too-long run, the consequences may well be the same. Because the situation the court created — or acknowledged — will almost surely continue trending in favor of same-sex couples who want to marry.

Conversely, the legal ground is eroding for states that want to stop such marriages or deny them legal recognition.

As thousands more same-sex couples marry all over the country, this legal climate change becomes a kind of fait accompli.

For the moment, the court's denial of review means state-enacted bans on same-sex marriage in five states were wiped off the books. The denial meant lower court rulings that spiked those bans will now stand. Let's call them The Five.

So couples in The Five could begin marrying regardless of gender as of today — and some got licenses immediately.

In six other states that had banned the practice, further legal proceedings may be needed to apply the rulings of the relevant federal circuit courts of appeal. But because these six are connected to The Five through the federal circuit system (jurisdictions for the purpose of appealing federal court decisions) the same judgment will apply. Effectuating that judgment in these six states is a short step — and one that is already in motion.

That will bring the number of states where gay marriage has been legalized, either by the state itself or through these federal cases, to 30. And these states are home to the vast majority of the national population.

There are still ways for the Supreme Court to reassert itself in this debate. But the question is, do they want to?

Many legal experts have looked over the landscape and perceived both a trend in the federal system and a signal from the nine justices who sit at its zenith.

Amy Howe, the editor of the highly regarded SCOTUSBlog, told NPR's Nina Totenberg that the justices "are very smart people" and added, "I don't think they're going to be able to put the genie back in the bottle."

The genie got out back in June 2013, when the court decided Windsor v. United States, throwing out the 1996 Defense of Marriage Act, or DOMA. By smacking down this pivotal federal statute, the court threw wide the gates for other challenges to state laws barring gay marriage or otherwise treating gays differently.

Now, as those challenges come in waves, the federal courts at all levels are applying the reasoning from Windsor with great consistency.

If the high court wanted to use that as an occasion to declare a constitutional right, it could have taken one or more of the cases it denied today. But opponents of gay marriage had hoped the court would take such a case for precisely the opposite reason — to uphold the states' right to ban gay marriage.

Instead, Howe observes, the justices instructed their confreres at lower levels of the pyramid to "keep on doing what you're doing."

In other words, there isn't a clear majority of the nine to settle the matter with a landmark ruling one way or the other.

They could choose to re-enter the fray at some later point, perhaps when another circuit court of appeals weighs in with a ruling that supports the state's right to ban gay marriage. That would at least create a conflict for the Supreme Court to resolve.

Or it could revisit the issue later, perhaps when a clear majority has formed either to prohibit gay marriage or to permit it. That might require waiting until Justice Anthony Kennedy, a swing vote on such issues, declares himself. Or it could await the next retirement of a sitting justice and the confirmation of a successor.

But as the number of legal gay marriages skyrockets, and the practice becomes both legal and common across most of the states and most of the population, a future court is less and less likely to rescind it.

Or even take such a case.