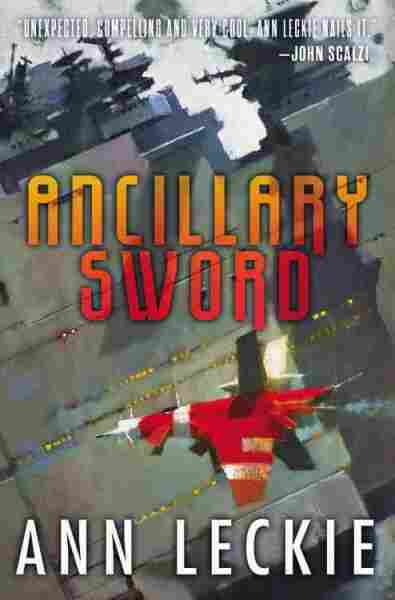 "Oh, tree! Eat the fish! This granite folds a peach!"

Last year, Anne Leckie's Ancillary Justice introduced Breq, the reanimated-corpse soldier (called an ancillary) separated from her starship's hive mind, out for revenge against the Radchaai Empire that made her, and stymied by the terrible inconveniences of conscience. It went on to win the Nebula, Hugo and Arthur C. Clarke Awards, which means two things: One, this is the sort of space opera audiences have been waiting for; two, all eyes are on Ancillary Sword.

It's to the benefit of Ancillary Sword that it doesn't seem to much care. After the deliberate but suspenseful Ancillary Justice, which was both a tricky character study and a thriller of small-stakes revenge on an accidentally vast scale, Ancillary Sword is, quite contentedly, a different beast. It quickly ties up lingering threads, and sends Breq out at the helm of a ship. She's assigned to a border station, where she'll contend with conflicts that the people in power would prefer to keep hidden, whether aboard station or on the planet below — and, amid the first whispers of war, both inside and outside the Empire.

But even with that epic at the edges, Ancillary Sword concerns itself with the realities that were only on the fringes of its predecessor. With Breq no longer an outsider, the book is newly concerned with what it means to exist within the Empire: In a regime where "no just act could be improper, no proper act unjust," what happens when an empire presses worlds through a single "civilizing" mold, and moves on?

Sword is more directly political than Justice, which lends some wonderful breathing room to all the telling details that adorn this military-Rococo empire like a memorial badge, and means that the unsolvable conflicts within the empire get their messy due. Some of the machinations on the station and the attempts to call powerful people to heel have the air of original-series Star Trek, earnest and timely concepts tipping occasionally into unsubtle allegory. But though the thickening plots prevent the same delicate character work that came before, Breq remains an effortless narrator, both sharply present and emotionally oblique. And many of the best grace notes still lean subtly on the carefully cultivated inner life of the first book.

In particular, Breq's relationship with her new ship is familiar omnipresence tinged with poisoned nostalgia, exacerbated because the ship's previous captain wanted the human soldiers to behave like stoic ancillaries. It's one of the book's best threads both in theme and in prose, neatly structured to provide a microcosm of the Empire itself.

And it's also a handy portal inward: the Ship sees and reports her soldiers' every move, and while their outward stoicism is directed at Breq — who sees right through it — there are still the bursts of resentment, passion and drunken sing-along translations (above, one of many echoes) that only isolate her further. Leckie's prose is at its best here, with Breq's unconscious camaraderie and understated biases doled out in engrossing hints. It's clever insight into an often-detached narrator, and creates both personal and community dynamics that avoid being neatly defined.

It's that sense of a complicated world — the inability to either reach a far enough remove to eliminate injustice, or get close enough to understand everyone's meanings — that runs most strongly through the Ancillary books. Breq's language has an exclusively feminine pronoun, something that's been a point of praise among reviewers and readers. But while it neatly eliminates gender issues among its sprawling cast, that particular detail is a function, not a premise, and it's most impressive for what it accomplishes. By removing gender from the increasingly complicated identity map that the Ancillary books explore, Leckie highlights the many other ways people are skilled at harming each other through any power deferential available.

And it's these never-explicitly-articulated dynamics that inform Breq's world-weariness. She understands, despite herself, the webs of patronage and family influence that slowly strangle, and the gender-leveling just means one less exhausting dynamic to parse among people whose inconsistencies still confound her. She's a keen observer, and within her dry narration there's that lingering sense of a Ship's omnipresence, seeing it all but unable to do any good except through others. But the world of these novels seems to exist to prove her wrong, and as Ancillary Sword lays out a game that's still unclear, Breq remains a central player readers will be happy to follow.