Accessibility links
Extra-Permanent Ink: Preserving Your Tattoos After Death Got a killer tat? There's no reason for it to die with you. Thanks to a Dutch tattoo artist, if you sign the right forms and pay the right price, a lab can preserve your body art after you die. 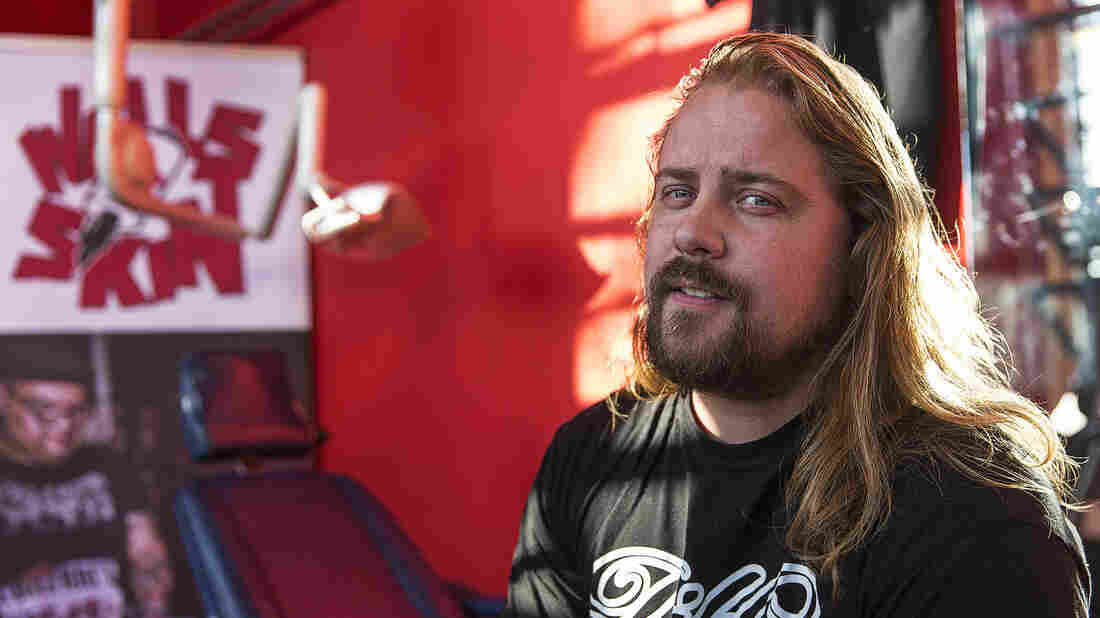 Tattoo artist Peter van der Helm, shown in his studio in Amsterdam in December 2013, has set up a business to preserve the tattoos of the dead. Michael Kooren/Reuters/Corbis hide caption 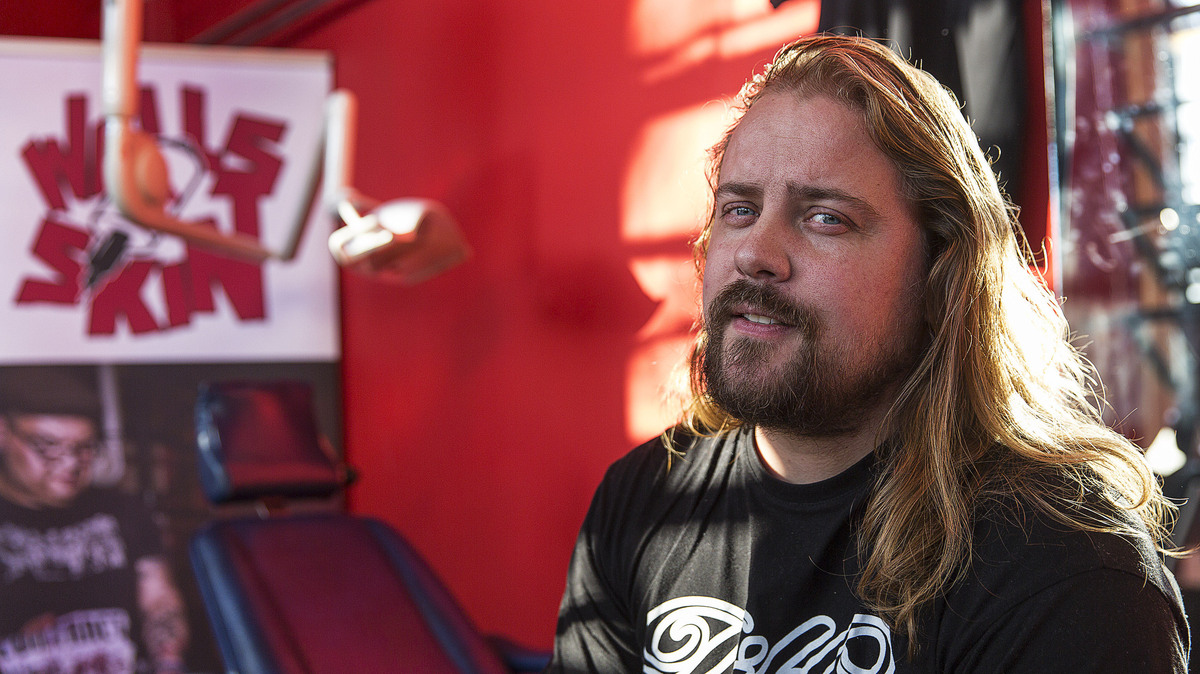 Tattoo artist Peter van der Helm, shown in his studio in Amsterdam in December 2013, has set up a business to preserve the tattoos of the dead.

Luci Cook, 26, twists to look down over her left shoulder at the portrait of a young woman that covers the back of her calf. Dark hair and crows frame the eerie face of Chelsea Wolfe, Cook's favorite musician.

"I thought you'd want this one," Cook says, glancing at her close friend and tattoo artist Sheena Coffee, 29.

Cook is planning ahead, asking loved ones which of her 14 tattoos they'd want when she's gone. Cook has reason to think about death more than most people her age. She developed heart failure as a child, possibly from a virus, has had two heart transplants and needs a third. 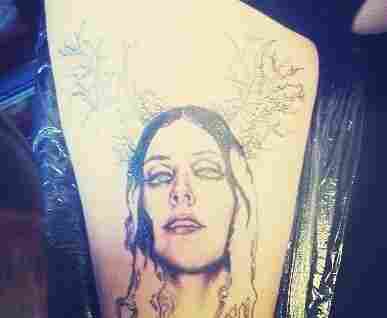 Luci Cook doesn't want her tattoos to die with her. She's asking her friends and family which ones they' want to receive in the event that she dies before they do. Courtesy Luci Cook hide caption

"It always feels like I'm living my life hurriedly," Cook says, "but then I never die, so it's constantly like ..." She pauses, searching for an image: "pressure-cooker time."

If doctors can't find the right heart match in time, Cook wants at least some of her tattoos to live on, preserving both her memory and the art. Yes, that means having someone cut the skin off her body, treat it and have it framed.

More people may think like Cook does about their tats than you'd imagine. With 38 percent of 18- to 29-year-old Americans now tatted, according to Pew, people are thinking differently about body art during life — and possibly after death.

For those who see their tattoos as art and part of their personality, a new tradition is emerging: Tattoos are joining the tradition of wisps of hair in a locket and urns full of ashes on the mantle.

Those who want the procedure will depend on pathologists, as Cook is; she's reviewing forms required by the Foundation for the Art and Science of Tattooing, based in Amsterdam. After an American pathologist removes the tattoo, that doctor will send the skin, frozen or packed in formaldehyde, to a lab in Europe. The foundation does not list the location, it says, to protect the pathologists from unwanted publicity.

Other Ways For A Body To Live On

In the lab, pathologists will extract water and fat from the skin and replace it with a liquid polymer, typically silicone. In other words: "We make it into plastic," says Peter van der Helm, who started the foundation that would handle Cook's tattoos. "Your tattoo will be preserved forever and ever."

Van der Helm has 50 to 60 clients who have signed or say they plan to sign the forms. He launched the project almost one year ago, in November 2013. Everyone who has signed a contract is still alive.

For years, van der Helm, who is a tattoo artist, heard clients say with pride, "When I die, I want to be in a museum." Now, he says, they can be. Clients donate their tattoos to the foundation, which then lends them to family members. Some tattoos may be displayed by the foundation.

Some of these clients, as with Cook, share an attachment to their tattoos with a spouse, sibling or child, who's expected to outlive them. In some cases, the client's tattoo is the work of a famous artist and may have some monetary value.

Van der Helm is negotiating with an 80-year-old man who wants to preserve his full body skin. It would be very expensive, van der Helm acknowledges, but then "these people already spent $20,000, maybe $30,000 to get the tattoos, so saving it's a fraction of that cost."

Preserving a tattoo "makes you kind of immortal, and I think many people like that," says foundation Chairwoman Judith van Bezu. The tattoo is "an art form that shouldn't just get lost when people die."

The minimum price of immortality is 300 euros, roughly $400, to preserve a 4-inch tattoo.

Van der Helm says he has the first commercial tattoo preservation business in the world. But cutting tattoos off dead bodies and saving them is nothing new, says Matthew Lodder, an art historian at the University of Essex who is finishing a book on the history of tattoos. "People have been doing it for hundreds if not thousands of years."

There are collections at museums in Krakow, Poland; Tokyo; and London. Most of these tattoos were removed without the prior consent of their owner, says Lodder. So van der Helm is taking tattoo preservation in a new direction with contracts, a modernized chemical process and clear ownership rules.

But Lodder doesn't think the idea will catch on widely. Blame the ick factor.

When Cook asks, 'Which one of my tattoos do you want?' the reaction from those closest to her is mixed.

"There's still too much of a taboo against keeping bits of a dead body around," Lodder says. Sure, people keep the ashes from a cremation, "but they aren't visible and don't look like part of a dead body."

When Cook asks, "Which one of my tattoos do you want?" the reaction from those closest to her is mixed.

Her boyfriend wants the schooner, what he calls the Old Spice boat, on Cook's arm. It was her first tattoo, the only one she now regrets, but it makes the two of them laugh.

A Mortician Talks Openly About Death, And Wants You To, Too

Coffee, the tattoo artist, isn't sure she likes the idea of removing or receiving one of Cook's tattoos. They are "living art," she says, "where every curve of the muscle or dimple in the flesh is something you work into the design; it's just so intimate."

That intimacy may be lost when the tattoo is just a flat patch of skin, Coffee says.

But really, Coffee says, she doesn't want to think about the option. No matter what, "the idea of losing my friend stings."