Accessibility links
Liberian Singers Use The Power Of Music To Raise Ebola Awareness Early on in the epidemic, the government and aid agencies commissioned songs that just ended up terrifying people. But the newer songs on the radio are catchy and danceable — as well as informative. 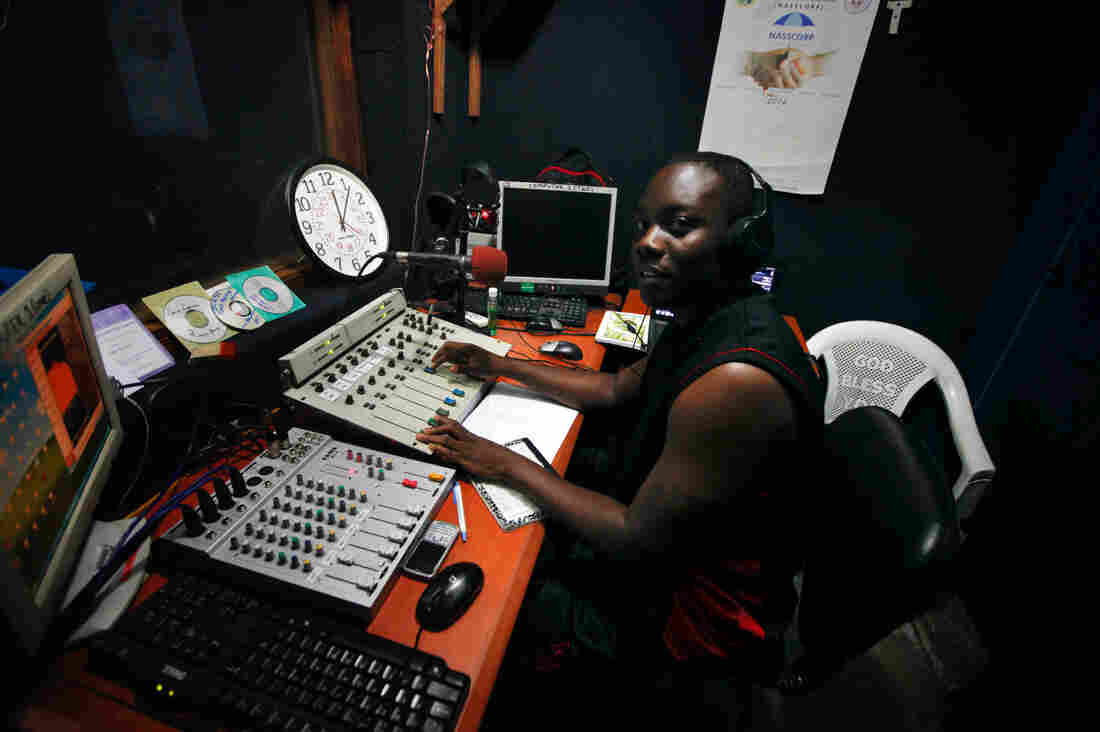 Elliott Adekoya, 31, aka The Milkman, is a DJ at Monrovia's Sky FM radio, pictured here his DJ booth. He is also part of a group of 45 Liberian musicians called the Save Liberia Project. They want to get the word out that Ebola is real, but it is not a death sentence. He says that message, which was propagated early on by the Ministry of Health, actually contributed to the problem. John W. Poole/NPR hide caption

In West Africa, one of the simplest ways to slow the Ebola outbreak is to educate people about how to keep from getting infected with the virus. Now, there are some signs that Ebola awareness is indeed driving down the number of cases in parts of Liberia — and Liberian musicians and DJs may deserve some of the credit.

The airwaves in Liberia are saturated with songs about this disease. Early on in the epidemic the government and aid agencies commissioned public awareness songs but they actually ended up terrifying people. The message: There's no cure. Don't touch anybody. Stop eating bush meat.

"It used to be a death sentence to people, so it scared people away," says Elliott Adekoya, a 31-year-old musician and disc jockey who works at one of Monrovia's most popular pop stations, Sky FM. "That's how people started running away, from one community to another. And people saw it worse, like a curse."

Adekoya says people started to see that you can survive the disease, and that listeners don't want to hear those despondent messages all the time on the radio.

"The Ebola scenario is something that people don't want to listen to anymore, because they're so fed up, so sick of it," he says. "If you're making a song — an Ebola song that people gonna listen to now — it has to be danceable."

Adekoya, also known as The Milkman, says one of the most popular songs right now is by F.A. and Soul Fresh, called "Ebola is Real." It tells people to protect themselves from getting infected. He says two of the most powerful phrases are "The thing, Ebola, now come" and "The thing now show face."

"'The thing now come, the thing now show face.' That's the thing that the children enjoy," he says. "People go around, people be like 'No shaking hands my man.' In the Liberian way when they say, 'The thing now come,' it means the thing is here. Now we know it's here and it has shown its face. So we all understand that's in our midst now; we gotta be careful."

Radio remains an incredibly powerful medium in West Africa. It blasts from shops and young men crank it up in rust-bucket taxis. You hear it playing from simple shacks and tidy stucco homes.

In addition to the Ebola songs, announcers are regularly talking about the disease. They urge people to stay away from dead bodies, regularly wash your hands and get to a treatment center right away if you have symptoms.

Some of the most popular Ebola songs get played repeatedly. The chorus of "Ebola is Real" wafts all over the city. But it's not just pop music that has taken on the epidemic. There are R&B songs, slow jams and Afro-pop tunes as well.

Adekoya, at Sky-FM, says music is having an impact. He says it is a way to express frustration and let off steam and a way to remind people to protect themselves from the disease. It's a way for Liberians to come together in the face of a terrifying illness.

Adekoya is particularly excited about a project called "Save Liberia." It's sort of a Liberian version of "We Are the World" and it brings together 45 of the country's most famous musicians.

"The Save Liberia project is the main thing I'm looking forward to, and I just want to see how it's going to turn things around," he says.

And Adekoya believes it will have an impact on Ebola, because he has faith in the power of music.