Accessibility links
'Marry Me' Throws Plenty Of Jokes (And Its Lead Actress) At The Wall NBC's new romantic comedy Marry Me may wind up joining a frustrating group of shows that struggle to survive on broadcast, where appealing to everyone is key. 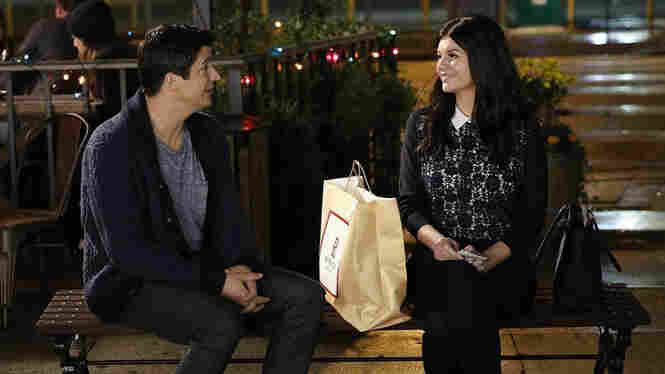 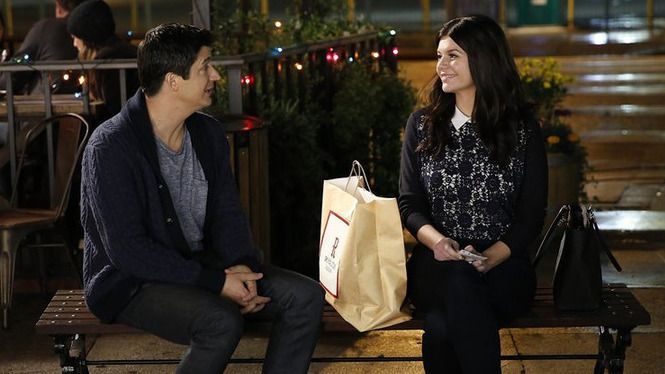 Ken Marino and Casey Wilson star in NBC's Marry Me.

I'm not sure I've ever seen a comedy use an opening scene to put a main character in a hole as deep as the one Marry Me digs for Annie, played by Casey Wilson. We meet her as she and her longtime boyfriend Jake (Ken Marino) return from a vacation during which she believed he would propose and he didn't. When she realizes that he also doesn't plan to propose immediately upon their return, she cracks, turns her back on him, and delivers a lengthy, frustration-filled rant that includes not only her feelings about their relationship, but also her feelings about their friends and his mother.

Of course, behind her, he's on one knee holding out a ring, and all their friends (and his mother) are hiding, preparing to jump out and surprise her with an engagement party.

This is a very, very silly scene, and one in which she seems pretty aggressively terrible. It is also, however, a showcase for Wilson, whose approach to comedy has the same utter lack of vanity it did on Happy Endings, the other show she did with the same creator, David Caspe (to whom she is now married).

Despite the presence of the superb Ken Marino (veteran of all manner of weird comedy, including the film Wet Hot American Summer, TV shows like Party Down, the web series turned web-and-cable series Burning Love, and even the recently revived Veronica Mars), this feels like a Caspe/Wilson project first and foremost, and it does echo the absurdist, restless, reckless feel of Happy Endings. That show was only sort of about anything at all — it was quickly irrelevant that it began with the busted relationship of two of the six friends at its core — and, for the most part, it was a series of little comedy pieces and a high-output joke factory.

(When talking about Happy Endings, I almost always cite a joke they made about a "one-man experimental band called Yoko Uno." It's a joke that has absolutely nothing to do with anything; it's literally just a joke. It's in there because it struck somebody funny, not because it advances the story or really sheds light on a character, and it's not there to become a saying, the way little jokes on Seinfeld and Sex And The City often seemed to be.)

Marry Me could be, if it's the show I expect it might become in future episodes, part of an era of broadcast comedies that barely hang on because their strength is in the specificity of their sensibilities, which is almost by definition a poor fit for something called "broadcast." It's easier to make weird comedy work on cable, where you can be a success with a small and passionate audience that hooks into a creator's very particular way of looking at the world and of writing jokes, despite the fact that that style is not for everybody.

One of the most interesting things about the pilot of Marry Me is that it manages to create a couple of very endearing scenes for Annie and Jake (when I saw Wilson and Marino playing their younger selves flirting in a flashback when they first met, I sort of wanted to watch more of that show), but for the most part, it leaves the roughness of the couple in place through the pilot. Wilson, in particular, embraces Annie's manic energy because it's funny, and she dares to be a female character in a romantic comedy who is not immediately all that likable — on purpose.

And she isn't unlikable in the ways we often draw as secretly awesome and that have been, for years, perfectly fine qualities for characters in comedy to have. She's not unlikable in that she's tough and blunt and jaded. She's unlikable in that she's needy and awkward and difficult. But there's something about the way Wilson commits to this kind of character (who indeed will be a balm to those who miss Penny on Happy Endings) that makes it, for me, far more pleasurable than the smooth-edged, gentle-joked, somehow safely irreverent comedy in which broadcast TV often traffics.

The current heartbreak of comedy on broadcast television is not that it's terrible; it's that we've been through a brutal handful of seasons in which they make good shows and not enough people watch them. Sometimes, as with Happy Endings itself, it seems like the point of view may be too particular for broadcast. Sometimes, as with Fox's good-hearted military comedy Enlisted, its family show Ben and Kate, and ABC's fabulous Trophy Wife, it's not really clear why they didn't take off, much as it's easy in some cases to find fault with scheduling or promotion. Broadcast is a hard environment even for — maybe especially for — good comedy at the moment.

Marry Me was divisive among the critics I know when it was at press tour this summer. Some people liked it, some people absolutely hated it, and a lot of people believed this is exactly the kind of show that you need more than one episode to evaluate. (I fall into that last category.) But I tend to gravitate toward it because it has both good jokes and lots of jokes, because I love the cast (which, in addition to Wilson and Marino, includes Tim Meadows and Dan Bucatinsky as Annie's dads), and because I've followed Caspe into Weirdsville before and never, ever been sorry.

I don't know that this can last on broadcast TV. I don't think Caspe could make a show everybody liked if he tried. This is his thing — weird, hyper, jangled, very-strange-bird comedy — and I tend to dig it. Not everybody wants to watch a woman fling herself fully into a wall, but what can I say? I'm a cheap laugh.