Accessibility links
Beauty And Loss In 'The Tale Of Princess Kaguya' The latest film from the celebrated Studio Ghibli follows a girl far from home who must inevitably return there. 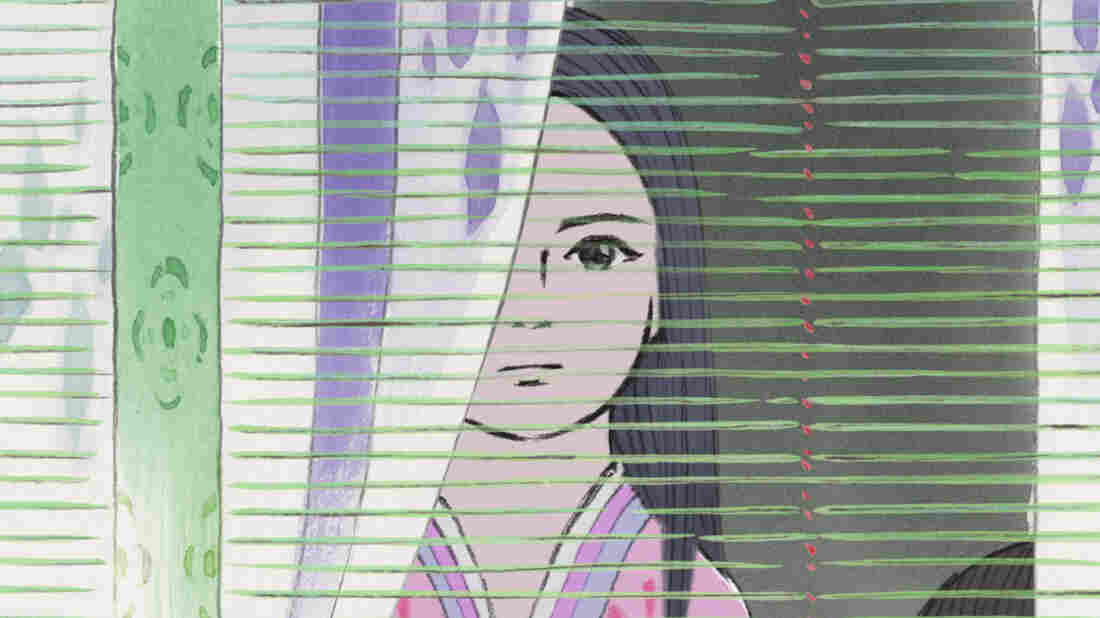 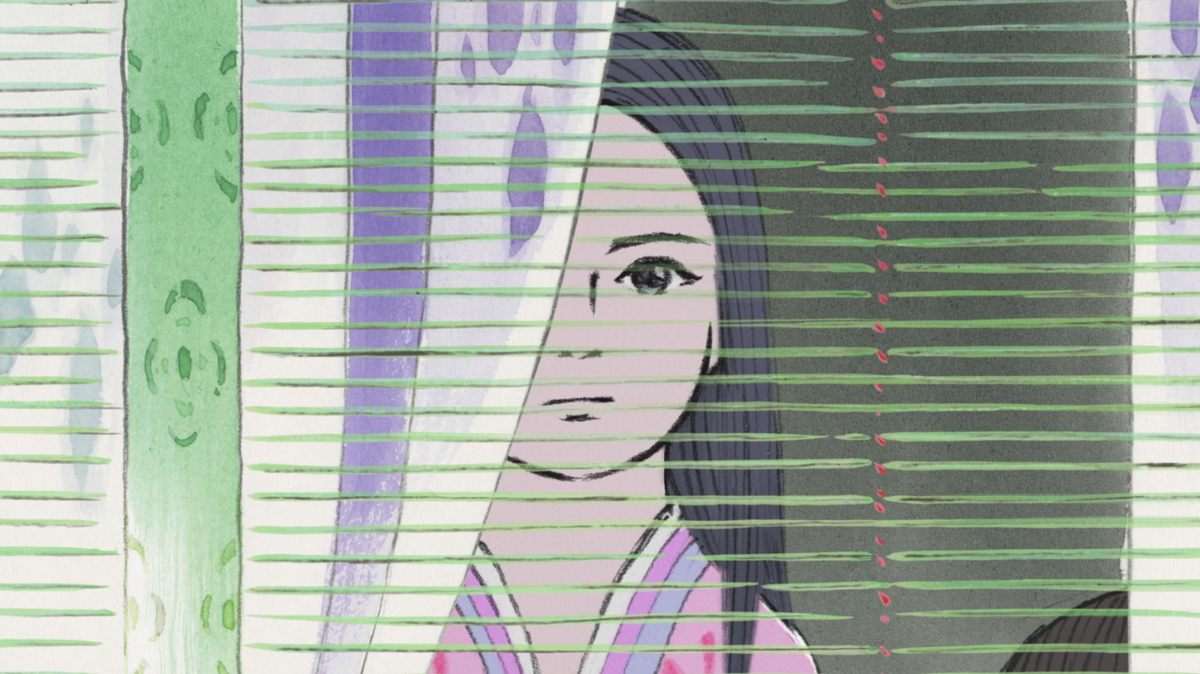 The Tale of Princess Kaguya.

My first encounter with the lovely 10th-century Japanese folktale The Tale of the Bamboo Cutter was in the Sesame Street special Big Bird Goes to Japan. A kind and beautiful young woman named Kaguya-hime appears out of nowhere to take the Yellow One and his canine pal Barkley on a jaunt to Kyoto. They have fun, and then the mysteriously sad woman reveals that she is royalty in civilian dress and must return to her home on the moon. Bird and Barkley were marginally less inconsolable than were my toddler daughter and I. We all coped, as will every other child large or small when they see the ravishing The Tale of Princess Kaguya.

As the legend goes, the princess was sent to Earth as punishment for an undisclosed transgression. We don't learn what her crime was in The Tale of Princess Kaguya, the latest offering from Hayao Miyazaki's esteemed Studio Ghibli, whose hand-drawn, animated tales of high-spirited rebel girls have delighted countless kids and parents around the world. Aside from their beauty, movies like Princess Mononoke, Spirited Away, My Neighbor Totoro and the hands-down favorite around our house, Kiki's Delivery Service, brought to life a small army of exuberantly disobedient girls (and boys, now and again) bent on running their own experimental show.

The plot is basic fairy-tale fare. A baby drops from the sky and is found cradled inside a bamboo plant by a childless old woodcutter and his wife, voiced in the English-language edition by James Caan and Mary Steenburgen. They raise her as their own, and the cherished sprite (Chloe Grace Moretz) runs wild in the forest with her posse of peasant kids, a normal girl except for the strange growth spurts that bring her to womanhood at a rapid clip. When her beauty and vitality begin to attract attention, the old man, spurred by ambition and greed, moves his daughter to court to marry her up. Pining for home and the handsome peasant boy (Darren Criss) she left behind, the distraught Kaguya-hime spurns her suitors (the Emperor among them) by setting them impossible tasks. Take that, patriarchy.

The Tale of Princess Kaguya is not directed by Miyazaki, who recently announced his retirement, but by his longtime collaborator Isao Takahata, who also made the beautiful Grave of the Fireflies. The new movie bears all the hallmarks of Ghibli house style, including the exquisite palette, in this case a delicate watercolor of pastels evoking, with not a hint of cute, a country girl's rapturous harmony with nature. A bamboo forest subtly changes color with the light; a leaf trembles in the breeze; a toddler turns in her sleep and curls her arm around her adoptive mother. Kaguya-hime is a wild thing in perpetual fluid motion, her long black hair flowing in sync with her body. Strapped into royal harness, she grows still and rigid under the heavy ceremonial vestments, the very picture of grief until, at last, she takes charge of her own fate.

Unlike many Studio Ghibli movies, The Tale of Princess Kaguya is not a collaboration with the Disney company, which may be one reason why it doesn't pursue a happy ending as we understand it in the West. Like all fairy tales worth their salt, the movie trusts children to take on the big themes of life, death and despair included, and thus removes the sting.

Kaguya takes her leave, as she must, but with a celestial orchestra and a magic mantle to help her through the transition. The moment of her passing is brought off with unsettling candor, but also with a compassion that promises an end to suffering, longing and loss — even, for those who wish it, another future to come. If I were rich, I'd give a boxed set of Studio Ghibli movies to every child on Earth at birth. For the sheer joy of the experience, and to see them through their lives.