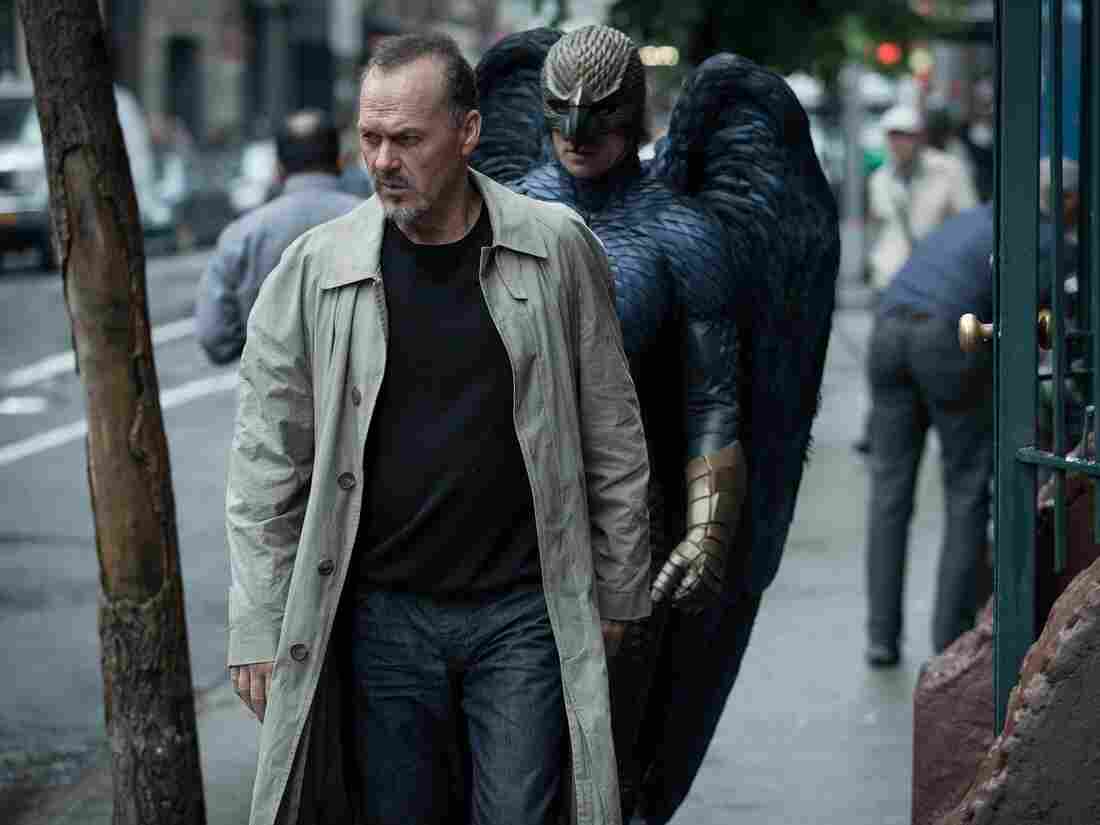 In Birdman, Michael Keaton (a real-life former Batman) plays a former movie superhero who's trying to get a grasp on his career. Atsushi Nishijima/ Fox Searchlight hide caption 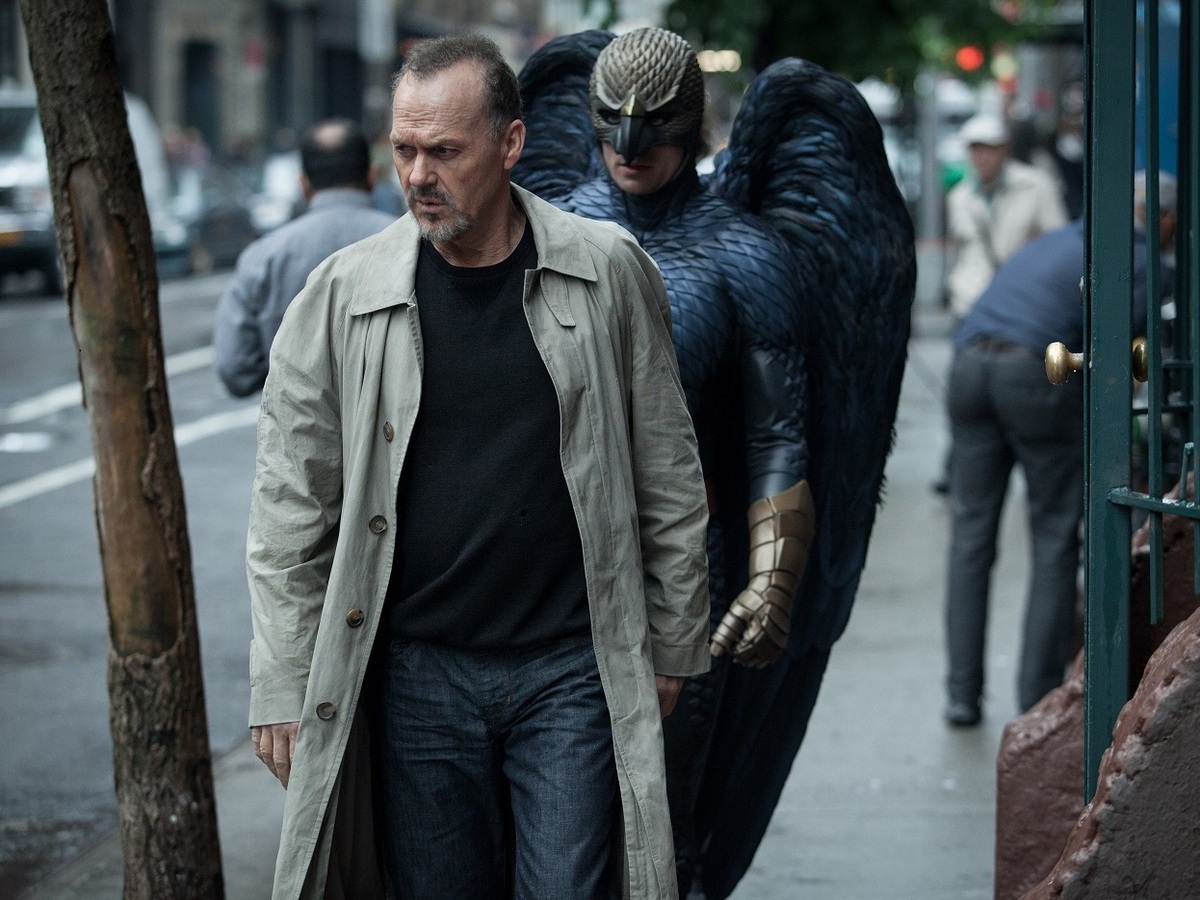 In Birdman, Michael Keaton (a real-life former Batman) plays a former movie superhero who's trying to get a grasp on his career.

Birdman's opening shot has a meteor flaring across a twilit sky — a dying star falling to earth being an apt first image for a movie about a film superhero who has flamed out.

The next shot shows what's happened to him: ex-Birdman Riggan Thomson (played by ex-Batman Michael Keaton) facing away from the camera in yoga position in his dressing room at Broadway's St. James Theater. As Riggan attempts a comeback on stage, director Alejandro Iñárritu's camera will follow him, seemingly without a single edit for almost two hours, a stunt we'll come back to. But first, let's note one odd thing about the way Riggan is sitting. He is floating in lotus position, about 3 feet off the ground. One other oddity: In his head he hears his own accusing voice, amplified the way it was decades earlier when he was Birdman.

"How did we end up here?" the voice growls. "This place is horrible. Smells like balls. You were a movie star, remember?"

Now, with the last bit of cash from that stardom, Riggan is producing his own Broadway adaptation of the Raymond Carver short story "What We Talk About When We Talk About Love," directed by and starring himself. It's what's known in the trade as a vanity production — his possibly pregnant girlfriend (Andrea Riseborough) is in it, his stoner daughter (Emma Stone) is his personal assistant, his very nervous best friend (Zack Galifianakis) is stage manager. And after a — um, let's go with "lucky" backstage accident, it's a vanity production minus one co-star.

Happily, a stage star who's just quit/been fired from another gig is almost literally waiting in the wings, having helped his girlfriend (Naomi Watts) learn her lines. And while he comes with his own baggage — where the original co-star couldn't express emotions, Mike is constantly exploding — the play starts previews tomorrow, so what the hell. 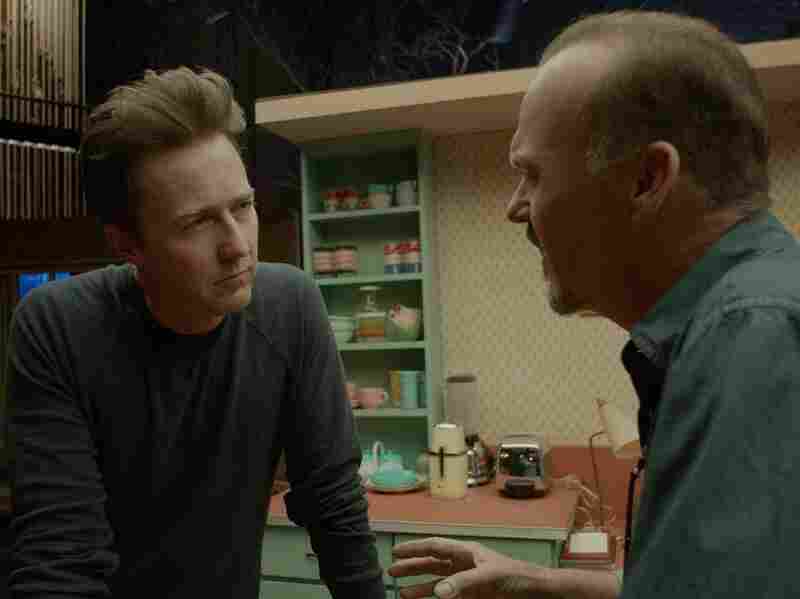 Mike (Edward Norton) has a tendency to explode on set. Courtesy of Fox Searchlight hide caption 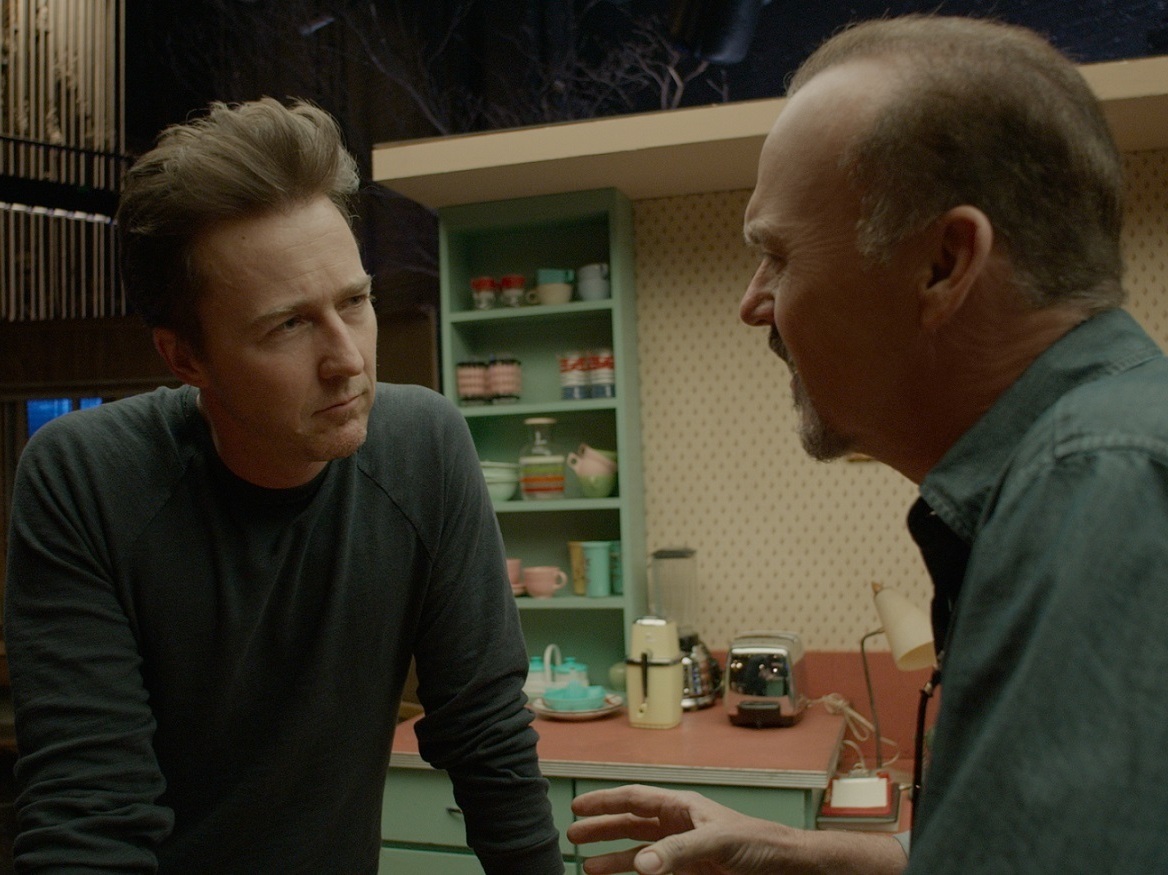 Mike (Edward Norton) has a tendency to explode on set.

This guy is played by Edward Norton, who is also an ex-superhero in real life (his Hulk, remember, had explosion issues), and the celebrity in-jokes don't end with the casting. Keaton recounts a nightmare in which he's upstaged at his own funeral by (wink, wink) George Clooney, and there are savagely funny swipes at critics, in-the-know observations about the price of fame, not to mention a nifty literary riff on that Carver short story Riggan has supposedly adapted for the stage, but that's actually taking over his life. Read it before you go, and you'll marvel at the film's intricate plotting.

All part of the entertainingly complicated jigsaw puzzle Iñárritu has made of Birdman. His full title is Birdman or (The Unexpected Virtue of Ignorance), but rest assured, the more you know, the more fun it'll be — all real-life connections fodder for other connections as the film shreds time, fame, family and the difference between movie acting and stage acting. That one-continuous-tracking shot conceit is designed to split the difference, forcing the actors to play through long stretches — no cuts to protect them — as the camera zips after them down hallways, into theaters empty and full, and, at one deliriously funny point, out into a Times Square mobbed with celebrity-chasers. But it's also a stupendously choreographed bit of camerawork, demanding not just for actors who must've been forever ducking into closets and behind furniture, but also for cinematographer Emmanuel Lubezki, the miracle worker who designed those breath-catchingly lengthy tracking shots in Alfonso Cuarón's Children of Men, and who figured out how to open Gravity with a 14-minute tour-de-force single take in outer space.

Doing a whole movie this way isn't unprecedented, of course. Hitchcock's Rope did it without digital trickery more than half a century ago. Still, it's a great cinematic stunt, even when you think you've found the hidden edits. And it makes Birdman as exhilarating a flight of fantasy as you're likely to see anytime soon.