Accessibility links
Predictions Of 'Peak Oil' Production Prove Slippery Just a few years ago, authors were predicting production would soon hit a peak and then decline. But since then, supplies have surged. So are the forecasters now slapping themselves in the head? 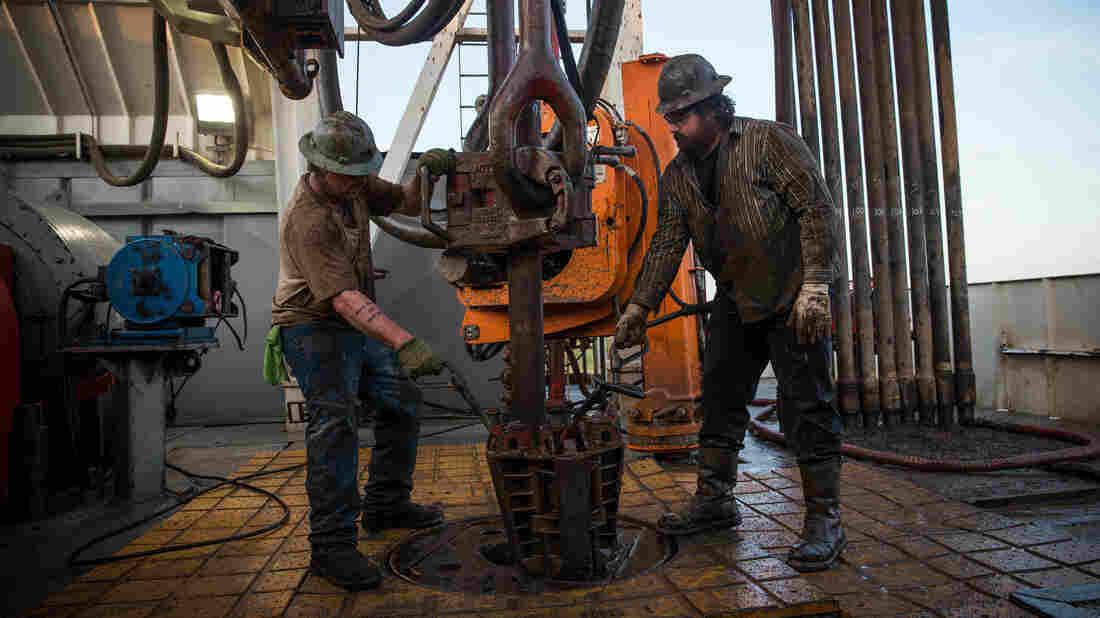 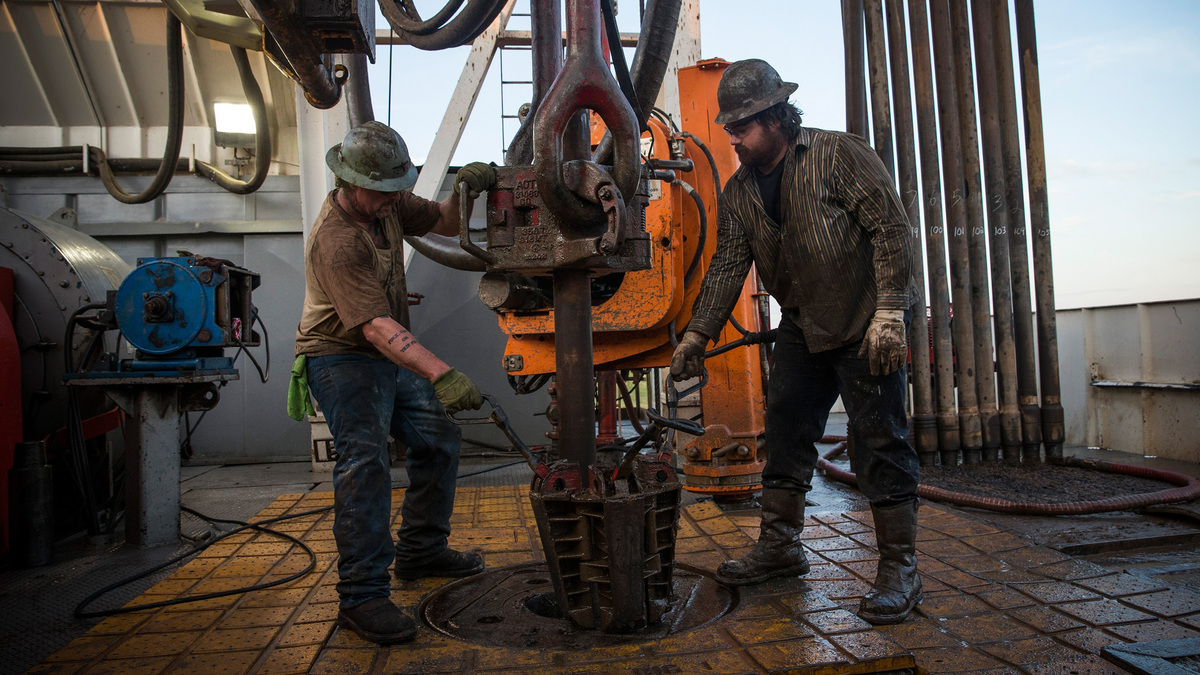 Workers drill for oil in the Bakken shale formation outside Watford City, N.D., an area experiencing an oil boom.

The dustiest portion of my home library includes the 1980s books — about how Japan's economy would dominate the world.

And then there are the 1990s books — about how the Y2K computer glitch would end the modern era.

Go up one more shelf for the late 2000s books — about oil "peaking." The authors claimed global oil production was reaching a peak and would soon decline, causing economic chaos.

The titles include Peak Oil and the Second Great Depression, Peak Oil Survival and When Oil Peaked. 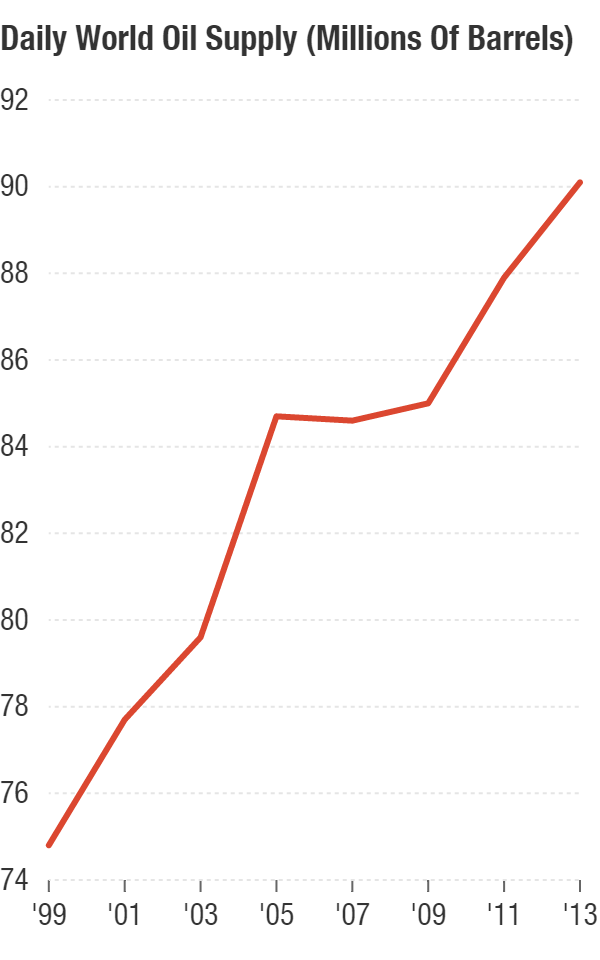 At the same time, the growth rate for demand has been shrinking. This week, the International Energy Agency cut its forecast for oil-demand growth for this year and next. Turns out, oil demand growth — not production — is what appears to have peaked.

Now prices are plunging, down around 25 percent since June.

What did the forecasters get so wrong? In large measure, their mistake was in failing to appreciate the impact of a relatively new technology, hydraulic fracturing, or fracking.

Because of fracking, oil is being extracted from shale formations in Texas and North Dakota. Production has shot up so quickly in those areas that the United States is now the world's largest source of oil and natural gas liquids, overtaking Saudi Arabia and Russia.

This new competition has shocked OPEC. Members say they want to maintain their current market share, so they are keeping up production and even boosting it.

Bottom line: The peak of production is nowhere on the horizon.

So are the authors of "peaking" books now slapping themselves in the head and admitting they had it all wrong?

Some are, at least a bit.

Energy analyst Chris Nelder wrote a book in 2008 titled Profit from the Peak. The cover's inside flap said: "There is no doubt that oil production will peak, if it hasn't already, and that all other fossil fuels will peak soon after."

In a phone discussion about his prediction, Nelder said "my expectation has not materialized."

The surge in oil production in Texas and North Dakota "has really surprised everyone," he said. "If you had told me five years ago we'd be producing more oil today, I would have said, 'No way.' I did not believe at all that this would happen."

But while he acknowledges that oil has not peaked yet, he says it might soon because "oil is trapped on a narrow ledge" where it must stand on stable prices. Holding the price of a barrel steady around $110 for years allows energy companies to invest in fracking operations.

Over the past three years, those are exactly the conditions drillers have enjoyed. Oil was sitting pretty on a stable plateau of roughly $110 a barrel. But now, as global growth slows, the price is plunging, down to around $83 per barrel.

With U.S. Oil Supply Climbing, Some Call For End To Export Ban

"China is cooling off quite a bit. Much of Europe is slipping back towards recession," Nelder said. If oil prices stay low for long, frackers may need to stand down. "There is a lower level [in price] where they just can't make money," he said.

And with OPEC pumping so much oil now to hold down prices, maybe they are using up their supplies more quickly. "Depletion never sleeps," he said.

So perhaps Nelder has been wrong so far, but could be right before too long.

That's what Kenneth Worth thinks. He's the author of Peak Oil and the Second Great Depression, a 2010 book. He says the fracking boom has been so frenzied in this decade that drillers may have extracted the cheapest oil already. With fracking, oil supplies "deplete very rapidly. You have to keep drilling really fast," he said.

With prices now so low, the money to keep up the frenzy may not be there.

So maybe the "peaking" predictions weren't wrong, just premature. Then again, at some point, any forecast can turn out to be right, he says. "If you take enough of a timeline, eventually we're all dead," Worth noted.