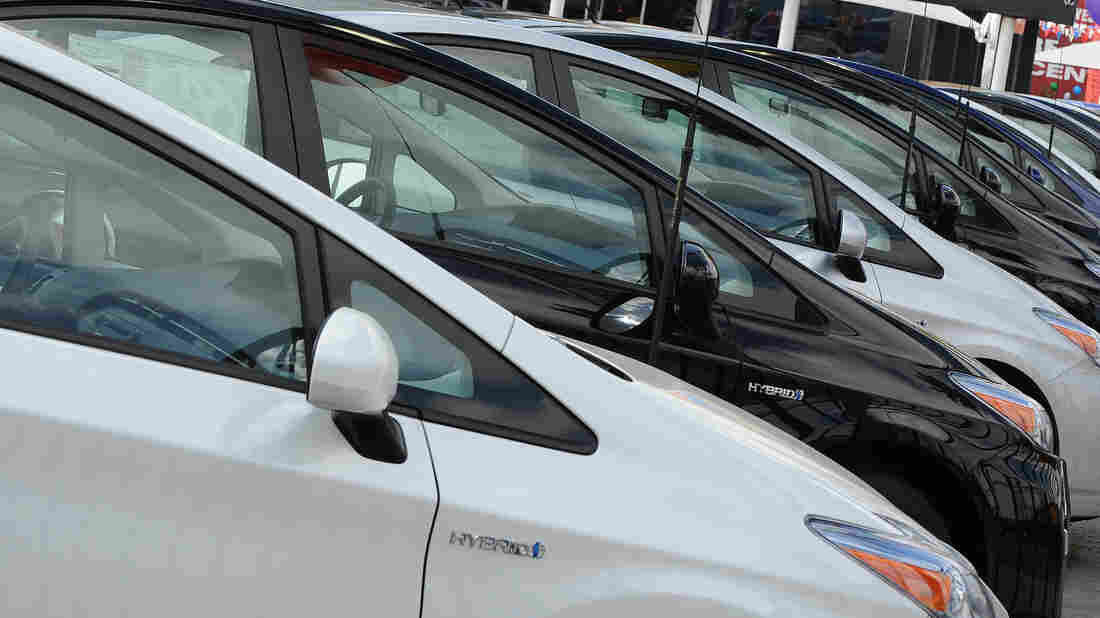 Sales of traditional hybrids, plug-ins and all-electric cars are down about 5 percent in 2014 — while truck and SUV sales have jumped. Mark Ralston/AFP/Getty Images hide caption

The recent drop in gas prices may be good for consumers, but it's not such good news for hybrid car sales.

Even before gas prices started to slide, hybrid sales were falling — all while sales of trucks, SUVs and luxury sedans have been on the rise.

That relationship between gas prices and sales is "rather remarkable," says John Krafcik, president of the website TrueCar. "During months when gas prices are low, less fuel-efficient cars tend to take a greater share of the market and vice versa. It's a fairly one-to-one relationship."

Consumers, Krafcik says, just seem to have short-term memories. "I think it's fairly interesting from a cultural memory standpoint, that American car buyers, for the most part, don't seem to have memory of gas prices two, three or six months ago," he says.

Sales of what the industry calls advanced-drive vehicles — traditional hybrids, plug-ins and all-electric cars — are down about 5 percent this year. At the same time, trucks are up by 17 percent and SUV sales have grown by 20 percent.

Traditional Cars Have A New Edge

What's interesting about those numbers is that SUVs, trucks and luxury cars are where all the profits are in the car business.

"It's probably the case that automakers as a whole right now are losing money on their hybrids," Krafcik says. "So they may not necessarily be disappointed with the changes that we're seeing right now in fuel prices, which seem to be driving some consumer behavior shifts."

If gas was $5 a gallon right now, this would be a "completely different story," says Jessica Caldwell, an analyst with Edmunds.com. "Especially if it went from $3.20 one day to $5 in a few months ... that would signify a shock," she says.

Another part of the story, Caldwell says, is that cars, trucks and SUVs, regardless of segment, are all a lot more fuel efficient overall than they once were.

"Right now, the internal combustion engine is probably the biggest competition to traditional hybrids, because the fuel efficiency has gotten so much better on those cars," she says.

A vehicle that gets 30 miles per gallon, she says, is "an improvement for a lot of consumers, and they just go with that, rather than paying the additional cost of a hybrid or a plug-in or even an electric."

Caldwell says something has changed in the mind of the American consumer. For example, pickup truck buyers, when surveyed, say fuel economy is one of their top concerns. A decade ago, that wouldn't even have made it into the top 10.

So while customers may not be running out and buying hybrids, Caldwell says, all consumers are much more concerned about fuel economy.

That mindset, she says, "is now just a given: Does it get good fuel economy? 'Cause if it doesn't then I won't even consider buying it — it has to get better fuel efficiency than the vehicle I had before."

Now we come to 800-pound gorilla of the hybrid world: the Toyota Prius. It was the first major hybrid car, likely the only profitable one, and makes up at least 25 percent of the hybrid sales.

Roland Hwang, director of the energy and transportation program at the Natural Resources Defense Council, says declining Prius sales are a large part of why hybrid sales are declining overall.

"What's going on there is that the Prius is at the end of its product cycle life," he says. "So it's getting a bit long in the tooth for the consumer market."

When Toyota comes out with a new Prius next year, Hwang says, hybrid sales are likely to pick up.

Hwang also notes that gas prices won't always be low — and unlike the last price spike, almost all carmakers now have hybrids or fuel-efficient options.

"So when the next price spikes come, when we see the surge in demand for fuel-efficient vehicles like hybrids, the auto companies won't go bankrupt like they did last time. We won't see the kind of crisis as we saw last time," he says.

Hwang says hybrid technology is here to stay — you're probably just much less likely to notice it in the future.