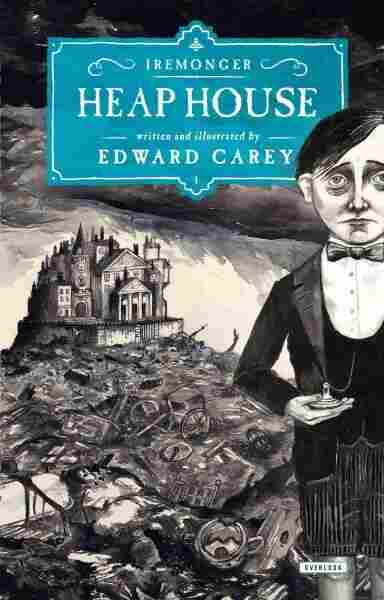 How do I even begin to talk about this exceptional, astonishing book?

I could show you the notes I made while reading: they begin with bullet points, neat and tidy, saying things like "very good voice work — distinctive, moving" and "fantastic characters, riveting perspectives" and "enamored of commas in a way I find pleasing." But as I read on, the notes devolved; they grew riddled with exclamation points, acronyms that didn't exist before the internet, wild typographical flailings that could barely accommodate those surges of fervor known colloquially in my environs as THE FEELS.

That is to say, my notes kept pace with what happens in Heap House: a world concerned with organizing minutiae grows overwhelmed by the accumulation of things, and in turn those things acquire a terrifying velocity that sends the narrative careening to its conclusion.

The year is 1875, and Clodius Iremonger is a member of a very strange family with a very strange lineage, occupying a borough of London called Forlichingham (or Filching), where they minister to the heaps. The heaps are piles of refuse and salvage that have been accumulating for decades, to the point where they have developed their own climate and a rather mercurial geography. The Iremonger family has evolved alongside these heaps in a symbiotic relationship that, over the course of the book, goes from quaint and whimsical to harrowing and bleak: each Iremonger is given an object at birth that comes to represent them, and from which it is dangerous to be parted.

In contrast to this is Lucy Pennant — a sixteen year old orphan not looking forward to being "married to the heaps," as is the lot of unfortunate children who come of age in Filching. She has just been plucked from obscurity by Clod's grandfather Umbitt Iremonger, the family patriarch, who plunges her into deeper obscurity as a servant in Heap House, the Iremonger mansion. Once there, servants give up their names, knowing each other only as "Iremonger" as they go about their duties.

The book alternates between Clod and Lucy's narrations, occasionally interrupted by documents from within Heap House — a kitchen inventory, a secret post-mortem statement. But the bulk of it is concerned with Clod and Lucy's increasing awareness of the mystery at the house's core: why do birth objects have names that only Clod can hear? Why are those names different from the Iremongers'? And who has stolen Aunt Rosamud's brass door handle?

Reading Heap House I was reminded of Edward Gorey, Lemony Snicket, and Roald Dahl; it's a grimy world with a sepia glow, a Victoriana of malicious clutter. It walks an acrobatic line between charm and startling, shockingly visceral critiques of late capitalism that made me want to stand up and shout my agreement (in a library). It's an intelligent, thoughtful, compassionate book, unflinching in its depictions of casual cruelty and systematic exploitation.

It's also gorgeously written. The cadence of the sentences just pours these characters out, and I loved the approach to language, the slanted twists to the Iremongers' names, as if their names were akin to the salvaged nature of their birth objects. "I am Lungdon born and bred, I am from Spittingfeels" says one Iremonger; the transformation of language is thoughtful and moving, and contributes greatly to the overall atmosphere. I found myself frequently wishing to see a film of this book, so cinematically did some of the scenes unfold: heart-pounding chases, a loving lingering on the details of a room never left unoccupied.

My one quibble with Heap House is that it's the first of a trilogy, which I didn't know as I hurtled headlong towards an ending that seemed to promise me closure and perfection only to do something else entirely. It's a choice I respect, even as I growl against it: it's the cleverer option, ultimately the more responsible one, opening up a natural path of enquiry that I can easily see filling another two books with a rich and invigorating exploration of this fascinating world. Nevertheless, that moment of bait-and-switch disappointment left me raging on Twitter for a half hour at the very existence of multi-volume series.

Once I recovered, however, I resolved to read everything Carey's ever written, because Heap House is, its heart of trash notwithstanding, an absolute treasure.