Accessibility links
Our Skulls Might Have Evolved To Withstand Blows To The Face Many scientists believe that a diet of nuts, seeds and other tough, brittle foods shaped our faces, but a June study in Biological Reviews suggests that violence had a heavier hand in its evolution. 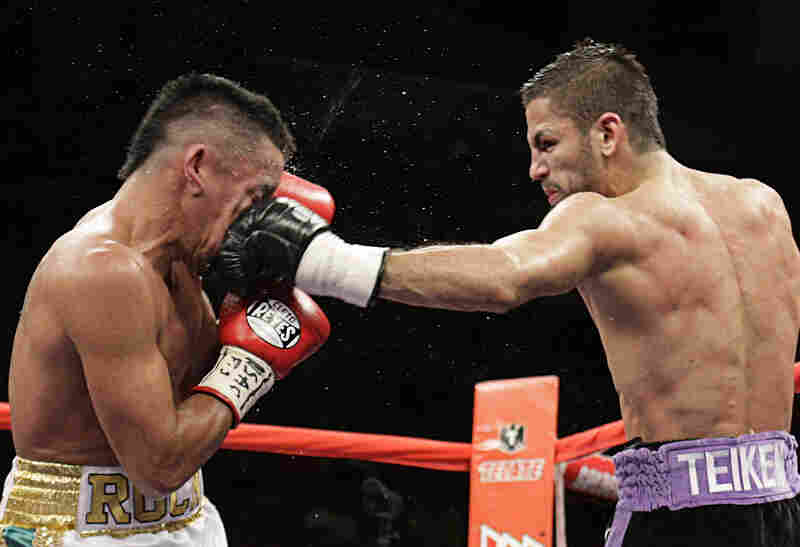 Rocky Juarez of the U.S. gets punched in the face in July 2010 by Jorge Linares of Venezuela during their WBA Fedelatin lightweight title fight in Las Vegas. Some researchers believe the human face evolved to take punches — without, of course, the boxing gloves. Steve Marcus/Reuters/Corbis hide caption 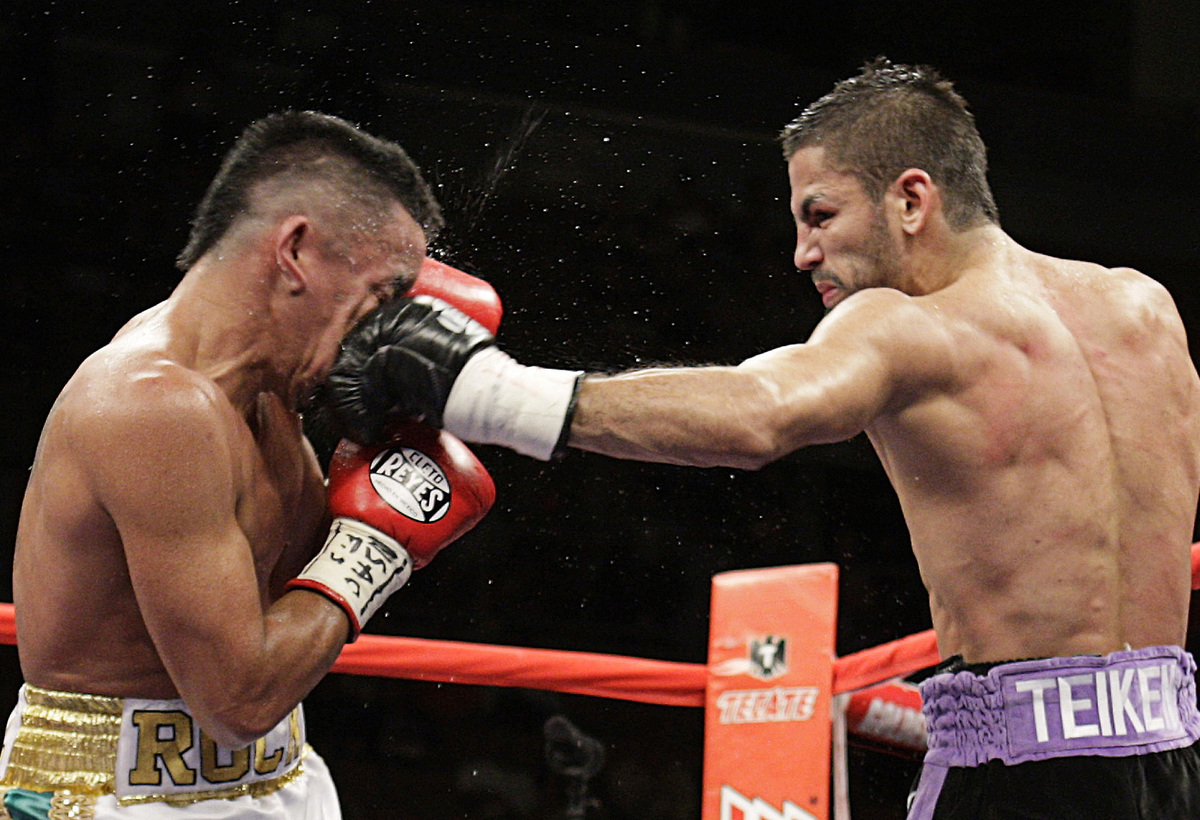 Rocky Juarez of the U.S. gets punched in the face in July 2010 by Jorge Linares of Venezuela during their WBA Fedelatin lightweight title fight in Las Vegas. Some researchers believe the human face evolved to take punches — without, of course, the boxing gloves.

Prehistoric life really might have been nasty, brutish and short.

Although many scientists believe that a diet of nuts, seeds and other tough, brittle foods shaped our faces, a June study in Biological Reviews suggests that violence had a heavier hand in its evolution.

"We suggest that many of the facial features that characterize early hominins" — such as a protruding jaw and thick brow ridge — "evolved to protect the face from injury during fighting with fists," wrote the study authors, biologist David Carrier and physician Michael Morgan, both from the University of Utah.

Carrier and Morgan compared earlier studies' measurements of the skulls of apes to those of our australopith ancestors — who roamed Africa 2 million to 4 million years ago — and those of modern humans. The duo found the largest increases in sturdiness in parts of the skull that fracture most often in fights among modern humans, according to studies of assault and domestic violence injuries — namely the nose, brow bone, jaws and cheekbone.

Turns out that these regions also show the starkest size differences between males and females in both australopiths and humans. One possible explanation is that males, more likely to fight and suffer slugs to the face, needed more protective features. The hypothesis that these regions grew denser in response to diet doesn't explain the sexual differences, the researchers say; modern-day male and female apes eat pretty much the same food.

The new findings build on Carrier and Morgan's 2013 study, which suggested that early human hands evolved square proportions and flexible thumbs not only to provide more dexterity for climbing down from the treetops, but also to pummel rivals in fights over territory, mates and other resources.

"If the human fist is a dangerous weapon, it is reasonable to predict that the primary target, specifically the head, would have undergone evolution resulting in increased robusticity and protective buttressing," they wrote.

But the 2013 study was controversial. Science writer Brian Switek pointed out in a National Geographic blog post that the study investigated the fist-clenching abilities of our own species, Homo sapiens, not the australopiths examined in the more recent study; it's possible that australopiths couldn't ball their hands into fists. Plus, the new paper cites modern-day injury data to draw conclusions about the fighting behavior of australopiths.

"They couldn't provide any evidence that punching was a preferred or even common mode of fighting in the past," Switek wrote. He added that they didn't examine for signs of injury to prehistoric skulls or attempt to model how they might withstand punching.

But Carrier responded in a comment on Switek's post that "very few" fossils of the australopith face exist, and although he hopes to model their response to oncoming fists, "without modeling we can be confident of the direction of the effect on bone strain and susceptibility to fracture that increased facial robusticity must have," he said. "It is not necessary to know what the basic effect is." He told the BBC that modern human anatomy can help us gauge the role violence played in our ancestors' evolution.

Carrier and Morgan think it was a major role, and next will examine the foot posture of great apes with combat in mind. Both hope that their work will help researchers better understand our own violent tendencies.

"Peace begins with ourselves and is ultimately achieved through disciplined self-analysis and an understanding of where we've come from," Morgan said in a statement. Embracing the better angels of our nature might mean staring into the bone-ridged eyes of our possibly brutal ancestors.

Melissa Pandika is a lab rat-turned-journalist with eye to all things science, medicine and more. You can follow her @mmpandika.