Accessibility links
Six Words: 'Must We Forget Our Confederate Ancestors?' The Confederate flag is a sign of bigotry to some. For others, says reporter Jesse Dukes, it symbolizes family heritage and defiance — but also what he calls a "willful innocence" about U.S. history. 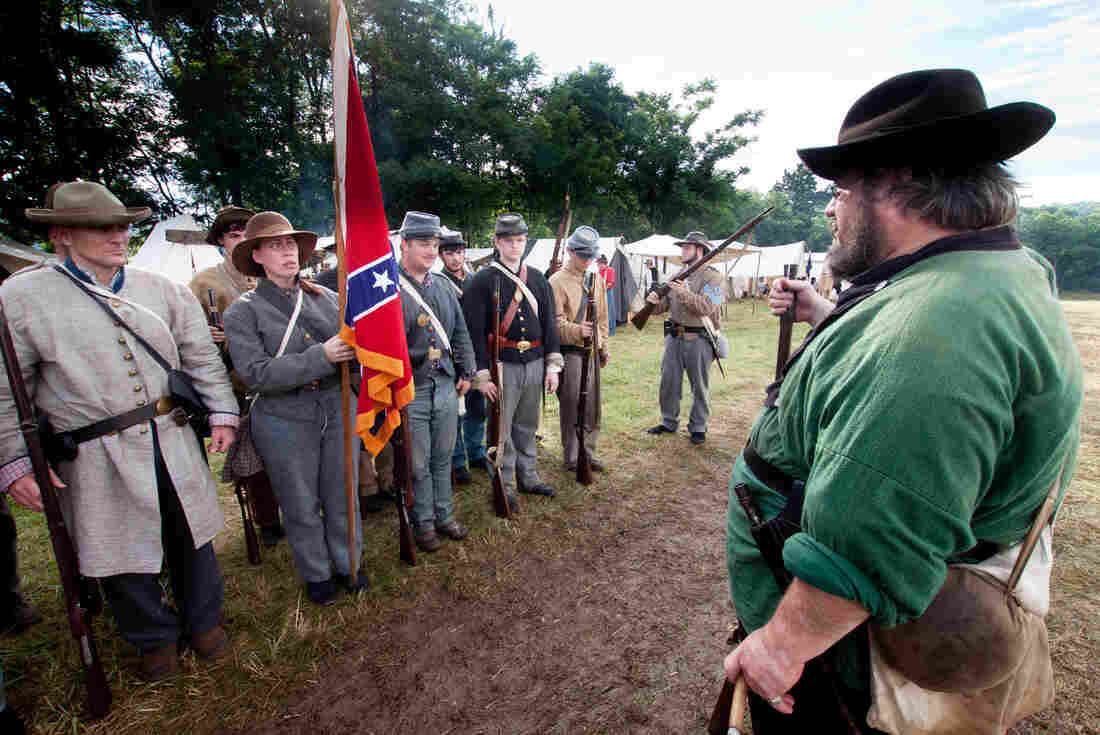 Waverly Adcock, a sergeant and founder of the West Augusta Guard, prepares his company for inspection and battle at a Civil War re-enactment in Virginia. Sara Smith, whose great-great-grandfather was wounded at the Battle of Gettysburg, holds the Confederate battle flag. Courtesy of Jesse Dukes hide caption 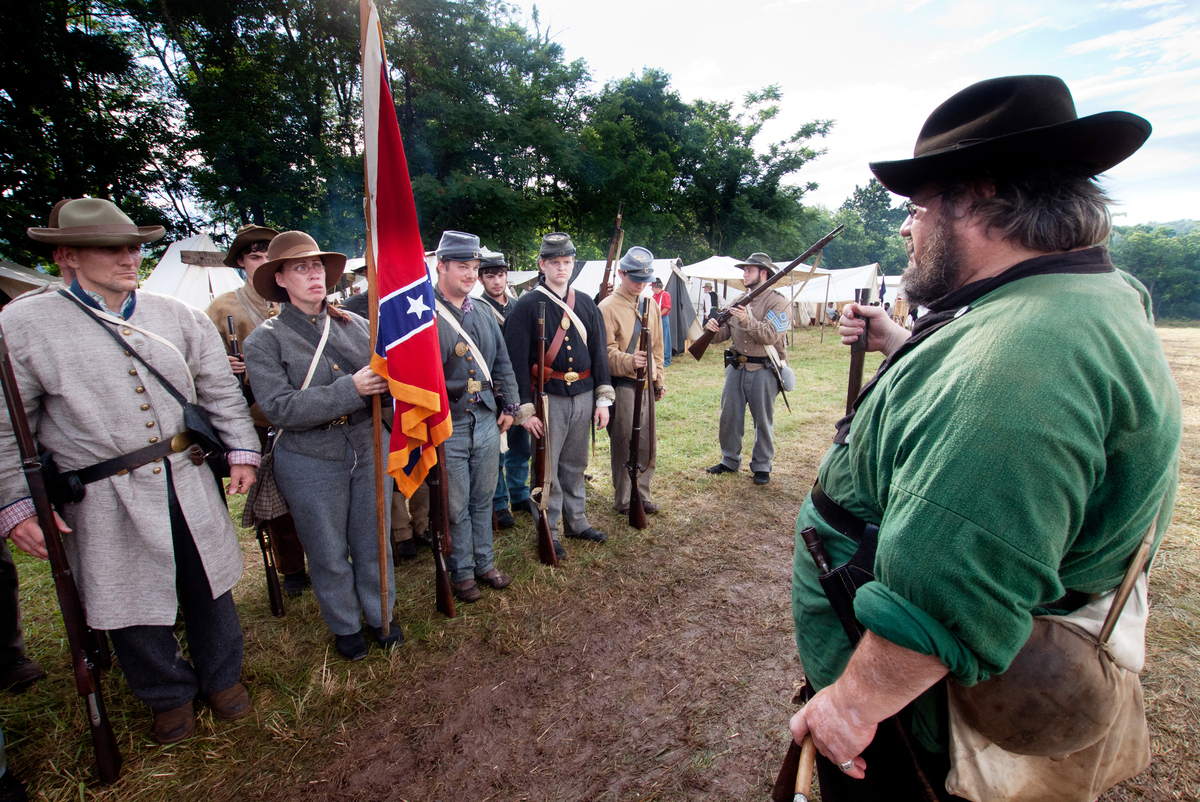 Waverly Adcock, a sergeant and founder of the West Augusta Guard, prepares his company for inspection and battle at a Civil War re-enactment in Virginia. Sara Smith, whose great-great-grandfather was wounded at the Battle of Gettysburg, holds the Confederate battle flag.

NPR continues a series of conversations from The Race Card Project, where thousands of people have submitted their thoughts on race and cultural identity in six words.

Jesse Dukes does not have Confederate ancestors. But in the time he has spent writing about Civil War re-enactors, he has met many who say they do.

Their perspectives on the Confederate flag and the legacy of their ancestors prompted Dukes, a writer and radio reporter, to share his own six words with the Race Card Project: "Must We Forget Our Confederate Ancestors?"

Dukes, a Southerner himself, embedded last year with a group of Civil War re-enactors at the 150th anniversary of the Battle of Gettysburg, and wrote about it in a piece for the Virginia Quarterly Review.

"I just wanted to see the spectacle of the thing," he tells NPR Special Correspondent Michele Norris. The event, a re-enactment of one of the Civil War's most famous battles, "was going to be like the Woodstock of re-enacting, is what everyone told me. ... I wanted to sort of understand what they got out of it."

As it turned out, the people he met weren't particularly comfortable talking about those themes, Dukes says. But they did talk when prompted, and "everybody was kind and everybody was very welcoming," he notes.

Many Confederate re-enactors understand, Dukes says, that the Confederate flag is associated with segregation, the KKK and lynchings. "And invariably people would say, you know, racism was so terrible. It was an abomination. ... But that's not what I'm here to connect with,' " Dukes says.

'A History, Not A Hate, Issue'

Instead, the re-enactors were there to connect with their ancestors, he says. "Maybe not run up that exact same hill, but a simulacrum of that hill with the same sounds and the same shouts and the same visual stimulus — minus the blood and dying. And it still seemed to define their identity."

"I think people tried to distance their ancestors from the guilt associated with slavery, and I also think they tried to implicate everybody else," Dukes says. "So, pointing out, very accurately, that slavery — the economic system — relied on the markets and the textile factories and places like that in the North."

While reporting, Dukes met Sara Smith, a Confederate re-enactor from Dayton, Va. Her great-great-grandfather, Harry N. Smith, fought for the Confederacy at Gettysburg and was wounded in battle.

Sara Smith has Confederate flag stickers on the back of her truck — and says those who see it as a symbol glorifying racism or segregation don't understand the meaning the flag holds for her.

"I think people need to realize ... it's a history, not a hate, issue," Smith told Dukes. "I think too many people get caught up in the symbol. You know, for us, it doesn't mean the same thing it means to other people. The flag that they get so upset over, was actually not a flag. It was a battle flag. It was what you formed off of to know you were on the right side" in battle.

Several people have written about the Confederacy, the Confederate flag and Southern identity in their submissions to The Race Card project. Follow the links below to see some of those contributions.

And "if her great-great-grandfather was a good, noble, brave person who was wounded and then came home, and still lived to be something like 80, and showed so much bravery on the field, and he could carry that flag, why would it be wrong for her to put it on her vehicle?"

Dukes describes that perspective as "willful innocence." It's a logic "that says, 'OK, I have the right to love my great-great-grandfather and to admire those things in his life that are admirable, like bravery, like loyalty, like accomplishments, like survival. And because he must have been a good person, then the cause he fought for and the flag that he held must not have been a bad cause.' "

Dukes says that perspective led some of the re-enactors to make the following assertion: "People who are offended by [the flag] just don't understand what the Confederate flag really means."

The Confederate flag holds different significance for other Americans, as well, Dukes says. While some Southerners are well aware that the flag is often perceived as racist — and display it anyway — others display it to demonstrate their mistrust in federal government and as a symbol of resistance to federal regulation.

And for others, Dukes says, the Confederate flag signifies an awareness that rural white Southerners, and rural Americans more generally, are often stereotyped as backward.

"I think the flag has transcended Southern identity to become [linked to] a kind of rural impoverished identity, too," says Dukes, who says he has even seen people display the Confederate flag in rural Maine.

"I think there are poor people in the rural South and North and all over the country who do feel like they're stereotyped and they don't have everything ... including respect ... that's due to them.

"I'm not sure that waving a Confederate flag is a great way to get that respect back — and often it is enacting the stereotype that they're trying to escape — but I do think it's a legitimate complaint nevertheless."

Dukes says he enjoyed meeting re-enactors like Smith, and doesn't "begrudge them their weekends clad in gray, remembering their ancestors, hoisting libations and waving the battle flag," he writes in Virginia Quarterly Review.

But, Dukes writes, "better to roll the flag up at the end of the weekend and leave it in the trunk until the next re-enactment. This is the 21st century, and the Confederate flag has no place in our time."