Accessibility links
Review: 'War Dogs' By Greg Bear Greg Bear's latest space adventure goes from the Earth to Mars and back again with a grizzled group of "Skyrines" (Sky Marines, get it?) on the trail of a mysterious alien treasure. 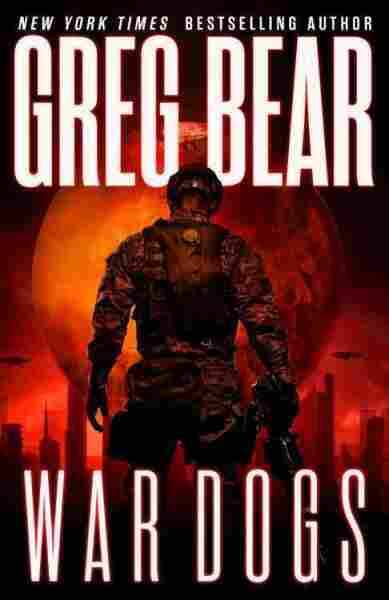 First things first: You remember that movie from a while back called Three Kings? It was a David O. Russell picture about Gulf War soldiers who find a map that leads them to a treasure, which they then have to smuggle out of Iraq in the middle of a war.

If you missed Three Kings, think Kelly's Heroes. Same deal. These movies are of a type (grunts find treasure) and of a style (war stories where the war is just a backdrop), and Greg Bear's newest novel, War Dogs, is itself very much of that type and style. It is full of grunts. The grunts are at war. The grunts find treasure. The grunts have to get it home. Straight-up pulp adventure, elegant and simple.

Inasmuch as Three Kings told a story of America's first postmodern war — informed by war movies, fought by self-aware and trope-referencing ironic warriors — War Dogs spins a tale of post-human war. It tells a story within a story of a future Earth visited by wise and ancient aliens. They come bearing gifts of miraculous new technologies, which they agree to give to us in exchange for equitable international sharing (which is nice), global politeness (uh ... OK), and a promise that humans will stop using the F-word (which is just plain F'ed up).

Oh, and one more thing? If humanity would also be so kind as to raise up a massive army to go off and fight the nice aliens' mortal enemies who are currently chilling out on the surface of Mars and hungrily eyeballing Earth, that would be awesome, too. Great. Love ya. Thanks.

Humans being humans, we agree to this obviously ridiculous and totally not-a-trap-at-all request, train up a bunch of "Skyrines" (Marines in space — like, from the sky — get it?) and hurl them out across the "vac" until they eventually land "on the red" or "in the dust" — on Mars, which is where the majority of War Dogs is set.

Though Bear has a nice handle on the particular slang and linguistic rhythm of soldiers in the field, he also has a recurring problem with his grunts trying to make pop-culture references — because that's what oh-so-postmodern grunts do, right? They're all so self-aware! The problem is, he runs into the Star Trek Conundrum: Do you have your characters make reference to nonexistent pop-culture to give a sense of cultural continuity? Like Captain Kirk comparing Klingon poetry to Shakespeare, to Faulkner and to Blammo Squidface's epic space haiku? Or do you do what Bear does — reference only existing culture, and make all your characters sound like dated squares who haven't left the military base since MC Hammer was a thing? Tough choices, even for a Skyrine.

But the best (and by far the largest) part of War Dogs is the action on Mars, which Bear handles with a scientist's precision and an eye for alien detail. His Mars is barren, desolate and merciless. It's a place where any mistake will murder you instantly, and the landscape itself will murder you slow.

This is a war story written the way most war stories aren't — one where the enemy is almost never seen and where the main character, Master Sgt. Michael Venn doesn't even fire his weapon until the final 20 pages of the story. Still, I honestly lost count of the number of times Venn nearly died in the first hundred pages. Death by falling, by hypoxia, by freezing to death, by running out of air or water, by choking on your body's own poisons or touching something you shouldn't.

Eventually, a few of the surviving grunts make their way to a strange outcropping of rock — a Drifter — in the middle of the Martian hardpan. This, of course, is where the treasure will be. Because the reveal of what it is, how it got there and who wants to do what with it comes on as a nice, slow burn throughout the back two-thirds of the novel, I won't spoil it here.

Instead, I'll just say this: Though you'll feel confused at times, stick with it. Though you'll find yourself as lost as the Skyrines, muddled up in a stew of politics, military expediency and alien desires, soldier through.

In the Greg Bear universe of novels, War Dogs is more Eon or Hull Zero Three than Blood Music — a hard and grounded story less concerned with the fate of universes and realities than it is with one or two or a dozen men living to see tomorrow. And Bear, as a writer, seems almost more at home on the deadly flats of Mars and in the memory-haunted chambers of the eastern Drifter than he does back on planet Earth. So, too, does Master Sgt. Venn. Both of them have secrets they're keeping for the very last pages.

And it's worth making the round-trip flight from Earth to Mars and back again to hear them finally told.