Accessibility links
Book Review: 'Season Of The Witch,' By Peter Bebergal Rock 'n' roll rebellion is mainstream today, but Peter Bebergal's new book summons a more shadowed past, when artists like Black Sabbath and Led Zeppelin brought an occult mystique to the music. 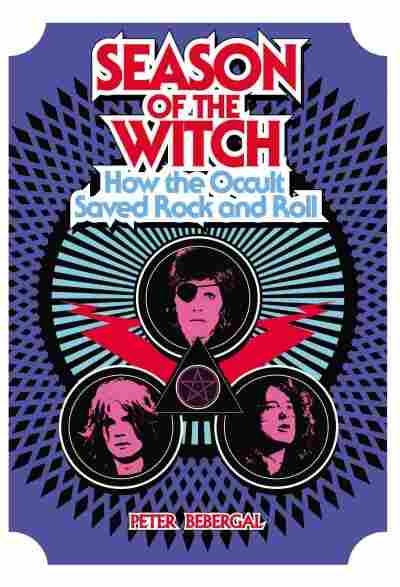 Season of the Witch

How the Occult Saved Rock and Roll

Rock 'n' roll was built on rebellion, but too often today, that's about as deep as the conversation goes — especially now that rock is so completely woven into the mainstream, it's hard to imagine a time when it wasn't pop-culture wallpaper.

Peter Bebergal, however, remembers. In his new book, Season of the Witch: How the Occult Saved Rock and Roll, he summons the long shadows of rock's past, when bands like Black Sabbath and Led Zeppelin as well as solo artists like David Bowie and Donovan — whose 1966 "Season of the Witch" gives the book its name — brought the hypnotic mystique of the occult to rock music.

Bebergal has been here before. His 2011 memoir, Too Much to Dream: A Psychedelic American Boyhood, touched on many of the same topics as Season of the Witch. But unlike Too Much to Dream, Season of the Witch mostly avoids personal reminiscence. Instead, Bebergal packs a mini-memoir into the book's introduction, recalling a '70s boyhood entranced by his older brother's Beatles, Led Zeppelin, Pink Floyd and Black Sabbath LPs.

They were more than pieces of music to Bebergal: The dizzyingly detailed cover of Sgt. Pepper's Lonely Hearts Club Band held secrets to be plumbed, and the words that were etched into the runoff groove of Led Zeppelin III — "Do what thou wilt," a quote from the infamous mystic Aleister Crowley, whose face also appears on the cover of Sgt. Pepper — were like an incantation.

Bebergal's fascination with rock's link to the occult wound up being part of a larger curiosity that led him to theology. He studied religion at Harvard Divinity School; accordingly, there's a strong academic tone to Season of the Witch. The book reaches as far back as Greek mythology, and it's broad enough to encompass the native gods of Haiti, the art of Aubrey Beardsley and the philosophy of Aldous Huxley. Its tone is just as authoritative, but here's where Bebergal excels: Rather than turning in either a fanboyish rhapsody or a scholarly dissertation, he treads the line between those approaches. The result is passionate, informed, gripping and at times wonderfully lyrical.

Bebergal also acknowledges that he's working with a volatile topic. The occult doesn't have a positive connotation for everyone, and while Season of the Witch isn't trying to court moral watchdogs or fundamentalists, it firmly draws the line between practicing a marginalized belief like Satanism and viewing it as a manifestation of humanity's eternal quest to find meaning in the unknown.

It's the difference, as Bebergal himself points out, between myth and metaphysics. He leans strongly toward the former, and he does his musical heroes great credit by never assuming that the music of Bowie, The Rolling Stones or Jay Z — despite an occasional dip into occult ideas and imagery — was ever meant to be gospel.

If there's one drawback to Season of the Witch, it's the book's brevity. Weighing in at around 200 pages, it feels like it could be twice as long and still come nowhere near exhausting either its subject or its reader. In that brief amount of space, Bebergal manages to explore the tangents of cinema, comic books, literature, anthropology, role-playing games, television and even toys.

Yet he leaves so much out: The book almost begs for an analysis of Johnny Rotten's battle cry "I am an Antichrist!" from the Sex Pistols' "Anarchy in the U.K." There are thousands more possibilities — and that's where Bebergal's selectivity becomes as much of a strength as a weakness. Rather than attempting to throw as many examples at his audience as he can, he focuses on those that best illustrate his point: that the occult, like rock 'n' roll itself, can be illuminating as well as spellbinding.