Accessibility links
First Listen: Bob Dylan, 'The Basement Tapes Complete: The Bootleg Series Vol. 11' Sample 12 selections from an ambitious six-disc box set of archival Dylan recordings. The recordings capture and reflect one of the most vivid chapters in American music. 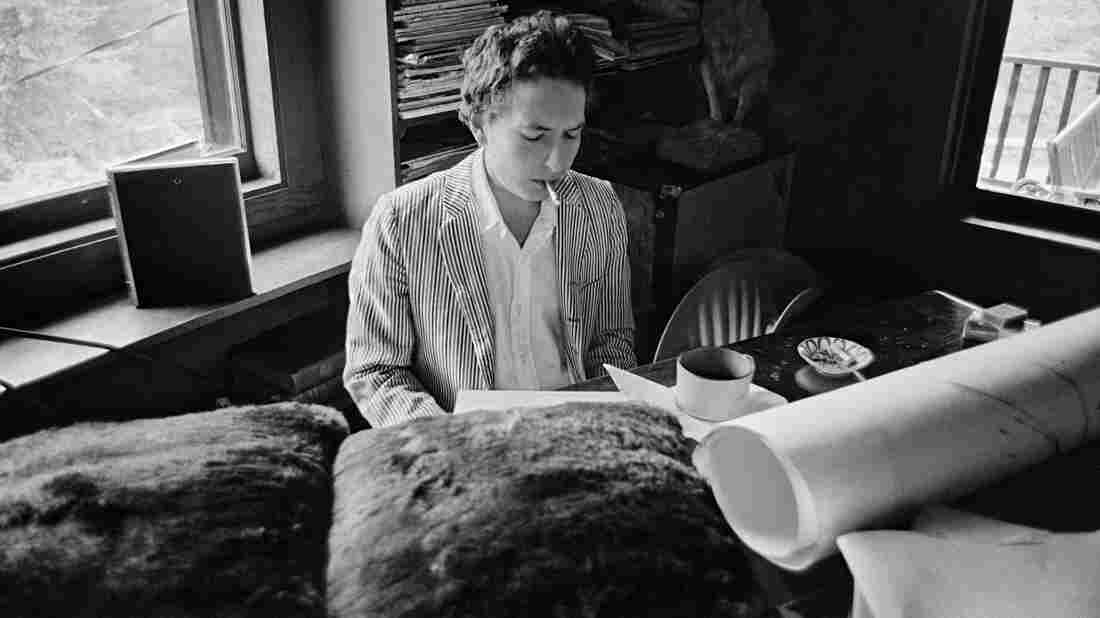 The Basement Tapes Complete: The Bootleg Series Vol. 11, a compilation of unearthed recordings by Bob Dylan, comes out Nov. 4. Elliott Landy/Courtesy of the artist hide caption 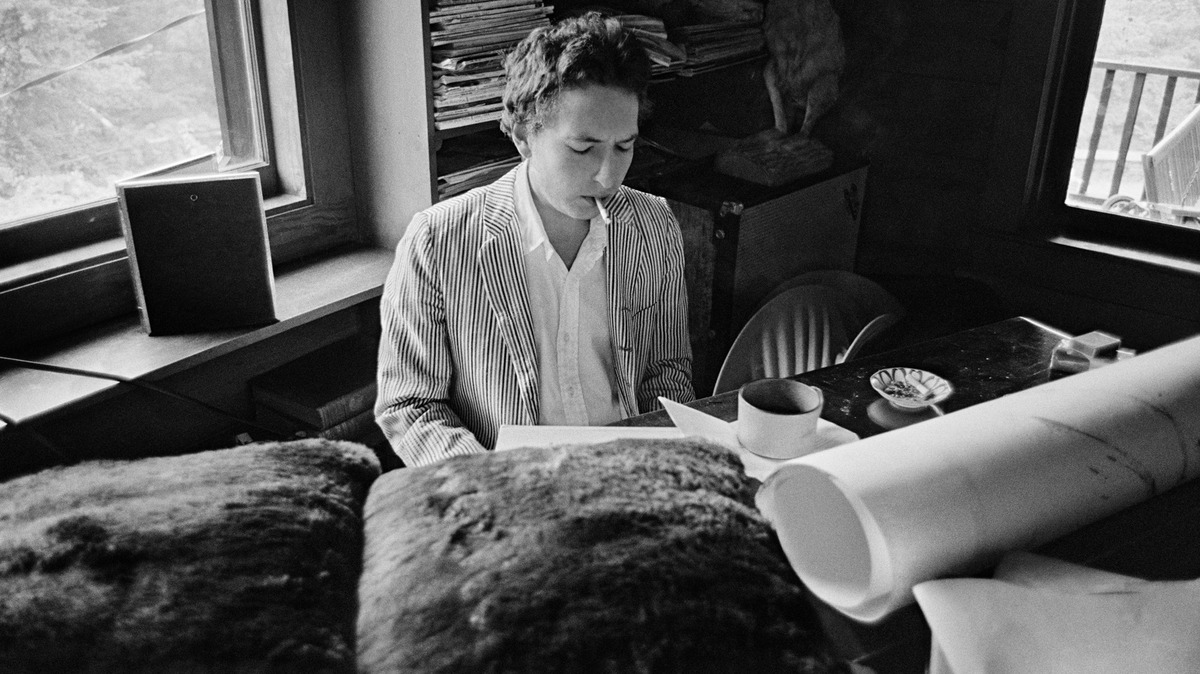 The Basement Tapes Complete: The Bootleg Series Vol. 11, a compilation of unearthed recordings by Bob Dylan, comes out Nov. 4.

Elliott Landy/Courtesy of the artist

The dog's name was Hamlet.

He lived at the house known as Big Pink, in the woods near Woodstock, and during the summer of 1967, responsibility for his care was shared by Bob Dylan and members of The Band. Hamlet was on the scene during the fruitful recording of The Basement Tapes, part of the storied atmosphere that led to one of the most vivid chapters in American music.

You might remember the multi-instrumentalist and singer Garth Hudson recalling those sessions and referencing Hamlet in The Last Waltz: "Chopping wood and hitting your thumb with a hammer, fixing the tape recorder or the screen door, wandering off into the woods with Hamlet ... it was relaxed and low-key, which was something we hadn't enjoyed since we were children."

Later, Bob Dylan looked back on that period in an interview with Rolling Stone editor Jann Wenner, he touched on similar themes. "That's really the way to do a recording: in a peaceful, relaxed setting. In somebody's basement. With the windows open ... and a dog lying on the floor."

Hamlet was that dog, and he's about the only Big Pink denizen not fully accounted for on the six-disc The Basement Tapes Complete: The Bootleg Series Vol. 11. There's no What The Dog Saw essay, and aside from a cutout image of the photograph used in the original 1975 release, there are no photographs of him in the lavish folio — which is sized to emulate reel-to-reel tape boxes of the era and contains other great images, including one of Dylan, in flip flops, taking out the trash.

Given what we know about dog energy and its effect on humans, it's reasonable to conclude that Hamlet's presence contributed in some small way to the wonderfully settled, easygoing feeling of these recordings. Perhaps he deserves some formal credit, because in a sense, that feeling — redolent of the rhythms of daily domestic life, the palpable atmosphere of a home in the woods — is the central story of The Basement Tapes. It's key to the whole endeavor, possibly more striking than the line-by-line genius of the songs themselves.

Listening to the mother lode in its entirety, from the gems to the false starts, jokey throwaways and talkback chatter, the first and most prominent impression is this unpressurized, almost familial working environment. You can't escape the vibe in the room — everybody's loose and open to ideas, especially preposterous ones, and the rhythms are serene, rustic, relaxed. Nobody's rushing to make a meeting. Nobody's thinking of going anywhere; the remote location could be a zillion miles from the commercial world, and these people like it that way. Their mission is not to "make a record" the way Dylan's peers were doing in 1967, but instead to explore music, using just their wits and whatever instruments were lying around. And to have fun doing it.

Arranged in rough chronological order based on the numbering system used by The Band's Garth Hudson (who served as the engineer), this version of The Basement Tapes presents the material from the 1975 release in its original state, without overdubs. It's best appreciated not as a collection of songs, but as a kind of audio documentary, a painstaking account of the daily song-chasing that went on for nearly seven months at Dylan's house and then Big Pink. It catches Dylan in a fertile writing period, and offers telling glimpses into his process — his use of absurd placeholder words ("You Ain't Goin' Nowhere") and nonsense syllables that would eventually become lyrics in subsequent versions. At the same time, it shows how resourceful his collaborators were as they cobbled together, often on the fly, a rustic and rarified textural landscape that could complement and enhance his images.

By all accounts, very little premeditation was involved: Hudson once noted that they were doing anywhere from seven to 15 songs in a day. Dylan worked constantly on lyrics, banging them out on an Olivetti typewriter sometimes right before tape rolled. He'd bring a page downstairs, and in a matter of minutes, a song would take shape. Not just any song, either: These sessions yielded "I Shall Be Released," "Tears Of Rage (co-written with Richard Manuel), "Quinn The Eskimo," "Northern Claim," "This Wheel's On Fire" (co-written with Rick Danko) and others. (And that's not all: A trove of unused Dylan lyrics from that time provides the backbone of the T-Bone Burnett-produced The New Basement Tapes, which features Elvis Costello and others, and will be released Nov. 11.)

Recorded during a period of seclusion after Dylan's 1966 motorcycle accident, The Basement Tapes present the already-iconic figure as he intentionally departs from the confrontational invective and tightly wound wordplay of the triumphs in his recent past — among them the single "Like A Rolling Stone" and the album Blonde On Blonde. Driven by what sounds like a desire to simplify his art, he begins by diving deeply into traditional American gospel ("My Bucket's Got A Hole In It") and modern offshoots (a tremendous version of Curtis Mayfield's "People Get Ready"), folk ("Po'Lazurus") and country (Johnny Cash's "Big River" and "Folsom Prison Blues"). The Band's Robbie Robertson has said that during this early phase, Dylan was "educating" his collaborators on folk and other styles they'd only recently encountered; they'd been primarily an R&B band before the Dylan tour. From there, Dylan wrote at a torrid clip, generating simple ballads, allegorical blues and story songs. These follow the general outlines of the covers; they eschew fancy language in favor of blunt declarations, and are built on the crisp, regular cadences of the blues. Though they're not exactly heavy treatises, Dylan does at times venture into heavy topics — like the nature of goodness, salvation and the meaning of existence, themes he tackled more directly on his next album, John Wesley Harding.

Underpinning all the songs, even the ridiculous ad-libbed riffs that were likely never intended for public consumption, is Dylan's pronounced irreverence: When he's leering at a young girl in "I'm Your Teenage Prayer," he sounds nothing like the anointed voice of his generation, or some bard or oracle with special powers. Instead, he's just another mysterious traveler who's shaking off his old mode of communication and out to search for new ones. The atmosphere in The Band's communal house helped this along, because here Dylan was just another eccentric, and thus part of whatever evolving joke was in progress. The crew carried the bantering right into the recordings: Dylan obsessives have long theorized about the mood during the delirious "See You Later Allen Ginsberg" and others, as well as the non-linear riffs in the early renderings of "You Ain't Goin' Nowhere." One verse begins with, "Look here, you bunch of basement noise, you ain't no punching bag." A few lines later, he exhorts said basement noise to "pick up your nose."

Through it all, The Band's members somehow retained the composure necessary to keep the grooves chugging along. These musicians were perfect foils for Dylan, as well as masters of coloristic accompaniment. Their ginger, intuitive support is more remarkable when you consider that they were feeling their way through the unknown. They had little guidance from Dylan in terms of how the tunes would evolve, yet they didn't just stick to the job of supplying pretty chords behind Dylan's words. They chased after the feeling behind the words: They looked beyond language for the sonic "aura," and over and over again they used the smallest soloistic gestures and the most beautifully strident vocal harmonies to magnify it.

Often, when labels release an expanded version of a landmark album, the new version is heralded with hype about the unique "magic" of the creation. In some cases, there's reason to be skeptical. With The Basement Tapes Complete, it takes about two minutes to determine whether there was any real mojo going on. Cue up "I Shall Be Released" and focus on the intertwined voices. It's just the guys, and they're sounding weary, like it's time for a break. The organ is faint and almost invisible in the background, as it somberly outlines a church-like processional. Nothing flashy is going on. At the refrain, they assemble into a kind of ramshackle chorale and aim skyward, surging and lifting up in parallel to the melody like a Sunday-school choir — except these harmonies have some hurt in them, and desperation, too. These voices are long-shot candidates for redemption, but as they knit themselves into formation, the weirdest thing happens. The mass of ragged voices acquires an eerie angelic glow — an exact sonic parallel to the words. Magic basement noise, all the way live. And it couldn't have happened any other way.