Accessibility links
As Downtown LA Grows, So Does Urgency To Fix Skid Row In Los Angeles, more than a thousand people sleep on the street in cardboard boxes and tents — just a mile away from City Hall. Many want to fix Skid Row, but how to do it is extremely controversial. 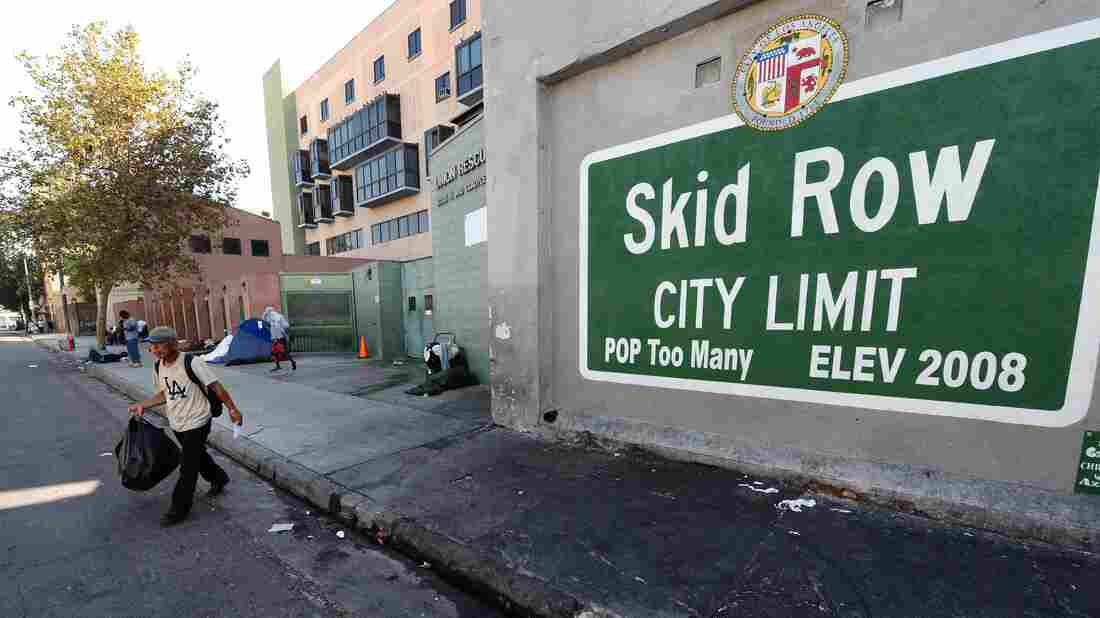 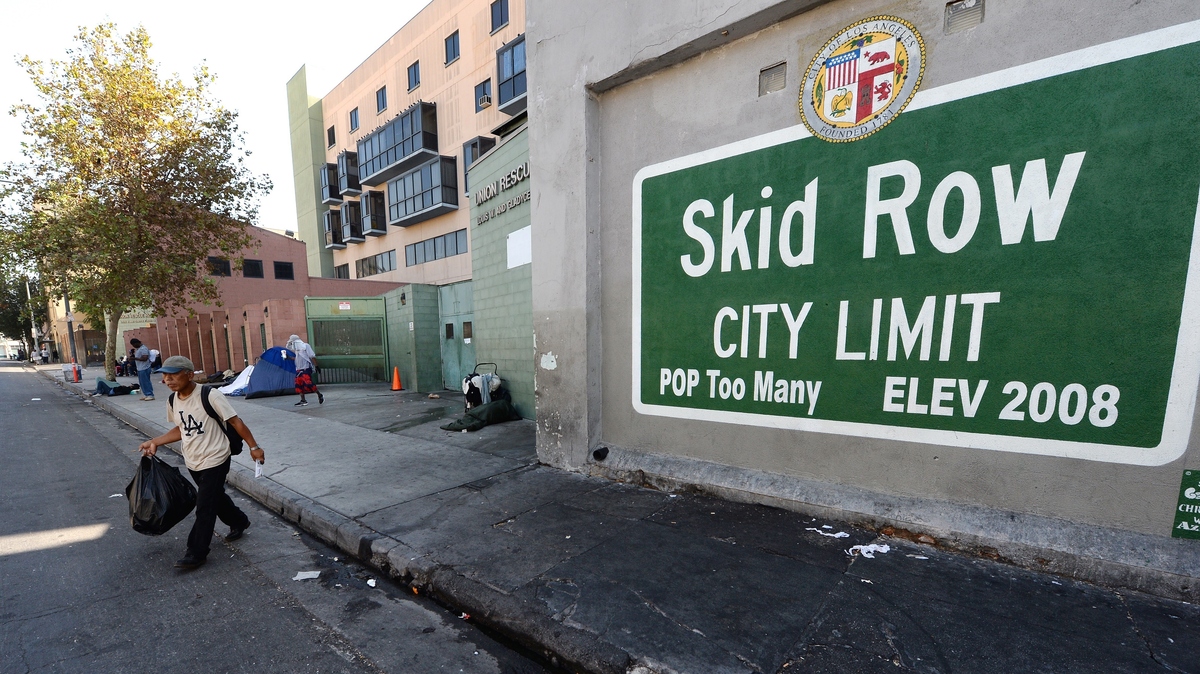 Los Angeles' Skid Row contains one of the largest concentrations of homeless people in the United States.

In Los Angeles, more than a thousand people sleep on the street in cardboard boxes and tents — just a mile away from City Hall.

This is Skid Row, and compared to the affluent downtown areas that practically surround it, the area is like a different planet. Fifty blocks of sidewalk are jammed with people who live on the street, with all of their worldly possessions crammed into shopping carts and crates.

In the hot midday Southern California sun, the place stinks of urine, human excrement and garbage. Last year, there was a major outbreak of tuberculosis.

A sense of shame is really motivating people to finally address this issue ...

A lot of people want to fix Skid Row, but how it's done is extremely controversial. And as downtown Los Angeles develops, it's a problem that's become more and more urgent.

Leah, who didn't want to give her last name, sells cigarettes along Skid Row. She says she has seen some changes lately.

"The cops are starting to crack down more, I guess 'cause they want to clean up down here to make it better for people to live," she says. "But this is Skid Row; it's always going to be Skid Row."

But a lot of people — including some with very deep pockets — disagree.

At a recent discussion last month about the future of Skid Row, developer Tom Gilmore said people need to deal with the fact that downtown is going to continue to develop.

He said development doesn't mean reducing services for the homeless, but some disagree; they believe that development will simply force out the people who live on Skid Row. Longtime activists say there is a real danger that growth in the area will simply ignore the needs of the thousands living in poverty.

But new residents and businesses say they want to play a role in improving Skid Row.

Besten says the homeless people on Skid Row used to be easier for the city to ignore, but with more people moving downtown, that's changing.

"A sense of shame is really motivating people now to finally address this issue, because it's so apparent in the streets everywhere you look," Besten says.

On a recent morning, the lobby of the Union Rescue Mission is packed. The shelter has been working on Skid Row for decades.

It feels like a cross between an apartment building and a secure court facility. It provides shelter for about 800 people, split among private rooms and dorms.

It also provides substance abuse counseling and other services. It's a Christian charity, though non-Christians and nonbelievers are welcome here. Shelters like Union Rescue Mission continue to fill up with people in need.

"What I describe Skid Row as is the biggest man-made disaster in the United States," says the Rev. Andy Bales, who runs the shelter and has worked on Skid Row for almost 10 years.

Bales says things had been improving on Skid Row, but they've taken a bad turn since the recession. He says hospitals from the region, and even other states, have been dumping homeless patients on Skid Row illegally, and that jails are releasing inmates without enough preparation. Resources have also been reduced for shelters in favor of other approaches.

Bales says fear had once left Skid Row — but now it's back.

"[There's] violence every day; across the street there's crack cocaine sales," he says. "And by the self-cleaning restroom on the corner down here, they're selling heroin. Take that times 49 blocks: That's what Skid Row is."

Bales says the answer for this is decentralizing services, and that ideally people should receive treatment and help in their own communities. But he says it can be difficult to convince neighborhoods to accept new homeless shelters, affordable housing or treatment facilities.

"We are often market-driven instead of compassion-driven," he says. "Of course we need investors, we need all of that, but we need compassionate people who care about the people [who] are potentially displaced. We need to make sure there's a place for them to go and that place is not just on the sidewalk or a bush in another neighborhood."

Another source of shelter for some of Los Angeles' chronically homeless had its grand opening earlier this month: Star Apartments on Skid Row. The building, developed by the nonprofit Skid Row Housing Trust, is beautiful, modern and bright. There are more than 100 apartments where the homeless can stay permanently, turn their lives around and get easy access to a health clinic and other services on-site.

Jude Burns is one of the residents at Star Apartments. He is only 44 years old but uses a cane that he says helps him walk through the pain in his spine and feet.

"Sometimes it's so bad, I can't even get out of bed," Burns says. "But then I have good days and bad days. Today's one of the good days."

Burns moved in about a year ago. He and the other residents were allowed to settle in before the recent grand opening. But he didn't always need this type of help.

Burns moved to LA a few years back to be closer to his 14-year-old son. He had been diagnosed with diabetes, but he says he had it under control. Then on New Year's Eve 2011, his son was shot and killed in South LA, an apparently random murder. It sent Burns into a deep depression.

"After my son's death, my health just started going completely downhill," he says.

The diabetes got worse; he got pancreatitis, and then came the complications. He needed two surgeries. For a while he bounced around between the couches of friends and hospitals.

"I would say I was in the emergency room at least once every two months," he says.

After one of his surgeries, his luck changed. A hospital social worker linked Burns up with temporary housing through Lamp Community on Skid Row, and they told him about Star Apartments.

"Now I got my own place, and my own keys. And man, I'm happy about that. Thankful," he says.

Burns says it was the first time in three years he had his own stove, his own refrigerator and his own bathroom. And most importantly, Burns doesn't have to drag himself to the emergency room to see a doctor or a social worker because there are case workers on-site downstairs, alongside a health clinic that's opening with staff doctors and nurses.

"Everything is right here," Burns says.

This model of ending homelessness is called "permanent supportive housing." The idea is that the best way to tackle homelessness, as well as handle all the chronic health and mental health problems, is to get people housed first and then work on the other issues — issues that can seem extremely challenging.

"Many people would consider the folks that we're housing unhousable," says Marc Trotz, who runs LA County's Housing for Health program. "They're too sick, they're too disruptive, they're too drug-addicted. And our philosophy is to just flip that around."

Trotz's program is helping run Star Apartments and has actually moved staff inside the building. He says that they know that a home doesn't miraculously cure mental illness or long-term substance abuse issues, but that it's almost impossible to address those issues when someone is homeless.

He calls Skid Row a "health disaster zone," where the population is stuck in a cycle that revolves from the street to hospitals, jails, maybe treatment centers or shelters — and then back to the street.

"[You] can do that for five, 10, 15 years and just steadily decline in health and die, essentially," he says.

Trotz and the county want to break that cycle by creating buildings like Star Apartments throughout Los Angeles County. According to Trotz, they've created 700 units in the county so far, with a goal of 10,000 by 2018.

Dennis Culhane, a professor of social policy at the University of Pennsylvania, says experience has shown that permanent supportive housing works.

"The research is very robust. It shows that about 85 percent of the people who are placed in this housing remain there one year later," Culhane says. "Even among the people who exit, many of them are exiting to other planned arrangements. Only a few percentage is actually returning to homelessness."

Culhane says these programs frequently save governments money, too, by reducing ER visits and time in jail.

But Star Apartments resident Jude Burns has one word for his unit: "A blessing."