Accessibility links
'Slow Regard' Is A Riddle, Wrapped In A Mystery, Living In An Underground Tunnel Patrick Rothfuss' new novella is a dreamy flight of fantasy that follows a secondary character in his vast Kingkiller Chronicle: Auri, a quiet young woman living in a sprawling, secret tunnel network.

'Slow Regard' Is A Riddle, Wrapped In A Mystery, Living In An Underground Tunnel

'Slow Regard' Is A Riddle, Wrapped In A Mystery, Living In An Underground Tunnel 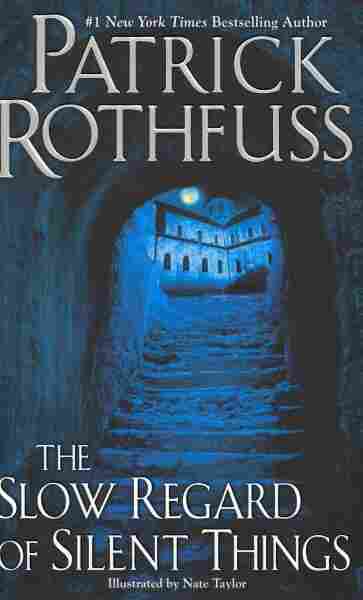 The Slow Regard of Silent Things

Title
The Slow Regard of Silent Things
Author
Patrick Rothfuss

In the foreword to his new novella The Slow Regard of Silent Things, Patrick Rothfuss gives the reader a warning: "If you haven't read my other books, you don't want to start here." The other books he's referring to are The Name of the Wind and The Wise Man's Fear, the first two installments of his bestselling fantasy series The Kingkiller Chronicle.

Rothfuss, though, is only half right. True to his word, Slow Regard simply does not work as an introduction to the world of Kingkiller. (Kvothe, the series' magic-prodigy-turned-innkeeper protagonist, doesn't even appear.) However, as a standalone tale — one that actually requires zero foreknowledge of the world it's set in — it's a dreamy, touching flight of fantasy.

Slow Regard is the story — or at least a story — of Auri. One of the most compelling, scene-stealing secondary characters in Kingkiller, Auri is a semi-feral young woman whose past is a mystery, and Slow Regard doesn't attempt to diminish that. She lives alone in a secret, sprawling network of tunnels she calls the Underthing, which lies beneath the University, the academy of magic that her friend Kvothe attends.

Kvothe's absence looms in the background here, but the show belongs entirely to Auri. In fact, she's the only character in the entire book. Even more striking, there's not a word of dialogue. Told from a third-person perspective, Auri's tale is as simple as it is sweetly quiet: She's searching the Underthing for a gift for someone who's going to visit her in seven days. That's pretty much it.

Auri's quest is utterly non-earthshaking, but there's an urgency to it that propels the bare-boned plot. Auri's priorities are not those of normal people, and as her search culminates in tiny epiphanies — not to mention a long, anticlimactic scene where she lovingly makes soap as if it were an alchemical ritual — her character takes on a magical aura all her own. Magic is a central element in the Kingkiller books, and there are clues to Auri's past that seem to point toward some great power, either bottled up or lost. Slow Regard, though, isn't concerned with solving the cipher that is Auri, only with giving her room to bloom.

And bloom she does, weirdly and wonderfully. Skittish and sensitive, she has a tendency to see everything around her as alive, if not outright personified. Pipes laugh. Walls leer. Her own lungs become angry with her. Sometimes her affectations come off as twee — for instance, she kisses the inanimate objects she finds in her quest as if they were woodland creatures — but that preciousness is offset by Rothfuss' restrained yet graceful prose.

Rothfuss, to his credit, also allows himself to bloom. Kingkiller may be a page-turner (which it needs to be, seeing as how the first two books combined are already nearing the 2,000-page mark), but it's a dense read, packed with dozens of characters and quick, witty banter. But as Rothfuss points out during Auri's quest, "Some things can't be rushed" — and that includes the book itself, which lingers beautifully on detail, texture, and atmosphere, strengths that aren't as evident in Kingkiller.

Despite that, Slow Regard doesn't forget where it comes from. Auri's meandering through the Underthing may seem relatively aimless, but it fills in some of the gaps left by the surface-centric narrative of Kingkiller. And one of the series' main themes — the power of names — insinuates its way into Slow Regard both subtly and powerfully by book's end. It complements Kingkiller, yet it works its own magic free and clear of it.

Slow Regard isn't the first novella set in the Kingkiller world that's appeared this year. A long story featuring the character Bast was published this summer in the anthology Rogues, edited by George R. R. Martin and Gardner Dozois. Slow Regard is the better of the two, and it wholly warrants the full-book treatment, despite the fact that Rothfuss openly doubts this in his self-effacing foreword. If his doubt is a preemptive defense against readers who might be thrown off by the book's distinct, low-key voice, it's not necessary. Slow Regard is its own defense, a charming, lyrical meditation on the meaning of home: how we define it, how we carry it with us, and how we deal with the lure and fear of what lies beyond.

Whether or not it's intentional, the book's title is a sly hint about how to approach the story within: gently and without hurry, as if approaching Auri herself.