Accessibility links
The Next Shirt You Buy May Say 'Made In Ethiopia.' Here's Why The garment industry is still seen as a good partner for jump-starting the economies of undeveloped nations. Manufacturers entering these countries say they're trying to treat workers more ethically.

The Next Shirt You Buy May Say 'Made In Ethiopia.' Here's Why

The Next Shirt You Buy May Say 'Made In Ethiopia.' Here's Why 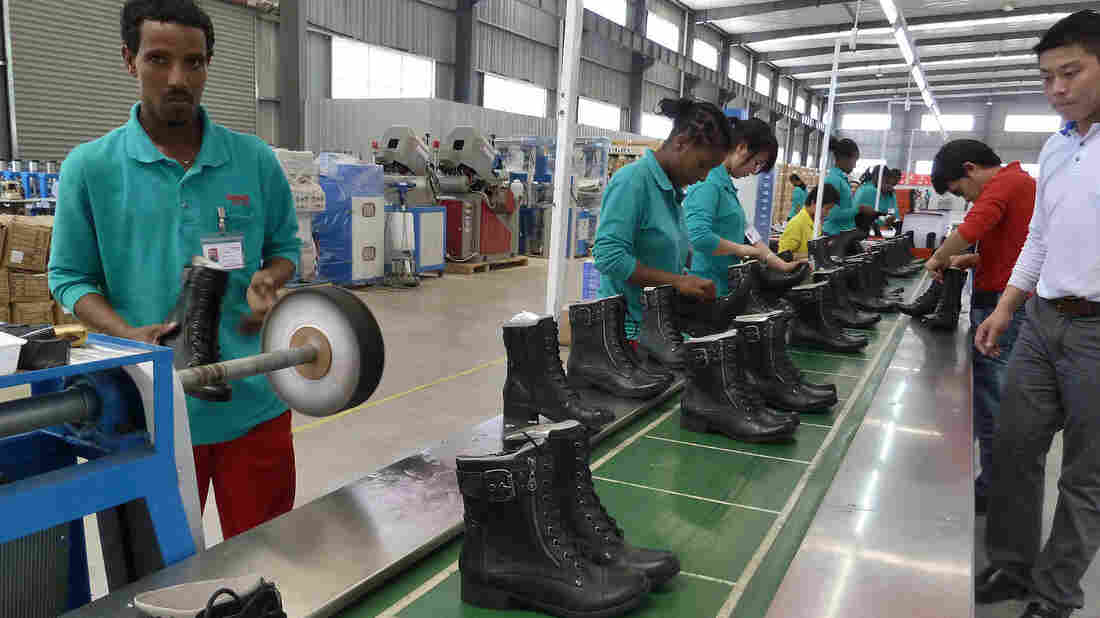 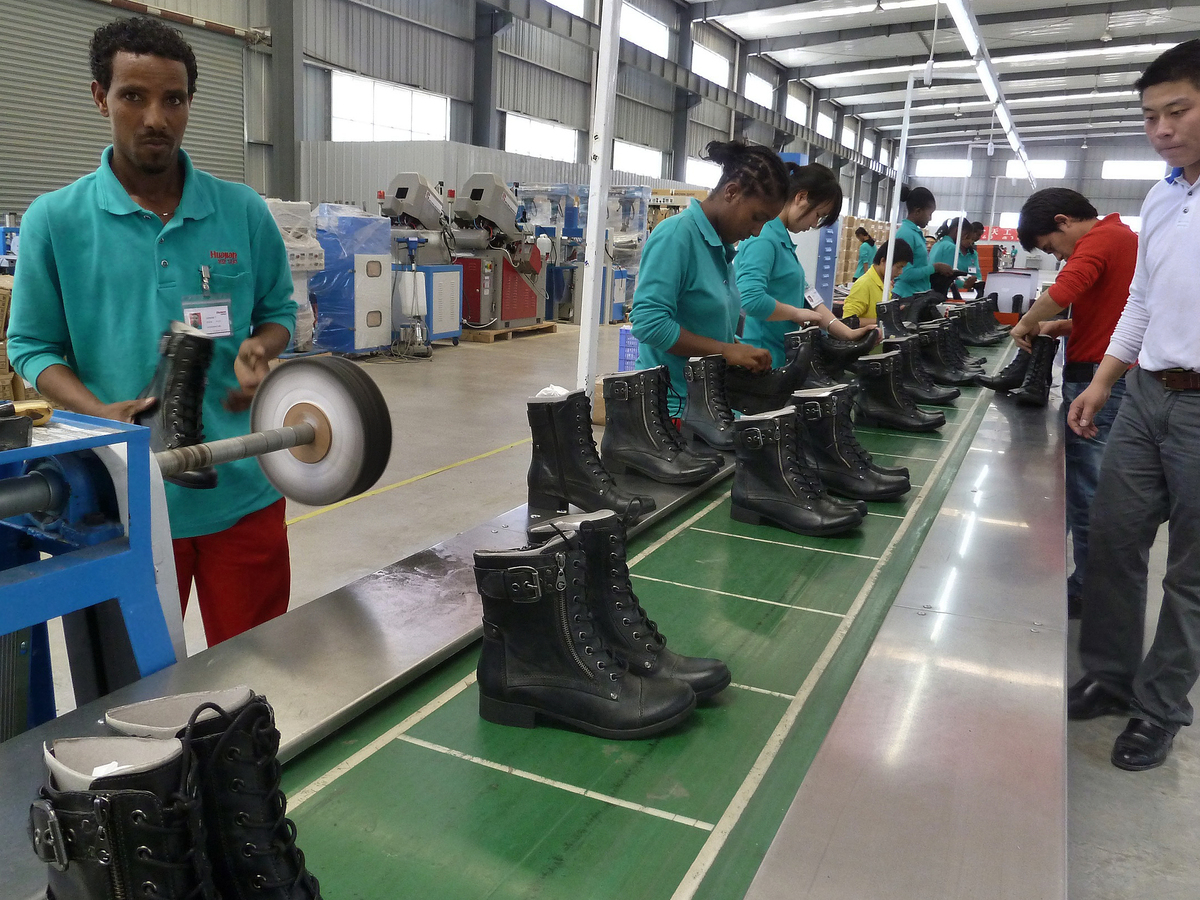 People working on the assembly line in April 2012 at Huajian shoe factory in Dukem, Ethiopia.

"Made in China" may be leaving your wardrobe.

As labor costs in the "world's factory" continue to rise dramatically, global fashion brands are looking elsewhere to source apparel. In addition to established hubs like Bangladesh and Vietnam, the garment game is ripe for new players: Myanmar (Burma), Haiti and Ethiopia, among others, are looking to rejuvenate a once-thriving trade or even build one entirely from scratch.

China will shed approximately 85 million manufacturing jobs in the coming years, which some development experts say could be a golden opportunity for producing economic development, a la South Korea. The standard narrative: Start at the bottom with low-skill, basic textile manufacturing (like T-shirts) and work your way up to more complex garments (like suits), then to more complex goods like electronics.

Improved quality of life and a rising consumer class will naturally follow, creating sustainable and natural growth in China. At that point, garment assembly would be seen as lowbrow.

"You don't make tanks out of textiles," says Derek Scissors, a scholar at the American Enterprise Institute.

Nixon And Kimchi: How The Garment Industry Came To Bangladesh

Possible To Have Both Fashion And Fairness?

Possible To Have Both Fashion And Fairness?

But whether China's successors actually can follow the "textile to tank" model is a point of serious contention. Some argue that new entrants only can survive by offering the lowest costs — read: unlivable wages and minimal, if any, rights. Footloose garment brands — apt to flee to wherever labor costs are lowest — make nurturing textiles into an industry with highly skilled workers, robust infrastructure and effective regulation extremely difficult.

It's harder to unlearn bad habits, so the best shot at a sustainable industry may be Ethiopia, which is essentially a blank slate. Despite dire infrastructure shortcomings, Ethiopia's access to a continental market with six of the 10 fastest-growing economies and one of the world's largest cattle (leather) stocks spurs "China 30 years ago" comparisons and makes the nation an attractive long-term investment.

The Chinese and Turkish certainly seem to think so. Huajian Shoes and Akya Tekstil, two of the world's largest apparel-makers, are planning multibillion-dollar "apparel-cities" fit for up to 60,000 workers and 50 different manufacturers each.

H&M, the Swedish apparel giant, has staked an early claim in Ethiopia as well. By partnering with nonprofit Swedfund, it's championing a "responsible" way forward with three new sustainable factories, and more planned. The move by an early entrant to set an ethical foundation in a country mirrors the work of Gap in Myanmar, also known as Burma, this past June.

Once called an "outpost of tyranny" because of its brutal military dictatorship, Myanmar underwent vast democratic reforms in 2011; stifling economic sanctions from the West were eased a year later. Now the country's garment industry is on track to bring in $1.7 billion of export revenue in 2014 — compared with $900 million in 2012.

By partnering with USAID and local nongovernmental organizations in Myanmar, Gap is trying to avoid the plunder-and-bail reputation of the garment industry.

"We want to lend resources in such an important time for the country," to set a precedence of humane working conditions and work with the government to build institutions to protect best practices, said Debbie Mesloh, Gap's senior director of government and public affairs.

"The idea that a brand would move into a country to make the world a better place is absurd," he says. "They do it because it's cheaper."

Indeed, according to the country's own manufacturers association, Myanmarese workers make as little as $30 per month, below the World Bank's $1.25/day poverty threshold. And early reports show Ethiopian garment workers earn between $37 and $53 per month.

Those figures will make those garment workers the world's lowest-paid, behind Bangladeshi workers, who earn approximately $68 a month.

Those data are irrefutable, but some experts argue that such low wages — once a characteristic of all now-developed economies, most recently Taiwan, South Korea and Hong Kong — are a necessary initial sacrifice to attract investors. And if job seekers voluntarily choose to work for low wages in a factory, that means it's the best of a series of bad options, says Benjamin Powell, director of the Free Market Institute at Texas Tech University.

"If we were to impose laws on these countries mandating higher pay and [better] working conditions, it would take away the very reason companies chose to come there, thus leaving [the workers] trapped in an even worse poverty," he said.

In Haiti, where 80 to 90 percent of the exports are apparel, there's some hope for development with labor standards. Conditions in Haiti have improved significantly, argues Arianna Rossi, research and policy officer at Better Work, an arm of the International Labour Organization that specializes in the garment industry. The minimum wage was raised in May of this year to $5 a day, and Better Work's most recent report shows factories are complying almost across the board; 37 percent of workers are even receiving at least $6.75.

To be sure, the garment industry hasn't proved the jobs creator for Haiti that it was touted to be. A two-year-old industrial park in northern Haiti, Caracol, financed to the tune of $124 million by the U.S., has led to only 3,000 jobs, instead of the projected 60,000. That's despite duty-free access to the United States via the HOPE II trade agreement and serious promotion from the State Department, former Secretary of State Hillary Clinton and former President Bill Clinton.

Still, companies are coming to the realization that "treating workers better is good for business," Rossi says, citing a Better Work research project as proof of concept.

Advocates like Nova aren't sold. For one, if the garment industry was a way out of poverty, wages shouldn't have declined for the past decade across the world or, on average, be just a third of a what's considered a "living wage."

Whether the garment industry is good for national and individual economic development or not, countries like Haiti, Myanmar and Ethiopia are rolling out the red carpet for fashion's name brands. Whether they'll have buyers' remorse remains to be seen.