Accessibility links
Book Review: 'The Peripheral' by William Gibson The master of cyberpunk returns to form with a new novel set in his old stomping grounds — the near future. Reviewer Jason Sheehan says it sings with controlled, dark energy and effortless grace. 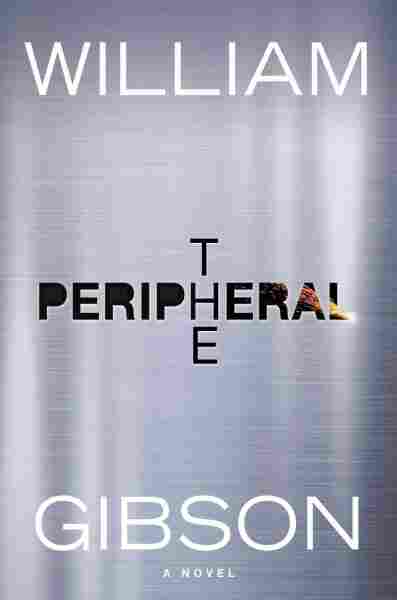 There was a time when William Gibson was the man. When, if you were talking about science fiction, you couldn't have a conversation that didn't invoke his name. When, to readers of certain tastes and a certain (reasonably innocent) age, his futures were the ones that got woven into our DNA.

Like Asimov or Heinlein or Bradbury once did, his vision carved the scope of our progress, and the big box of Crayolas in his head gave shading and color to a coming time that seemed tantalizingly close. Granted, he wore those black and chrome and rain-colored crayons down to a goddamn nub, but we didn't care. Of course the future was going to be filled with mirrorshades and black leather jackets and the film of blood on a wet razor. Why? Because William Gibson said it would be.

And now he's back. And I don't mean just with a new book, but back to his old stomping ground (the near future, though London and Appalachia this time, not California and Japan). Back to his old tricks: From page one, The Peripheral ticks and sings with the same controlled, dark energy and effortless grace of language.

It's the good stuff. The classic stuff. Digging into The Peripheral is a little like a sneak trip to the past, remembering that first, sweet shock of the new. Like wandering into some spectral record shop and discovering an undiscovered pre-first-album Ramones demo bright with all that antique rage and pain and anarchic joy. Right from the start, I wanted to climb inside of it and never come out.

None of this is to say that we're dealing with those original, prescient visions of street tech, the web and hacker culture that Gibson pioneered thirty years ago. It's a vision thing, the similarities. A return visit to the mind that made our now. The Peripheral is a wholly new and wholly original story of colliding worlds and accidental, hacked-together time travel. It's a split narrative, following, in one branch, Flynne Fisher through a near-future rural America and, in the other, Wilf Netherton in a future-future London.

Wilf's world is mysterious, full of extrapolated tech (wearable, implanted, assembler-based and sticky), rented bodies called "peripherals," and has been de-populated by an event called "the jackpot."

Flynne's world is our world, just a little bit further down the line. One where there are no jobs that don't involve drug manufacture or working at the local Walmart-analog, and where distant wars have filled the hollers with broken young veterans, like her brother Burton and most of his friends. They make their nickels on the fringes of things — doing illegal 3D printing, playing video games for money, scamming the VA. They take care of their mothers and their brothers, tear around the country roads and drink beers.

Digging into 'The Peripheral' is a little like ... wandering into some spectral record shop and discovering an undiscovered pre-first-album Ramones demo bright with all that antique rage and pain and anarchic joy.

In an odd bit of triple-vision frisson, Flynne's world is also a little bit the world where Gibson grew up — in the Carolinas and Virginia of the 1950s — and there are moments there that feel almost like propositional autobiography: This is what my world would've been had I been born a hundred years later...

In short, jumpy chapters, Gibson links the two futures. Flynne (who's done some time as a combat scout in first-person shooters for rich men too busy or lazy to play their own games) takes a shift from her brother, thinking she's beta-testing a new video game. In it, she witnesses a gruesome murder that seems somehow too real.

In London, Wilf witnesses what he thinks is a different murder, committed by one of his celebrity clients — one that costs him his career as a publicist. And shortly after, his client's sister is also murdered — the event which Flynne witnessed because the folks in future-London have kinda-sorta accidentally discovered a way to transmit data back and forth through time, and Flynne hadn't been playing a game at all, but was actually doing something ... else. In the future. In London. Because, really, what is perception but data? What is money but data? What is any experience but data which, with enough power and enough skill, can be manipulated by those who might profit from it?

To say anything more would spoil too much. Honestly, I've probably already said too much, so forget it all immediately and just trust me. The Peripheral rewards those who suck in a deep breath and just dive deep — knowing nothing, expecting nothing.

Like the best of Gibson's early, groundbreaking work, it offers up the same kind of chewy, tactile future that you can taste and smell and feel on your skin; that you believe, immediately, like some impossible documentary, because the thing that Gibson has always been best at is offering up futures haunted by the past.

Meaning, of course, haunted by our present. Like his characters, he deals in continua now — in worlds affected by other worlds and history as an arrow sculpted and directed by forces beyond the small comprehensions of those forced to live it.

Read an excerpt of The Peripheral