Accessibility links
Interview: Cornel West, Author Of 'Black Prophetic Fire' African-American philosopher Cornel West's new book laments the decline of "prophetic" black leadership, lifting up examples of people who were willing to risk their lives in the service of the truth. 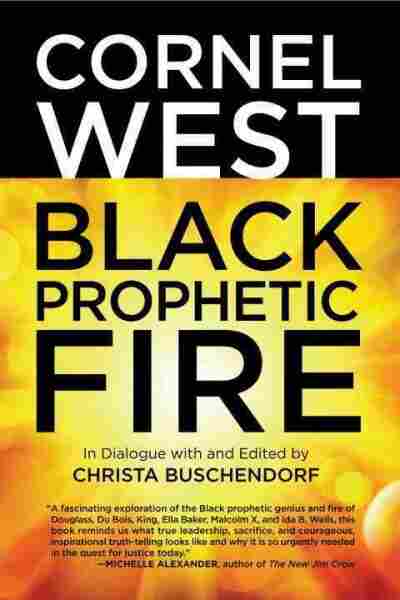 by Cornel West and Christa Buschendorf

In a new book, African-American philosopher Cornel West tries to look unblinkingly at the power of what he calls "black prophetic fire": Six African-American leaders whom he believes have enlivened America, even as their messages have often been blunted, ignored, or, almost worse, he says — "deodorized."

The leaders West lifts up are Frederick Douglass, W.E.B. DuBois, Martin Luther King, Jr., Ella Baker, Malcom X and Ida B. Wells. West tells NPR's Scott Simon that there are leaders — and then there are prophets.

"A leader is somebody who has to jump in the middle of the fray and be prudential, we hope, rather than opportunistic," he says. "But a prophetic person tells the truth, exposes lies, bears witness and then, usually, is pushed to the margins or shot dead."

Well, you know, brother Martin Luther King, Jr., he was an exemplary figure when it comes to prophetic fire. We like to freeze him in 1963; we like to think that, somehow, he would not engage what seemed to be un-American critique when he said, "My government is the biggest conveyor of violence in the world."

Malcolm X was motivated by a very, very deep love of a hated people. His commitment to black people was so intense that it scared many black people themselves ... I think we need Malcolm's spirit, even in 2014, with the Fergusons, and with the massive unemployment, the soul murder that takes place too often in our inner city schools and, of course, the greed at the top.

On Ida B. Wells

She looked American terrorism in the face. She looked lynching in the face. She was run out of Tennessee — bounty on her head — and then went to England. She was willing to speak truths at the cost of life. And, you see, Du Bois, at the time, Booker T. Washington, at the time, they did not want to speak as candidly — and ended up not speaking as courageously as Ida B. Wells-Barnett. That's why I conclude, in many ways, she is the most courageous in the sense of looking that terror in the face and being willing to be crushed by it.

On bringing back "black prophetic fire"

I was just so down and out, feeling as if maybe we were experiencing the relative death of black prophetic fire in the age of Obama — what I call the re-negrization of the black professional class, where everybody's looking at black professionals for success. But, in many ways, they are as fearful, intimidated, afraid vis-a-vis their careers and, therefore, they don't want to tell the truth; they don't want to serve and sacrifice and take a risk. But I wanted to tell them to just lay bare the tradition.

Lo and behold, here goes a great tradition of a people who have been hated and despised, but still loved — a people who were deceived, but still wanted to be honest as Du Bois, as Douglas, as Ida B. Wells, as Ella Baker, as Martin and Malcolm. Not perfect, but exemplary figures of integrity, honesty and decency; and therefore, an example for all of us, regardless of color, sexual orientation or nation.