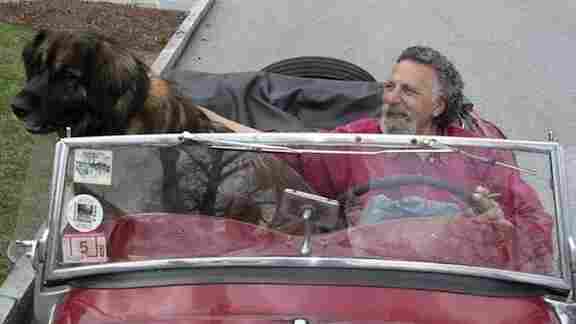 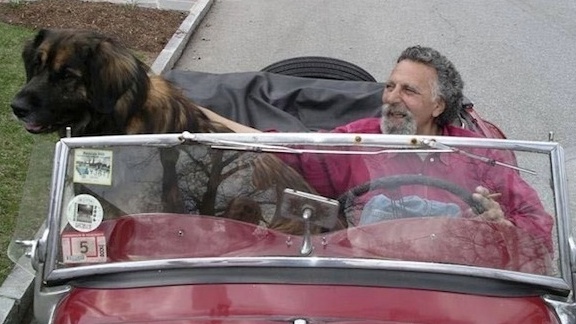 Tom Magliozzi's laugh boomed in NPR listeners' ears every week as he and his brother, Ray, bantered on Car Talk.

Tom Magliozzi, one of public radio's most popular personalities, died on Monday of complications from Alzheimer's disease. He was 77 years old.

Tom and his brother, Ray, became famous as "Click and Clack the Tappet Brothers" on the weekly NPR show Car Talk. They bantered, told jokes, laughed and sometimes even gave pretty good advice to listeners who called in with their car troubles.

If there was one thing that defined Tom Magliozzi, it was his laugh. It was loud, it was constant, it was infectious. 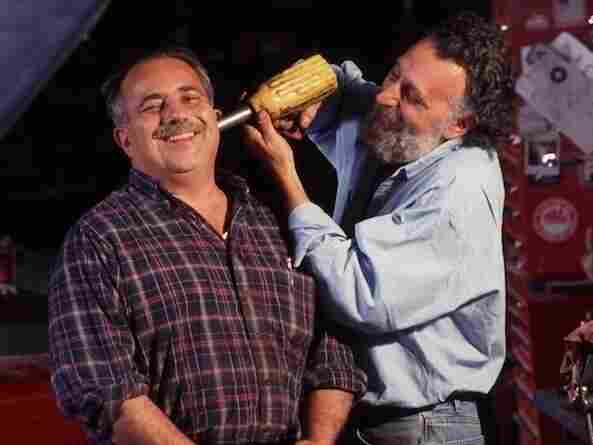 Tom (right) and Ray grew up great friends despite a 12-year gap between them. Both graduated from MIT before going into the car repair business. Courtesy of Car Talk hide caption 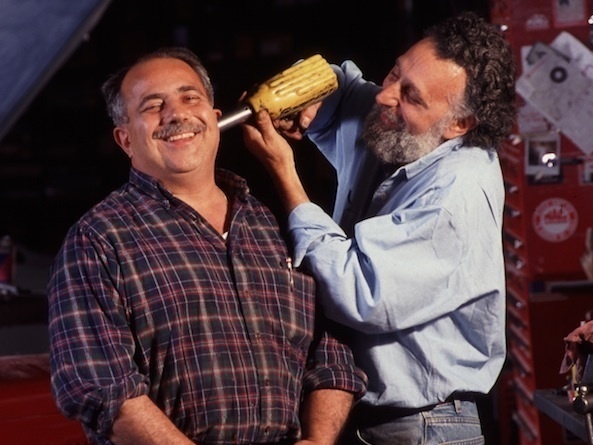 Tom (right) and Ray grew up great friends despite a 12-year gap between them. Both graduated from MIT before going into the car repair business.

"His laugh is the working definition of infectious laughter," says Doug Berman, the longtime producer of Car Talk. He remembers the first time he ever encountered Magliozzi.

"Before I ever met him, I heard him, and it wasn't on the air," he recalls.

Berman was the news director of WBUR at the time.

"I'd just hear this laughter," he says. "And then there'd be more of it, and people would sort of gather around him. He was just kind of a magnet."

The Magliozzi brothers grew up in a tough neighborhood of East Cambridge, Mass., in a close-knit Italian family. Tom was 12 years older, the beloved older brother to Ray. They liked to act like they were just a couple of regular guys who happened to be mechanics, but both of them graduated from MIT.

After getting out of college, Tom Magliozzi went to work as an engineer. One day he had a kind of epiphany, he told graduates when he and Ray gave the 1999 commencement address at their alma mater.

He was on his way to work when he had a near-fatal accident with a tractor-trailer. He pulled off the road and decided to do something different with his life.

"I quit my job," he said. "I became a bum. I spent two years sitting in Harvard Square drinking coffee. I invented the concept of the do-it-yourself auto repair shop, and I met my lovely wife."

Well, he wasn't exactly a bum; he worked as a consultant and college professor, eventually getting a doctoral degree in marketing. And Tom and Ray Magliozzi did open that do-it-yourself repair shop in the early '70s. They called it Hackers Haven. Later they opened a more traditional car repair shop called the Good News Garage.

They got into radio by accident when someone from the local public radio station, WBUR, was putting together a panel of car mechanics for a talk show.

"They called Ray, and Ray thought it was a dumb idea, so he said, 'I'll send my brother' and Tom thought, 'Great, I'll get out of breaking my knuckles for a couple of hours.' And he went over and he was the only one who showed up," Berman says.

Berman says the station liked what Tom did and asked him to come back the next week. This time he brought Ray. The rest, as they say, is history.

In 1987 Car Talk went national on NPR. The Magliozzi brothers were a huge success. Listeners loved their blend of humor, passion, expertise and just plain silliness.

On one episode of Car Talk, a woman called in because she had failed to pay a toll on a bridge and was worried about getting caught. Tom had the idea of calling the person in charge of the bridge. The ensuing conversation is hilarious.

'At The Last Minute, I Realized That I'm In A Coins-Only Lane'

When it came to cars, Berman says the brothers really did know what they were talking about. But, he says, that's not why people listen to the show.

"I think it has very little to do with cars," he says. "It's the guys' personalities. And Tom especially — really a genius. With a great, facile mind. And he's mischievous. He likes to prod people into honesty."

It is almost impossible to talk about Tom Magliozzi without talking about Ray. Berman says the affection you heard on the radio dated back to their childhood — and it was real.

"For Ray, he idolized Tom. This is the guy who introduced him to everything in life, and Tom liked having his little brother around," Berman says. "He liked the guy. So when they grew up they were really, really great friends."

Tom and Ray haven't done the show live for two years; Car Talk has been airing archives of old shows. Berman says Ray would like to continue doing that, as a tribute to his brother.