Accessibility links
Book Review: 'The Heart Does Not Grow Back' by Fred Venturini Fred Venturini's debut has a fascinating concept: What happens when a small-town kid gets amazing healing powers? But critic Jason Heller says the book never manages to explore that question fully.

'The Heart Does Not Grow Back' Could Use An Imagination Transfusion

'The Heart Does Not Grow Back' Could Use An Imagination Transfusion 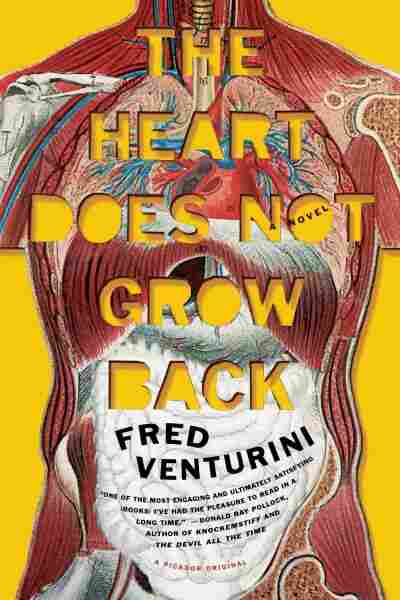 The Heart Does Not Grow Back

Title
The Heart Does Not Grow Back
Author
Fred Venturini

What would a young man's life be like if he suddenly found he could heal from any wound? It's a fantastic premise for a book, especially one as swift and easygoing as Fred Venturini's debut, The Heart Does Not Grow Back.

Dale Sampson is a nerdy schmuck living in a small Southern Illinois town who makes a stunning realization after being savagely beaten by a high-school bully: His injuries, no matter how major, heal far more rapidly and completely than ought to be possible. Venturini handles Dale's story with a casual mix of tragedy and low-key comedy, and his uncluttered prose helps push the first-person narrative at a brisk pace. As great as the concept is, though, The Heart Does Not Grow Back fails to explore it — or the potential of Dale's character himself – in a satisfying way.

The main problem with Dale is his inconsistency. The whole book rests on his regenerative shoulders — and hands and feet and organs, which he learns he can sell on the black market before eventually parlaying his superhuman ability into reality-show stardom. But his journey from gifted, adolescent nerd to damaged, struggling adult doesn't make much sense.

Granted, he suffers a huge trauma during his senior year in high school: He witnesses the rape and murder of the girl of his dreams, during which he himself is shot. It's not enough to explain, though, how his charming braininess disappears halfway through the book, never to return or even be acknowledged.

The book hinges on Dale's relationships to various women, yet the female characters are barely fleshed out. None of them — from the doomed Regina to her abused sister Raeanna to Hollie, the downtrodden recipient of one of Dale's televised organ donations — is given agency or dimensionality. They exist solely as some combination of sex object, helpless victim, and plot device. The degree to which Dale can or can't save them is their only purpose for existing in the story, and they barely have enough personality to make that existence worthwhile.

The only thing that's impressive about Venturini's portrayal of women is the how completely he ticks off the checklist of stereotypes: high-school heartbreaker turned rape victim, single mom with cancer, battered wife who can't leave her man.

It doesn't help that Dale, as much as the reader is urged to root for him, reacts to almost every woman he meets by assessing their sexual allure. Or worse, how sexually alluring he assumes they're trying to be. It doesn't jell with Dale's sensitive, white-knight character, let alone the would-be poignancy of the book's overall voice.

Then again, as the story progresses, that shallowness does kind of fit. One of the book's main plot threads revolves around Dale's vapid quest to lose his virginity. This does not bode well for a book, even a semi-comedic one, whose main character is a fully grown man — unless, of course, that thread is handled exceptionally well.

Here, though, Dale's ongoing attempts to get laid are about as developed as your average sitcom B-storyline. Much of the book suffers from a similar flatness. It's one thing for Dale to deal with a severe case of arrested development, but it's another to have every character in the book come off as walking clichés. The men in the book are largely boorish, if not downright bro-ish.

Even the book's two settings — Verner, Ill. (population 650) and big, bad Los Angeles — are depicted cartoonishly. "Writers wanted to direct, music stars wanted to be in movies, movie stars wanted to release albums," Venturini says of L.A., and that's as deep as he bothers to go, about anything. Even the book's final, revelatory sentence is Hallmark-card-worthy. Luckily, Venturini doesn't overextend himself too horribly much, and the book successfully breezes past many of its flaws, including a ludicrous twist of mistaken identity.

But there's so much promise to the idea that the sketchy execution is disappointing. For a novel that wants to probe the nature of healing in a grippingly speculative way, The Heart Does Not Grow Back could use a transfusion of imagination.

Read an excerpt of The Heart Does Not Grow Back