Accessibility links
GOP Takes Control Of Senate With Wins in N.C., Iowa, Ark., Colo. Republicans needed to pick up just six seats in Tuesday's midterm elections to wrest control of the Senate. In the House, the key question was how big the GOP majority would be next year. 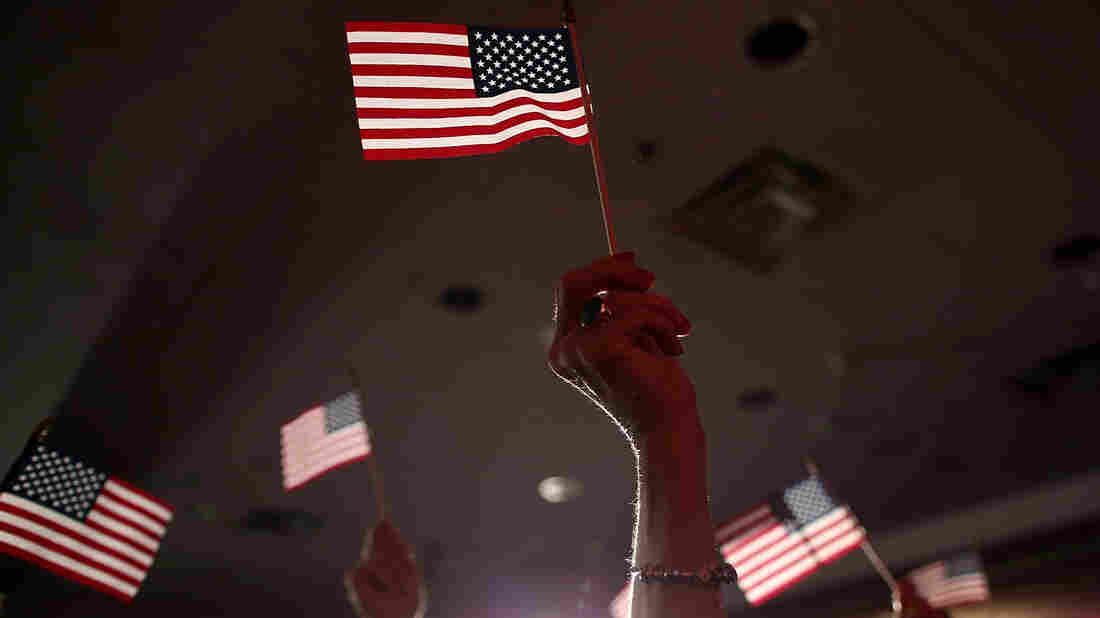 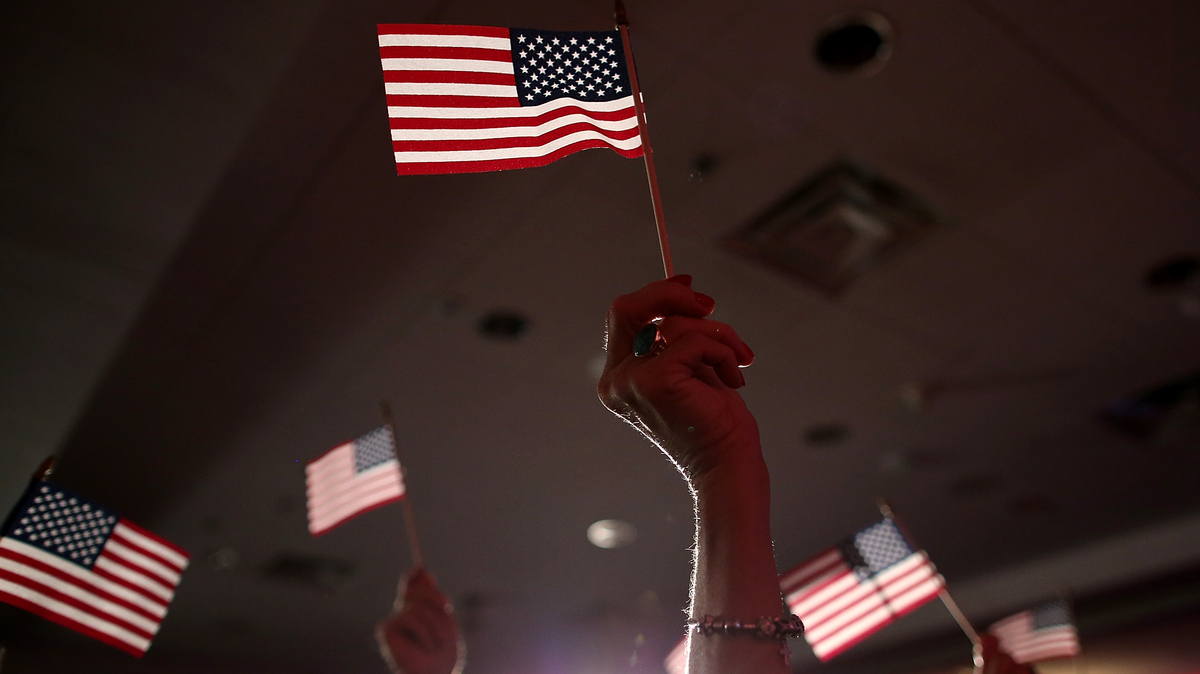 Republicans have picked up the seats they needed to retake control of the Senate and then some, with major victories in North Carolina, Iowa, Colorado and Arkansas, and added to their margin in the U.S. House. 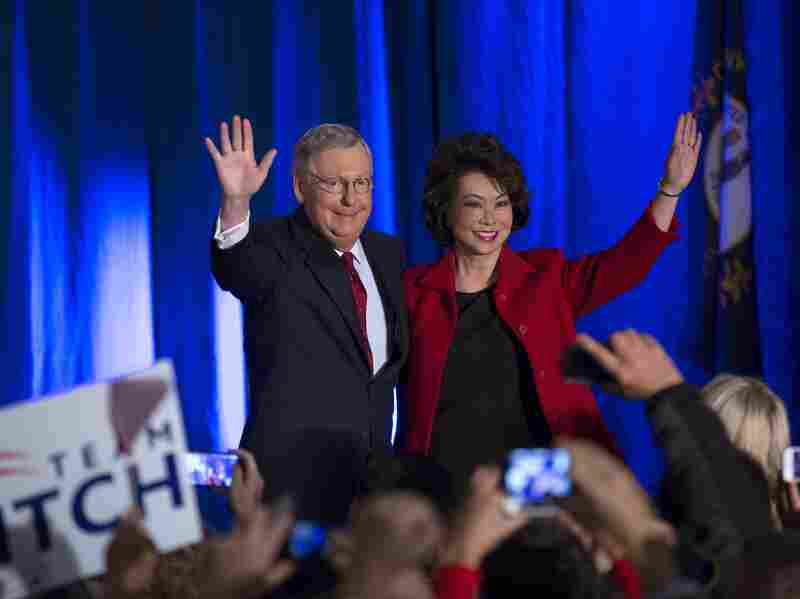 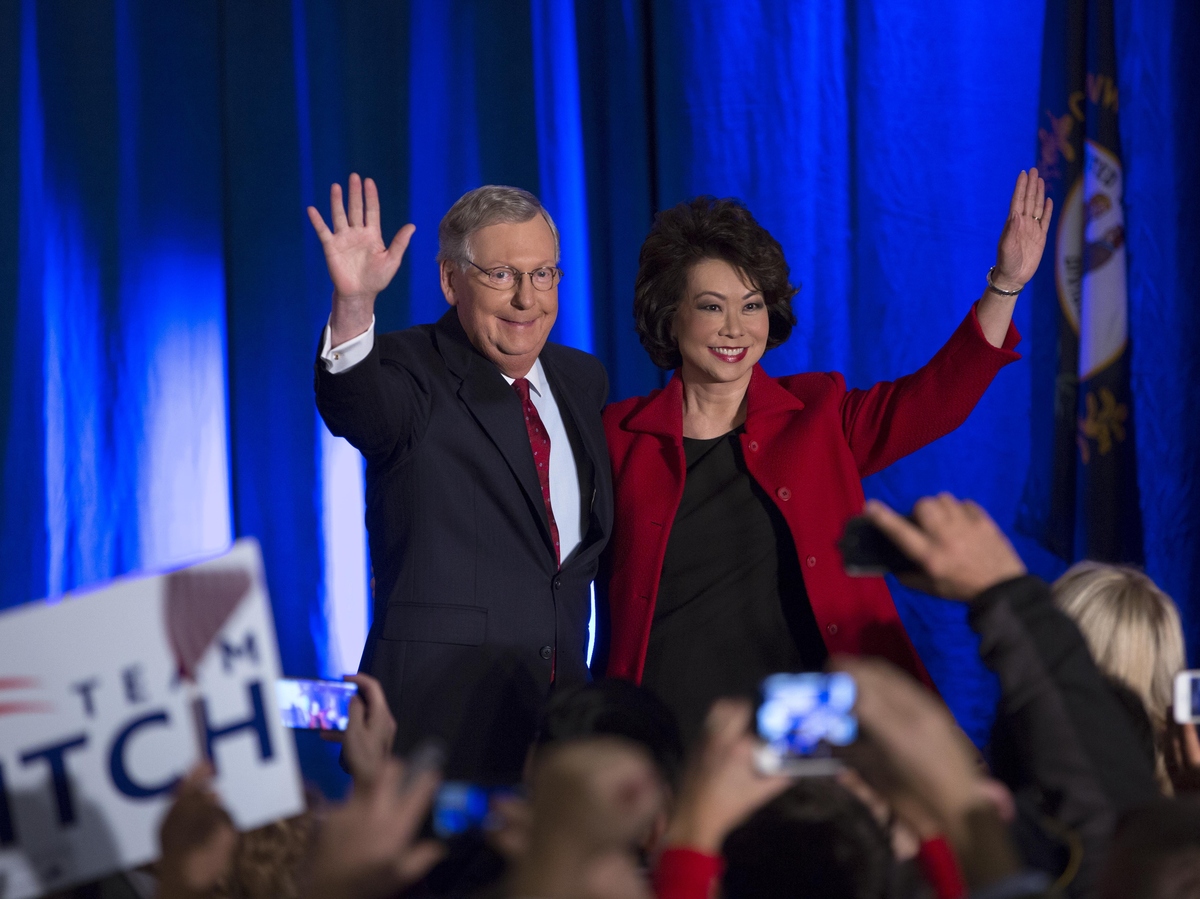 The big numbers from the midterm election reshape the political dynamic in Washington and will complicate the legislative agenda for President Obama's final two years in the White House.

"The American people have put their trust in the Republican Party," said Reince Priebus, the chairman of the Republican National Committee. "Republicans have been given the chance to lead the country in a better direction."

The GOP path to victory in the Senate ran through the South and then turned west, as Republican candidates posted larger-than-anticipated margins in races that political analysts thought might be headed for runoffs or long weeks of counting ballots.

One of them is in North Carolina, where Republican state House speaker Thom Tillis unseated incumbent Kay Hagan, in part by linking her to the president and his low popularity ratings.

In Colorado, challenger Cory Gardner beat incumbent Sen. Mark Udall. Gardner entered the race earlier this year and immediately changed the dynamic in the swing state by raising a significant war chest and hitting Udall on his support for the Affordable Care Act and other Obama administration policies. Udall responded by pitching himself to female voters and stressing his support for reproductive rights. But that strategy backfired when the leading newspaper in the state, the Denver Post, endorsed Gardner.

And in Georgia, businessman David Perdue fended off attacks about his record as a businessman and his support for outsourcing American jobs. Perdue defeated Democrat Michelle Nunn, whose father, Sam, served the state as a Democratic senator and who helped her win endorsements and campaign cash. Nunn had tried to cast herself as a moderate, highlighting her work for former Republican President George H.W. Bush and his Points of Light Foundation. Political scientists in Georgia and across the nation had predicted the race would be too close to call and steeled themselves for a runoff in January. But they were wrong, and Nunn conceded shortly after 11 p.m. EST.

A seat Republicans had pushed hard for late was New Hampshire, where Democratic incumbent Jeanne Shaheen beat back a strong challenge from Republican Scott Brown, who most recently was a senator from Massachusetts.

The results put a smile on the face of Kentucky Sen. Mitch McConnell, in line to become the Senate majority leader next year, fulfilling a years-long dream. McConnell tonight defeated challenger Alison Lundergan Grimes by a wide margin. The race opened for McConnell, 72, in the final weeks of the campaign, as he emphasized his clout in the Senate. Grimes, Kentucky's secretary of state, had tried to portray her opponent as a Washington insider who'd grown out of touch with the state. But Grimes suffered after she refused to say whether she had voted for the current president, Barack Obama, a misstep that drew national attention.

At his victory party, McConnell thanked supporters and adopted a measured tone, saying he and the White House "have an obligation to work together on issues where we can agree."

"Every election is a job interview, a very long one," McConnell said. "Just because we have a two-party system doesn't mean we have to be in perpetual conflict."

The Fight For The Senate

Republican Rep. Tom Cotton defeated vulnerable Democratic incumbent Mark Pryor. Cotton is an Iraq War veteran and rising star in his party who had been trending upward in polls. Pryor was the lone remaining Democrat to represent the state in Congress, and despite campaign support from Arkansas native and former President Bill Clinton, he's now out of a job.

In a critical victory for Democrats, incumbent Shaheen prevailed after an unexpectedly difficult race against challenger Brown. A former Republican senator from Massachusetts, Brown repeatedly tied Shaheen to failings by the Obama administration. But Shaheen's deep roots in New Hampshire politics proved too difficult for the newcomer to the Granite State.

McConnell, 72, handily won his sixth term in office by emphasizing his clout in the Senate and his support for the local coal industry. Challenger Grimes, Kentucky's secretary of state, argued he was out of touch with voters and, in one ad, that he didn't know how to brandish a hunting rifle. But Grimes paid a price for refusing to answer whether she voted for President Obama.

Neither candidate in the tight race for a Louisiana Senate seat reached 50 percent in the polls, prompting a December runoff between Democratic incumbent Landrieu and Republican Cassidy.

Landrieu had been vying for a fourth term in office and focused her energy on get-out-the-vote efforts in New Orleans. But she couldn't separate herself from the unpopularity of the White House. Now, political hands say Landrieu will be the clear underdog during the runoff in early December.

In Iowa, Republican Joni Ernst will replace retiring Democratic Sen. Tom Harkin, another GOP pickup. Ernst endeared herself to Iowans with savvy TV ads depicting herself as at home on the farm. That was an issue her opponent, Democrat Bruce Braley, fumbled when he appeared to disrespect the state's farming tradition. Braley, a former trial lawyer who has served Iowa in the House since 2007, struggled to overcome a public image that he was litigious and ornery — a characterization at odds with Iowa's Midwestern politesse.

And in a race that was not expected to be close, incumbent Democrat Mark Warner is clinging to a lead of about 12,000 votes over Republican Ed Gillespie out of more than 2 million cast. Recent polls had him leading by double digits. Warner has delivered a victory speech, but Gillespie has not conceded and may be entitled to a recount based on state law.

In the House, there was little suspense. Republicans currently enjoy a 234 to 201 majority and appeared headed to pick up another dozen or so seats.

"The president's low job approval rating has cast a shadow over the competitive landscape," said Nathan Gonzales of the Rothenberg Political Report. "The question is, how many seats do Republicans gain and are Democrats digging themselves into a hole it will take them multiple [election] cycles to get out [of]?"

Gonzales saw a rare chance, too, for House Republicans to diversify the overwhelmingly white and male caucus. He cited a likely victory by Mia Love, an African-American running for a House seat in Utah, and two openly gay GOP candidates. Results are not yet in for Carl DeMaio in San Diego but Richard Tisei, the former majority leader of the state House in Massachusetts, has conceded to Democrat and former Marine officer Seth Moulton.

Most incumbents, analysts say, are safe with a few prominent exceptions. One is Rep. Nick Rahall, a Democrat in West Virginia, who has been in the House since 1976. Rahall was ousted by Republican Evan Jenkins.

And in Georgia, John Barrow, the last white Democrat in the Deep South, lost to Republican Rick Allen.

New Hampshire Democrat Carol Shea-Porter, meanwhile, conceded to Republican opponent Frank Guinta. She lost to him in 2010 but defeated him in 2012. The race revolved around her support for the Affordable Care Act, a law she says represents her proudest accomplishment.

The Florida's Panhandle gave Democrats a rare victory, though, when Democrat Gwen Graham defeated two-time Republican incumbent Steve Southerland. Graham, a lawyer, enjoyed plenty of campaign cash and a boost from her father, retired senator and former Florida Gov. Bob Graham. Southerland, meanwhile, attracted controversy for a men-only fundraiser and other missteps on the trail.

In some of the biggest gubernatorial races of the evening, Republicans had still more reason to cheer. Two incumbents, Rick Scott in Florida and Scott Walker in Wisconsin, posted wins over challengers who drew national media attention.

Political science professor Alan Abramowitz of Emory University echoed many political analysts when he called the Florida gubernatorial race one of the most closely watched contests of the year. "Of all the governors' races, if I had to single out one, it would be Florida because it's such a big state and such a crucial state," he said.

In Florida, Scott prevailed narrowly after a long, colorful and costly fight against opponent Charlie Crist. Scott earned his fortune in the health care industry before refashioning himself as "one tough nerd." Crist was hoping to return to the governor's mansion as a Democrat after serving a single term as a Republican from 2007-2011.

And in Wisconsin, Walker won a second term and may have advanced his presidential aspirations in 2016. Walker rose to national prominence by picking and winning a fight against public employee unions in the state. Walker's unpopularity was huge in the blue-state capital, Madison, but challenger Mary Burke could not find enough votes elsewhere to stop him.

And in an upset political analysts had not predicted, Republican Larry Hogan will lead Maryland as its new governor, replacing retiring Democrat Martin O'Malley. Hogan had won support from the Republican Governors' Association and its leader, Chris Christie of New Jersey. His opponent, Anthony Brown, had campaigned alongside President Obama and other Democratic luminaries.

Pennsylvania offered Democrats one of their few bright spots all night, when beleaguered Republican incumbent Gov. Tom Corbett was defeated by Democratic businessman Tom Wolf. Corbett, a former state attorney general, served just one term but faced mounting criticism over his job performance as governor. Corbett had trailed in the polls all year.