Accessibility links
'Interstellar': Stunning And Bold, With Lots Of Corn Christopher Nolan's space-time epic is so beautiful and ambitious that it seems ungenerous to focus on flaws like its drippy homilies about love. 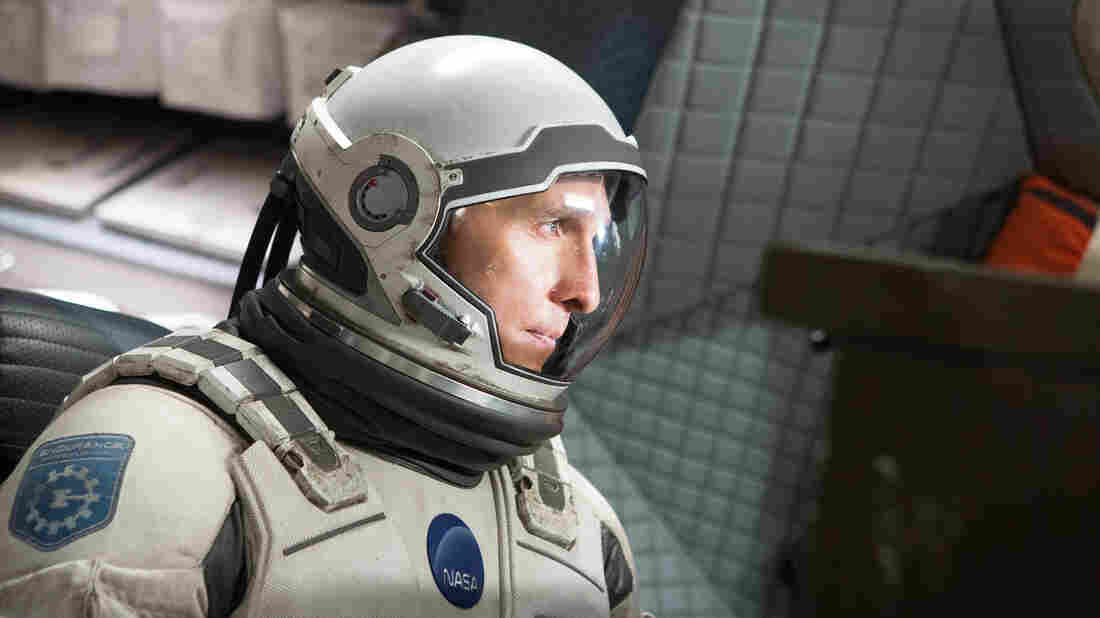 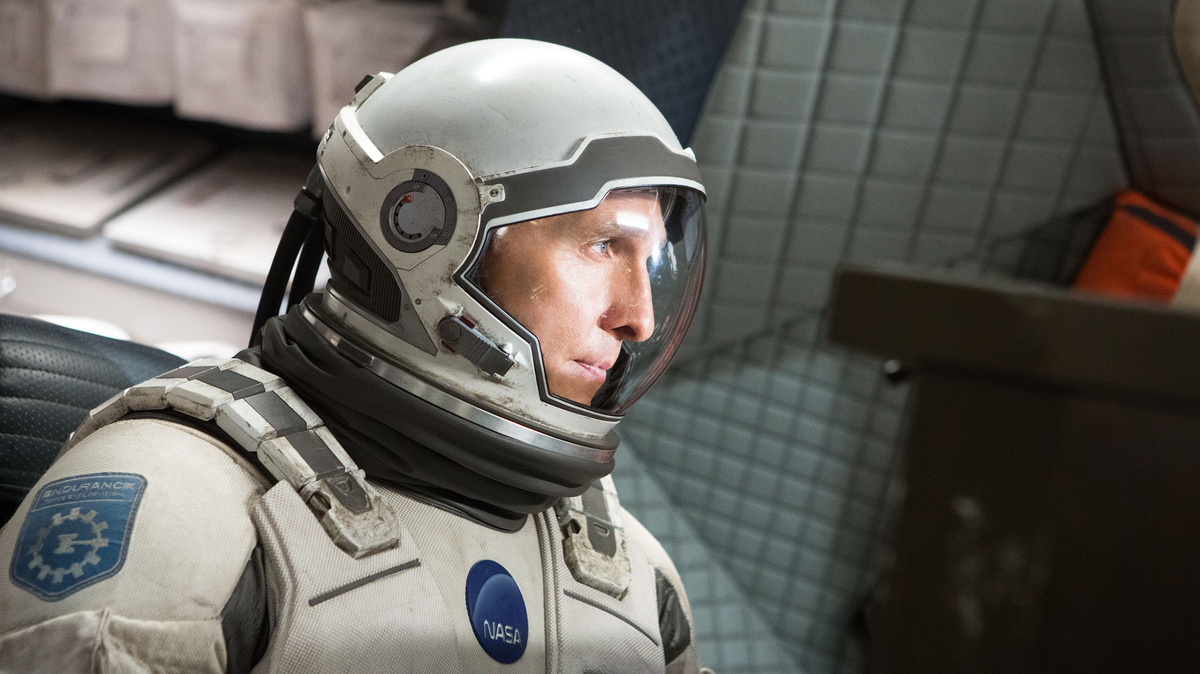 Time is a circle, just like Matthew McConaughey said in True Detective. But it isn't flat. It's spherical.

Interstellar, Christopher Nolan's saline-and-starlight-streaked space-time epic, is so beautiful and ambitious and enveloping that to tick down its imperfections — drippy homilies about how love, especially the paternal kind, can transcend dimensions; an over-investment in its widower McCona-hero's Chuck Yeager/Han Solo-esque expertise on the stick; abuse of a familiar Dylan Thomas quote — ultimately feels small. Released the week after two spaceflight disasters, one of them fatal, the movie is at once a hardscrabble vision of humanity's darkest night (it opens with talking-head clips from Ken Burns' 2012 PBS documentary The Dust Bowl cannily blended with new footage) and a forceful — if not wholly convincing — declaration that we shall outlive our home planet. Human Exceptionalism, you might call its philosophy.

And yet of all the (not that many) kinda-sorta-plausible-ish space exploration flicks to launch since 2001: A Space Odyssey — which predated Neil Armstrong's historic moonwalk by more than a year — Interstellar is the most mercilessly awe-inducing. Even if you gag on its payload of sentiment, as many have and shall, it is the film of 2014 that demands to be experienced on the biggest screen available. Nolan would prefer that you see it in 70mm IMAX if you can; Paramount is making a well-publicized exception to its recent switch to exclusively digital exhibition formats just for him. That's what three wildly successful Bat-movies buy you.

Christopher Nolan On Blending Reality Into Fantasy In 'Interstellar'

In the scenario cooked up by Nolan's brother Jonathan, with an intellectual kick-start from astrophysicist Kip Thorne, our spendthrift 20th century ways have caught up with us in the unspecified middle or late 21st. Global famine and food wars have drastically thinned our herd. Militaries have disbanded (say what?), and almost everyone — even hotshot former test pilots like our man Cooper, who remembers the Good Old Days even though he's only in his 40s — works the land, which now yields only corn.

NASA is a secret organization led by Michael Caine, Nolan's go-to man for gravitas. In fact, his character is literally a gravity expert, one who has spent decades trying to crack an equation that will enable humanity's migration to Somewhere Else. What's more, his team — Anne Hathaway, David Gyasi and Wes Bentley, plus a sarcastic military-surplus robot voiced and manipulated, at least in some scenes, by the brilliant, elastic-limbed clown Bill Irwin — have identified a dozen potentially habitable planets accessible via wormhole, those express lanes across the cosmos that Thorne has theorized. NASA's best guess is that the wormhole and the planets were put there for us by extraterrestrial intellects vast, cool and weirdly sympathetic. But they need Cooper's Right Stuff to get to Saturn, where the wormhole is. It's unclear who was going to handle the driving if an eventually explained series of mysterious portents hadn't led Cooper and Murph, his 10-year-old budding genius daughter, to their secret lair.

The Earthbound first act feels a lot like the Spielberg picture this was once set to be. (Also like M. Night Shyamalan's thriller Signs, starring America's favorite stoic widower circa 2002, Mel Gibson.) As with every Nolan movie, there's a clockwork narrative logic to it that eventually reveals itself, even if your willing suspension of disbelief has burned up by then.

Anyway, Cooper must leave behind his two kids — Murph and Tom, her less gifted big brother — to try to save the species. Kubrick wouldn't have wasted a tear on an equation as lopsided as that, but Nolan turns on the waterworks (and Hans Zimmer's church-organ score), cutting from the bereft Cooper's drive away from his Norman Rockwell-esque house to the countdown of his rocket. It's the first of many bravura dialogue-free moments that make Interstellar's 169 minutes feel ... well, like less than 169 minutes. (I saw it twice in three days and I was never bored.) Here's another: Their spacecraft, bearing the weary designation Endurance, pinwheels across the rings of Saturn while we hear the thunderstorm-sounds recording Gyasi is playing on his headphones.

I wouldn't have minded a bit if Nolan had lingered on these space vistas more than he does. (Cinematographer Hoyte van Hoytema, of Let the Right One In and Her, has composed frames well worth the extra few bucks to see them in true IMAX.) But he's got a supermassive (and highly spoilable) story to tell, one that keeps him rushing even given the lengthy run time. One thing Kubrick never was was hurried.

Iceland stands in for a pair of beautiful, forbidding planets, but its most stunning environments are computer visualizations born of legit science: Thorne gave the film's army of digital effects artists the equations to visualize both the wormhole and the black hole seen in the film, leading to breakthroughs in "gravitational lensing." Nolan had reserved the right to assert artistic license if the images Thorne's equations produced were too plain or simply too weird for audiences to process, but the objects his data generated — a shiny black soap-bubble in space, and a black hole with a fiery halo of starlight wrapped around it like the string of a yo-yo — are what we see. "This is our observational data," Thorne told Wired magazine. "That's the way nature behaves. Period." (This is not to say others don't take issue with the science on the whole, as astronomer Phil Plait does in Slate.)

Nolan made his name with Memento, a tricksy mystery that moved in two temporal directions at once. In the 14 years since, his movies have swollen to monumental scale, but he still compresses and elongates the fourth dimension more poetically than any other blockbuster-maker. Who better than him to make a film dealing so explicitly with relativity?

Other good sci-fi pictures have addressed the existential, sanity-testing loneliness of sailing across eternity in a can. Interstellar does that, too, but it's probably the first presumptive blockbuster to grapple, even clumsily, with the problem that everyone you loved back on your home world would almost certainly grow to surpass you in age. (It takes two years in cryo-sleep just to get to the wormhole, apart from the time-dilation problem.) Some of the consequences of this make for stirring, emotional stuff, even if the movie isn't as profound as it wants us to believe.

Nolan, a director often accused of coldness, finally got all mushy when he went to outer space. I can't solve that equation, but I've enjoyed trying to scratch it out.