Accessibility links
Answering The Old Question: Who Lost China? Richard Bernstein's new China 1945 looks at the momentous events of that year in Asia, and argues that the U.S. focus on fighting Japanese forces in China weakened Chiang Kai-Shek's Nationalists. 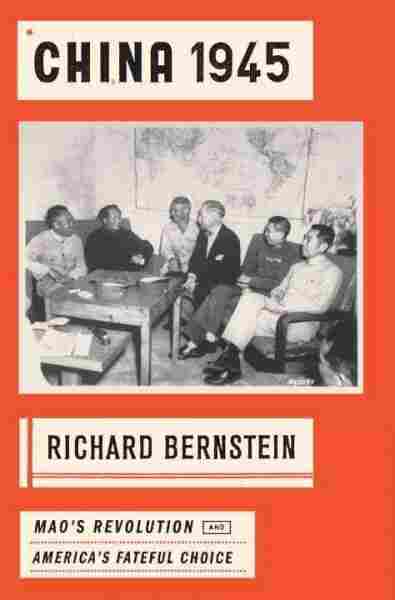 1945 was a momentous year in world history — particularly so in Asia, where Allied forces, having vanquished Germany, turned their attention to Japan. And in many ways, the main theater of action was China.

China at that time was divided between Chiang Kai-shek's Nationalists and the Communists under Mao Zedong. Both were fighting the Japanese – but they would soon turn on each other. In the meantime, they "competed with each other for the ears of American representatives, the dominant power in Asia by far" says Richard Bernstein.

Bernstein is the author of China 1945, an authoritative and engaging book that examines the slide into civil war between the Communists and the Nationalists — and how, despite the efforts of U.S. envoys and diplomats, "America and the future leaders of Asia's biggest country had entered into a quarter century of bitter enmity, and the prize that was China was already slipping away," he tells me in an email interview.

Some observers say the great battle of 1945 was not against the Japanese, but between the factions in China. Were the Allies mistaken in focusing on the Japanese during those crucial final months, and urging the Nationalists to fight harder – given that it weakened them in their coming fight against the Communists?

This is complicated, because the total American concentration on defeating the common enemy was entirely understandable, and so was the irritation that American leaders felt when, in their view, Chiang held his troops back from the anti-Japanese fight so he could fight the Communists later.

Still, there was a fundamental inconsistency in American attitudes toward Chiang. On the one hand, the U.S. regarded him as indispensable, the only person who could hold China together; and at the same time, American emissaries pressured him into political reforms and military actions that, he was sure, would have destroyed him.

The irony is that none of these pressures were put on the Communists; nor was it generally recognized that they were following the same strategy as Chiang, holding their forces in reserve so they'd be available for the civil war to follow.

Was a civil war always inevitable, despite the intervention of George Marshall?

There was no more prestigious or influential figure in the world than George Marshall, the architect of the victory in the war, so the fact that he failed to broker a deal between the two Chinese sides is itself strong evidence that, yes, civil war was inevitable, and for several reasons:

One, as some of the American China hands pointed out at the time, China had no tradition of democratic power sharing, so the expectation that either the Communists or the Nationalists would behave like American Democrats or Republicans was unrealistic to begin with.

Second, the goal of both parties was to rule China unimpeded by the other. Third, the hostility between the two Chinese parties was far more intense than any of the Americans on the scene realized.

And fourth, Soviet leader Joseph Stalin's vigorous, if often clandestine help to the Communists, which began right after the war, gave Mao great confidence that he could never be defeated militarily by the Nationalist government and he therefore had no real incentive to agree to any permanent compromise solution.

You argue that antagonism between the U.S. and China was inevitable even if we hadn't intervened in 1945. Could the U.S. have approached China and Mao's Communists in a way that would not have poisoned the relationship for decades to come?

Theoretically, yes, the U.S. could have been entirely neutral in China and that might have taken some of the poison out of the future relationship ... But practically speaking, under the circumstances ... that would have been utterly impossible. The weight of circumstance, the momentum of preceding events, required an American presence in China, and, once the war against Japan was over, the Communists were bound to see any such presence as hostile to their interests.

There was something larger at work here as well, and that something larger was the global contest for power and influence that soon came to be called the Cold War. Here too, theoretically, Mao could have decided to remain neutral, to stay equidistant from the U.S. and the Soviet Union, and to try to maintain at least non-hostile relations with both. But for both practical and ideological reasons, Mao chose, as he put it, "to lean to one side," the side of the Soviet Union, and that ensured that he and the Americans would end up bitter antagonists.

Where do you put the blame for Mao's siding with Stalin?

I blame Stalin primarily, but Mao as well. The main driving force of history in the months following the end of the war in both Europe and Asia was Stalin's diabolically skilful effort to expand Soviet influence, by putting subservient Communist parties into power in the countries bordering the Soviet Union.

And, as Averell Harriman, the American ambassador to Moscow, put it, "the Soviet program is the establishment of totalitarianism, ending personal liberty and democracy as we know it." Harriman was absolutely right. The Soviet program was profoundly inimical to American values and ideals, and while Mao broke with the Soviet Union after Stalin's death, the establishment of totalitarianism was Mao's goal as well.