Accessibility links
Politics And A Food Fight Are Stalling A Major U.S.-Asia Trade Deal Supporters of expanded trade with Asian nations hoped this week would bring completion of a major deal, but U.S. and Japanese negotiators — and Obama and congressional Republicans — still don't agree. 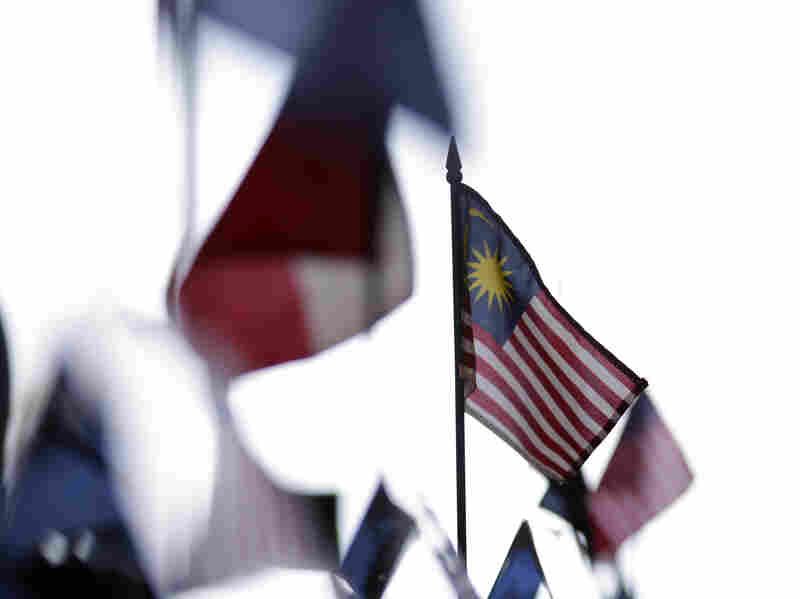 A Malaysian flag sits on a table among other flags during a news conference at the Trans-Pacific Partnership Free Trade Agreement talks in July 2012 in San Diego. Nearly two and a half years later, the deal remains incomplete. Gregory Bull/AP hide caption

Earlier this year, some trade supporters had predicted this week's APEC summit would bring a breakthrough on a comprehensive trade deal.

They had hoped that when the 21 global leaders met at the Asia-Pacific Economic Cooperation Summit, Obama would be able to use a smaller side meeting to conclude the Trans-Pacific Partnership, a trade deal involving the United States, Canada, Australia and New Zealand, as well as eight Asian and Latin American countries.

But the deal wasn't reached, and there's no telling when it will be.

"There are still significant divides that need to be bridged, especially between Japan and the United States," said Joshua Kurlantzick, a Southeast Asia expert with the Council on Foreign Relations.

The dream of a free-trade zone stretching from Asia to the Americas keeps getting tripped up by the stalemate over farm exports. The United States wants Japan to lower barriers to agricultural imports, including rice, pork, beef, dairy and sugar. But Japan wants to protect those sensitive food products.

The problems aren't just at the negotiating table — Obama also has a lot of political resistance to overcome at home. Many groups representing consumers and unions oppose the trade pact.

U.S. And China Move Toward Ending Tariffs On High-Tech Gear

Previous presidents have had that authority, which gave them the ability to complete a deal and then present it to Congress for a simple yes-or-no vote, with no amendments. But the White House hasn't had that ability for new deals since 2007, or for existing negotiations since 2011.

Obama wants Congress to renew the now-expired power, but Tea Party Nation President Judson Phillips and other conservatives put out a joint statement in opposition of "giving the president even more power to bypass Congress and enact his open borders agenda."

Whether Obama can put together a coalition of enough Democrats and Republicans to renew his trade-promotion authority in the new Congress is not yet clear.

"Any trade deal is hard to pass in the United States," but with Congress still so divided, a politically weakened Obama will have an especially tough time with TPP, Kurlantzick said.

President Obama said on Monday that he still sees success for the Asian trade deal.

"I just met with several other members of the TPP who share my desire to make this agreement a reality," Obama said. "We're going to keep on working to get it done."

Leaders of the 12 nations participating in TPP issued a joint statement saying they are "intensively engaging" in talks, but offered no deadline for completion.