Accessibility links
Jon Stewart's 'Rosewater' Reach Exceeds His Grasp Daily Show host Jon Stewart directs Rosewater, the story of a journalist who appeared on The Daily Show and was later imprisoned in Iran for months in 2009 while covering protests there. 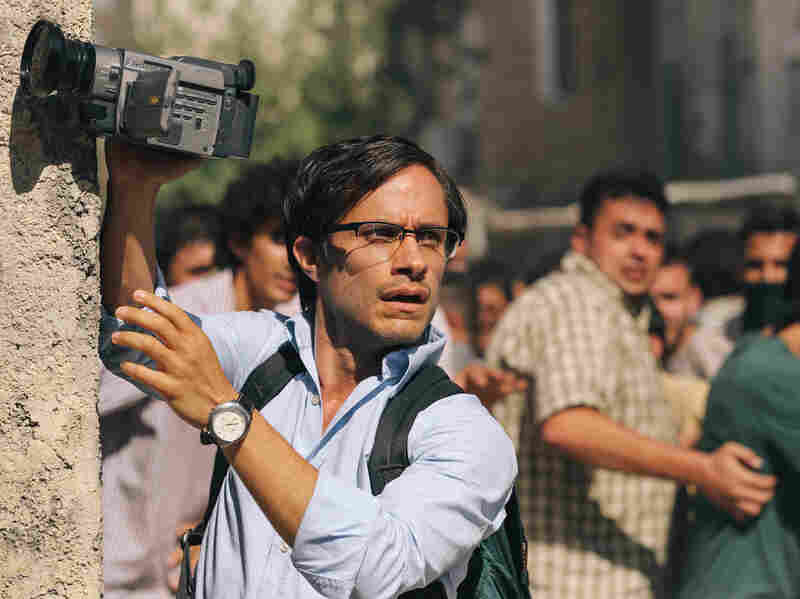 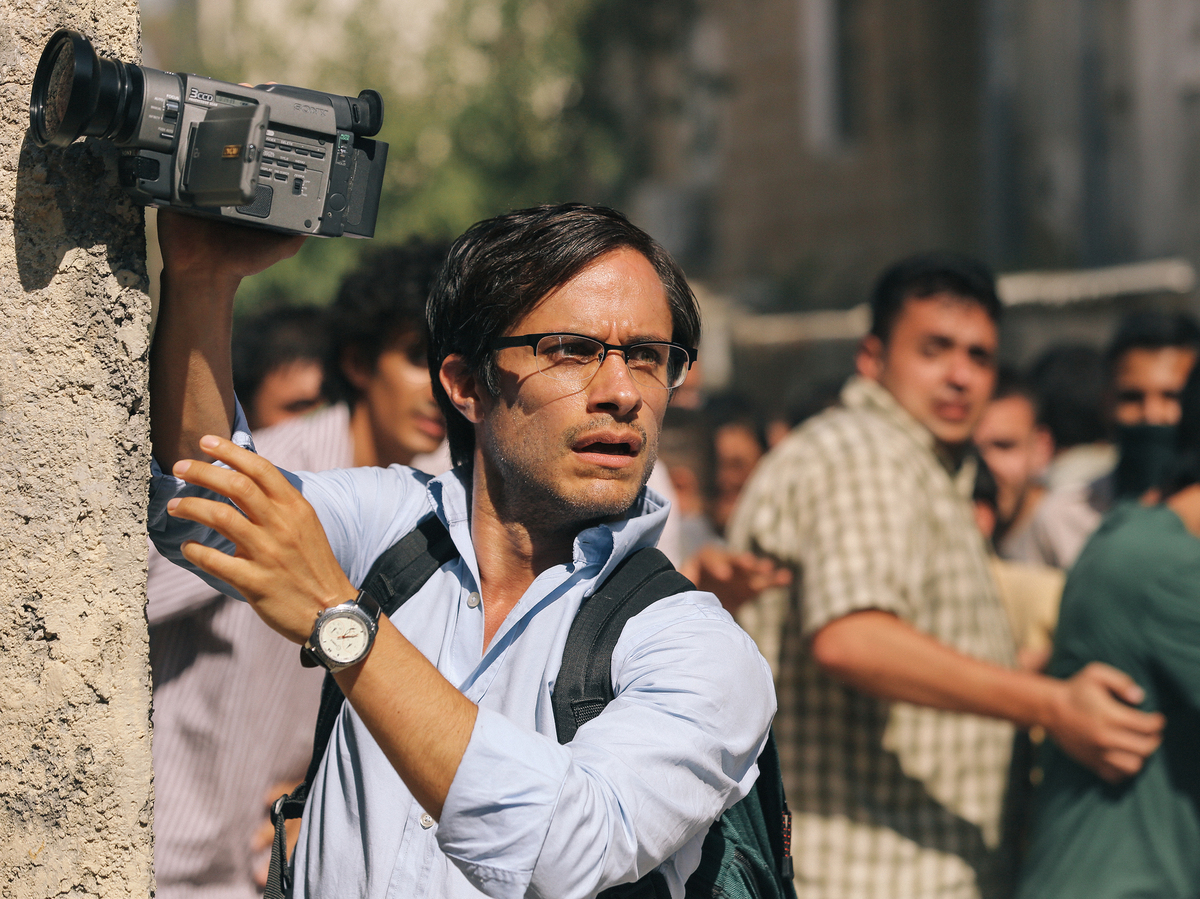 There's undoubtedly a farcical element to the true story told in Rosewater that makes it seem like the ideal directorial debut for Jon Stewart.

The film is about Maziar Bahari (Gael Garcia Bernal), who was jailed in 2009 in Tehran while covering the Iranian elections that would eventually spark widespread protests in the country. Bahari, an Iranian-Canadian based in London, was arrested after filming protests. But Stewart's best-known connection to the story (which he adapted for the screen from Bahari's memoir) is that a satirical interview that Bahari filmed with the Daily Show's Jason Jones, which is re-created in the film, was used as evidence of his collusion with American "spies."

It's hard not to laugh at that confusion, but considering that Bahari was held in solitary confinement for 118 days, that he was tortured physically and psychologically, and that he was ultimately coerced into recording a confession admitting that he had betrayed Iran, the joke is a very dark one. In Rosewater, Stewart shows no signs that he can handle such tonally complex material.

There are moments in Rosewater where Stewart's trademark wit shines through, but he largely avoids satire here, opting instead for lighthearted sincerity. The film begins with Bahari's arrest before flashing back to show his arrival in Tehran and the buildup of tension before the election, in which the hard-line incumbent, President Mahmoud Ahmadinejad, faced serious competition from opposition candidates. Stewart shows us Bahari interviewing both the young anti-government activists who set up illegal satellite dishes to receive foreign news and the representatives for Ahmadinejad who refuse to admit any problem or accept any criticism.

The mood is largely optimistic in these opening scenes even as it's clear that a dark turn is coming in the story. At one point, during a montage of demonstrations in Tehran, a web of hashtags like #democracy and #protest floats by on screen. The sense here is of a government that's out of touch, and an opposition that's the obvious future of the country.

It's all pretty tepid until the movie turns to Bahari's incarceration, at which point Stewart's choices become more disconcerting. The issue is not necessarily one of treating Bahari's story tastefully; in fact, Stewart may have been too tasteful here. He packs jokes into a horrific situation, but never any that come close to ruffling feathers. Instead, they're predictable knocks against the kinds of insular interrogators and government officials that wouldn't be able to recognize the Daily Show's satire.

It's also not necessarily a problem of Stewart's choosing the wrong tone entirely. Rather, he vacillates between too many of them. When Stewart features news footage of a debate between Ahmadinejad and one of his main challengers, opposition leader Mir Hossein Mousavi, or real video of the violence against those protesting the contested election results, the most serious concerns surrounding Bahari's arrest come into view. But in other moments, Stewart takes a more dismissive approach, treating Bahari's interrogator, for example, as an unappreciated buffoon looking for recognition from his superiors. In those moments, Stewart seems to want to turn these men into trifling figures, refusing to give them even the benefit of serious treatment. There are times, too, when the film takes a more broadly inspirational tone, addressing itself to Bahari's resolute spirit — itself an allegory, it would seem, for Iran's quelled opposition.

One can imagine a film that combined these various approaches into a cohesive story, but in Rosewater they're blindly tossed together, and the result neither portrays the suffering of Bahari's incarceration adequately nor lampoons the absurdities of the situation.

Even if nothing in Rosewater makes you question Stewart's good intentions in making the film, it's hard to shake the the feeling that by taking a summer off from the Daily Show to film the movie in Jordan, Stewart performed the equivalent of parachute journalism and cobbled together what plays as a watered-down version of Bahari's story.

There's little chance you'll emerge from Rosewater knowing much more about Iranian politics than when you started. The film admirably protests censorship and political repression, but it doesn't push very hard to reveal new truths. It only superficially gets into what drove the protests Bahari was covering. And while it eventually acknowledges that the story of a foreign journalist with governments and international activists calling for his release says little about life for Iranians under the current regime, the admission comes late in the film and simply leaves it to other movies to dig deeper into the story.

And, of course, many have, including recent films like Manuscripts Don't Burn and Closed Curtain, both made by Iranian dissident filmmakers who have worked in defiance of official bans. Those are stories that open a window onto a closed society. The usefulness of Rosewater, meanwhile, seems limited to telling the story of one journalist who crossed paths with a well-connected American.